It’s all a bit murky in the smartphone market right now. Photo by Moyan_Brenn on Flickr.

The arrival of 2016, and the dramatic slowdown in the smartphone market in the US and China, is putting brand new pressures on the bigger players, though more noticeably on the smaller ones.

Inasmuch as nobody who isn’t Samsung, Apple or (I think) Huawei is making money at scale from smartphones. All of the “small big” players such as LG, Sony, Lenovo/Motorola, HTC, and – I’m fairly certain – Xiaomi are losing money. Of the first four named above, their collective loss on smartphones in Q1 2016 was $850m (all prices are given in US$ throughout); and for Xiaomi, which sold fewer than in the same period in 2015, at an ASP (average selling price) below everyone else including Lenovo/Motorola, it’s hard to see that it could have scraped a profit.

Not only that, but Apple finally came under pressure: both its smartphone shipments fell (despite a fair bit of inventory stuffing) and so did its ASP, from over $690 in the fourth quarter to just over $640 in this one, the lowest value since it introduced the larger-screened 6 series phones in September 2014.

Samsung meanwhile sailed along, pushing almost as many phones out of the door and seeing only mild erosion year-on-year of ASPs. Notably, Samsung’s profits were their highest since the second quarter of 2014 – helped, surely, by the decision to push the Galaxy S6 flagship out before the quarter ended.

So first the numbers.

Assumptions:
Samsung: featurephones (estimated 18.1m of them) sold for $15, made a profit of $0 each. If their ASP is higher, the ASP of the smartphones is lower; if their profit is higher, the per-handset profit for smartphones is lower. For tablets, the assumption is the 6m shipped had an ASP of $200, and show zero profit. If they sell for a higher price, phone ASPs are lower; if they make a profit, per-handset profit is lower.

Apple: profit margin per handset of 28%. This is a longstanding historical figure worked by analysts better at this stuff than me. It will actually vary by quarter, depending on phone mix, how new the phones are, and storage (more storage = better profit margin). But this is a usable rule of thumb.

LG: sells no appreciable number of tablets, and doesn’t make a profit or loss on them. (In Q1 2015 it shipped 1.4m tablets, which didn’t have an appreciable effect on anything.)

HTC: shipments had to be estimated based on its (woeful) revenues. I’ve said previously that I don’t think HTC will ever make a profit again in smartphones, and nothing I’m seeing makes me feel I was wrong.

Microsoft Mobile: featurephones (15.7m of them) had an ASP of $15, and made zero profit. Lower featurephone ASP would mean higher smartphone ASP. Any profit would mean more losses for smartphone handsets. Lots has to be assumed about Microsoft’s handset business, including gross margin (I assumed $50m on its $500m smartphone sales – possibly generous), and R+D costs and sales/general/administrative costs (assumed $50m and $75m respectively). The numbers still don’t work in its favour, even though a year ago those figures were over $500m together.

There’s one other notable Microsoft comment in its 10-Q: “Patent licensing revenue decreased 26%, due to a decline in licensed units and license revenue per unit.” That would be Android handsets paying a licence. Whether that’s due to Huawei rising and not having a patent deal isn’t clear. But it’s one to watch.

The takeaways from this only become clear once you look at the longer-term trends. Android OEMs losing money isn’t new, though Lenovo’s continuing inability to turn Motorola into a money-making (or “not money-losing”) proposition suggests that some things are eternal.

To do that, we have to graph what has happened since 4Q 2015 (the first quarter for which I began collecting this data.)

First though, the handset landscape – as in, how many handsets do these people shift? Best seen in graphical form, so you can get an idea of who’s rising, or falling, or what-the-helling.

For phone ASPs, I’ll introduce a new measure – the “blended Android ASP”, which is the weighted average ASP, found by taking the available revenues for Android OEMs, and dividing by the total number of handsets shipped by those OEMs. Samsung tends to weigh heavily on this. I’ve included Xiaomi by assuming its ASP was $160 during 2015, falling to $157 in Q1, based on information from analysts. For Huawei, there’s no data except for Q1, when its ASP was $208.

This can be a little difficult to read, but you can see clear trends: Sony is the only company which is consistently raising its ASP. Even Apple is seeing a trend where it falls, while Microsoft in the past couple of quarters has done that. But for both, that has come at the cost of, well, profit.

Let’s see if when you compare the ASPs to the “blended” Android ASP, so you get an idea of how the prices change relative to the known ASPs. (This is not the ASP for all Android phones all over the world – for that you’d have to pay $$$$ for an analyst report from IDC or Gartner.) 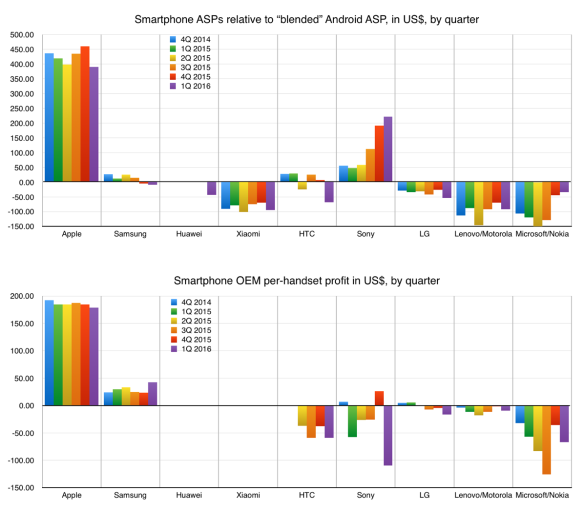 ASPs first: what’s pretty clear (and expected) is how far above the crowd Apple is; how Samsung’s figures tend to dominate the sector; how Sony’s are climbing; and how Xiaomi and Lenovo/Motorola are well below the crowd.

Sony has a strategy of raising ASPs in order to find profit somewhere, somehow, up there. Trouble is, it keeps not managing to. Microsoft ditto (perhaps). The problem they both have is that they’re selling fewer handsets over time, which makes profit harder to achieve because your fixed costs (overheads such as staff, administration, buildings etc) don’t shrink in the same way.

I’ve assumed that Xiaomi’s ASP was $160 throughout 2015; the figure for the first quarter of this year comes from IDC. That $160 figure makes sense: in June 2014, Bruce Einhorn at Bloomberg was comparing Huawei and Xiaomi (in a piece that seems prescient now) about Huawei’s insistence that it could be China’s top smartphone brand, and noted that

Huawei may not be able to compete with Xiaomi’s razzle-dazzle, but the Shenzhen-based Huawei has made big strides of its own in building its brand and making cool handsets. Last year it launched the Ascend PG, which Huawei said was the world’s slimmest smartphone, with a depth of just 0.24 inch (6.18 millimeters). In the first quarter of 2014, Huawei shipped 13.5 million smartphones, compared with Xiaomi’s 10 million, according to Bloomberg Industries. At $155.30, the average selling price for Huawei’s phones is slightly less than Xiaomi’s $159.60. And like Xiaomi, Huawei now sells most of its phones under its own brand. Three years ago, most of the handsets Huawei sold carried operators’ brands, with only 30% using Huawei’s own brand. Today, 95% of Huawei phones use the Huawei brand.

Note that Xiaomi’s ASP hasn’t shifted in those 18 months; by contrast, Huawei’s has rocketed, from that $155 to $208 now (according to IDC).

For profit, the picture – unless you’re Apple or Samsung – remains unrelentingly grim. Although we don’t know how it looks for Huawei and Xiaomi.

For Huawei, its only known ASP (that I have; if anyone from IDC/Gartner wants to send more details, please do) is at a level where at best you’re breaking even. Given the colossal volume Huawei has managed in smartphones – it’s now the third biggest – it could have hit the economies of scale necessary to go past breakeven.

Xiaomi, meanwhile, is venture-funded, and selling at a very low ASP, and has seen sales go into reverse in the first quarter compared to the previous year. ASPs have followed. Even if you think that its model of selling online is clever, it’s hard to see that it would be making a profit. But we don’t know.

In the end: it looks dark

Looking at the handset shipment graphic, one would have to say that HTC, Sony and Microsoft are all heading towards the exit. They’re bigger than a lot of small players out there (OnePlus, Micromax, etc) but they’re trying to play on a global scale, and that’s very expensive. Even Lenovo, which is discarding Motorola parts as fast as it can, struggled in its home market of China and is now casting around for other places to sell.

LG seems to want to be in the game, but Xiaomi is challenging it, and Huawei has already overtaken it. All that is saving it is the fact that the smartphone business is part of a conglomerate that also makes air conditioners, washing machines, TVs and so on.

The really interesting one is Apple. Its ASP finally dropped – and by quite a bit. Its shipments fell – and again, by quite a bit (it only got where it is by stuffing the channel). Its per-handset profit dropped, in line with the ASP.

The question that keeps being asked is: how long can Apple stay above the fray? But the answer comes back, again and again: probably a lot longer than others can stay in the game.

Would you fund this?

If you were shown those graphics and asked who you’d like to be backing, it probably wouldn’t be Xiaomi; you’d want to be up there with Apple and Samsung, where the money is good and prices are high. But building a premium brand is the sort of thing that you wanted to start doing 30 years ago (at least).

I’ll admit I’m puzzled by the determination with which companies like Sony and LG and HTC stick to the smartphone business. If you’re losing money regularly, why do it? Perhaps it’s a fear of what comes afterwards – of the void beyond. Even BlackBerry is refusing to get out of the handset business, even though it barely generates gross margin on each handset (that is, hardly covers the costs of the actual device, never mind the sales/distribution/research process that gets it to someone).

Here in the UK we’re about to find out what #Brexit means; a leap into the void beyond. Maybe some smartphone makers are similarly worried about what happens if they stop making phones. Or it’s just too expensive to wind it all up, and safer to take small acceptable losses rather than big company-defining ones. (It’s the same approach that has seen once-big names in the PC business such as Toshiba simply rein in their distribution and manufacturing there.)

So maybe this is how the smartphone business ends for the companies which aren’t Apple and Samsung but which were early into the business: not with a bang, but a whimper.