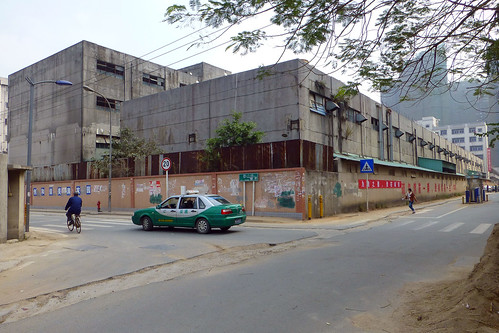 Apple’s “iPhone design patent” fight in China is against a vanished company that might have been located in this road in Shenzhen. Photo by dcmaster on Flickr.

Has the “affordable” smartphone let us down? • Android Police

»Who’s to blame for the promising ZenFone turning into a bloatware-ridden pile of bugs languishing on Lollipop, seven-plus months since Marshmallow was released? What’s the reason Alcatel’s relatively unbloated Idol 3 took nearly as long to get Marshmallow itself (mine still doesn’t have it)? How did the OnePlus end up the poster child for QA issues, compromise, poor customer service, and slow updates? Why did it take deliberate public shaming to get Motorola to update the Moto E, and even then, not in every country? How did Motorola end up being sued for $5 million over poor warranty support? Why did HTC decide not to renew its promises of rapid Android OS updates on the new 10, all while pricing it at a seemingly obscene $700? Why is Sony trying to charge $550 for for what is, at best, a $400 phone with the Xperia X?

The answer, of course, is money. It has nothing to do with companies “hating” customers. It’s not about whether or not they “care” about you – no multi-billion dollar corporation does, and it’d be silly to assume they did. It’s just dollars and cents. How many customers will I lose by not updating this phone? How much money will I save? How much damage will my brand sustain? How much bloatware do I need to put on here to make this product financially viable? Where can I cut costs on support and reduce warranty claims?

…I have come to think my faith in the cheap smartphone has been largely misplaced. Perhaps it was naive to assume that companies whose business model is to make money on the physical product they sell – and not the things you do with it – wouldn’t be so short-sighted. But they’re proving to be just that.

Ruddock is always good value.
link to this extract

»When a Beijing regulator recently ruled against Apple Inc. in a patent dispute, it handed a victory to a Chinese company that barely exists.

Baili and its parent, Digione, are part of a rapid boom and bust in China’s new wave of smartphone makers. When Baili took on Apple in December 2014, telling Chinese regulators that the Cupertino, Calif., company’s new models infringed on its smartphone design patents, it had bold aspirations, a big-name investor in Chinese internet giant Baidu Inc. and a team of experienced executives.

By the time regulators reached a decision this year, Digione had collapsed, brought down by buggy products, mismanagement and fierce competition, according to former employees and investors.

Weird but not unlike patent trolls in the US and elsewhere.
link to this extract

»At first glance, it would appear that Apple has all the ingredients in place to move beyond the iPhone. Apple’s industrial design capabilities continue to be industry-leading, and WWDC began to peel away some of the mystery surrounding Apple’s path for incorporating deep learning into its services. However, there are two big risk factors that need to be monitored very closely.

Apple remains a resource-strained company. The most valuable resource is time and energy. Given the company’s functional organizational structure, management has tangible limitations as to the number of projects that can be undertaken at any one time. As seen in the Apple Experience era diagrams, it would not be a stretch to see the number of blue circles, representing Apple hardware form factors, to increase. However, at a certain point, Apple will begin to find that it is unable to expand in new areas while still supporting legacy industries or products. Management is quite vocal that Apple says “no” much more than “yes” when it comes to new products. In addition, the company is not afraid to cannibalize its own products. These statements will likely be tested in the coming years.

»I am here to tell you the first thing you need to do if you want meaningful gun control legislation to be passed in America.

If you want to personally do something that will help, here it is:

You Must Learn How To Use a Gun

Almost every gun control advocate I know hates guns and wants nothing to do with them. They are vaguely (or very) afraid of them, and believe that if they fire a gun or buy one, they will suddenly become a gun nut or turn evil.

That is nonsense. You need to understand guns intimately if you want to regulate them.

This kind of thinking is common sense when it comes to making laws about anything else, yet somehow it flies out the window when it comes to regulating something as simple and dangerous as guns.

Being a gun owner who doesn’t believe in the Second Amendment is really lonely.

He makes a lot of excellent points; we decry legislators who try to regulate crypto without understanding it, yet think it’s obvious whether you should legislate against hollow point bullets and AR-15s. I learnt a lot.
link to this extract

Bryson Gardner is co-founder and CEO of Pearl, whose co-founders used to work at Apple getting the iPod and iPhone out, and now want to get cars to be better sorted:

»Cars last longer than ever and are quickly left behind by the rapid pace of new technology. The industry’s ability to keep them up to date is fundamentally limited by 6-7 year design cycles and how few new cars are produced and bought every year. Historically new features, from airbags to antilock brakes, have taken 30-40 years to reach widespread adoption. The future will be no different, unless we re-think things.

While we see great promise in autonomous vehicles, recent reports project only 4% of the 2 billion cars in the world in 2035 will be autonomous. That leaves more than 95% of the cars without autonomous features nearly 20 years from now.

Should we really be waiting this long? Why not use the very same technological building blocks of the autonomous future to help every driver on the road today? ADAS technologies, such as the backup camera, blind spot warning and forward collision warning, are available in some new cars and have clear benefits, and these new technologies are just too important to limit to only new cars.

They’re starting with rear-view cameras, priced at $500.
link to this extract

Jeff John Roberts isn’t saying that Taylor Swift is a mistake, but that the advert attacking YouTube is:

»Here is what the ad will say, according to Billboard:

“[The law] has allowed major tech companies to grow and generate huge profits by creating ease of use for consumers to carry almost every recorded song in history in their pocket via a smartphone, while songwriters’ and artists’ earnings continue to diminish.”

The ad campaign will reportedly also press Congress to use an ongoing review of copyright law to tilt the rules to be more in favor of musicians.

This spectacle of Swift and other A-listers pleading for “reform” will no doubt make an impression on the country’s lawmakers. But that doesn’t mean they should listen. What the music industry is doing is making mischief with an important law in order to put business pressure on YouTube.

The law, as many people are aware, is called the DMCA (the “Digital Millennium Copyright Act,”) and it serves to protect websites like YouTube and Facebook from getting sued when someone uploads a song or video without permission. According to music industry types, YouTube exploits the law to turn a blind eye to piracy and get rich in the process. That’s why, they argue we need “DMCA reform” to put a stop to this.

It’s a compelling argument. But it’s just not true.

He’s right – what the music business wants is for YouTube to pay out more per play.
link to this extract

»the environment we live in is already being transformed at an astounding rate. For instance, the death of the high street owing to the growth of eCommerce, is often lamented. But new technologies are actually making high streets more accessible, more engaging and more personal than ever before.

For proof, look no further than the rapid rise in campaigns linking out-of-home (OOH) media to mobile marketing. Kinetic recently formed a partnership with Exterion to experiment with beacons used in conjunction with digital out-of-home (DOOH) media. Eventually we will be able to know exactly who is standing in front of a screen at any given time, personalise digital copy based on in-app activity, and serve useful messaging that is unique to every individual.

In the future, knowing you are heading out shopping, the screens on your route would serve you intuitive nudges to remind you of vital items missing from your connected fridge or your cupboards, and share information like in-store discounts, details on busiest shop times or new stockists.

I’m giving this a no-way-Jose.
link to this extract

Pando memberships: one year on • Pando

1) Our reporting was increasingly an adversarial anomaly in an access journalism world. We’d had threats of pulling ad dollars from us before, called the bluff of those making the threat and still managed to survive. But one day our luck would run out: A major advertiser would cave to pressure (or would find themselves the subject of a negative story on Pando) and yank their spending with us.

2) Most of our advertising and sponsorship customers were newly public SAAS based businesses or ones hoping to go public. And some sort of correction was on the horizon. Our then-multi-million dollar a year ad business had grown year over year at a nice clip. But it was gonna get crushed in 2016.

Oddly enough, their mixed model is very like that of the Economist, which doesn’t rely on ads.
link to this extract

The worst thing I read this year, and what it taught me… or Can we design sociotechnical systems… • Medium

»I found Shane Snow’s essay on prison reform — “How Soylent and Oculus Could Fix the Prison System” — through hatelinking. Friends of mine hated the piece so much that normally articulate people were at a loss for words.

A real person thought it would be a good idea to write this and post it on the Internet. pic.twitter.com/rj8viJr1HQ

With a recommendation like that, how could I pass it up? And after reading it, I tweeted my astonishment to Susie, who told me, “I write comics, but I don’t know how to react to this in a way that’s funny.” I realized that I couldn’t offer an appropriate reaction in 140 characters either. The more I think about Snow’s essay, the more it looks like the outline for a class on the pitfalls of solving social problems with technology, a class I’m now planning on teaching this coming fall.

Zuckerman wonders “is it possible to get beyond both a naïve belief that the latest technology will solve social problems and a reaction that rubbishes any attempt to offer novel technical solutions as inappropriate, insensitive and misguided?”
link to this extract