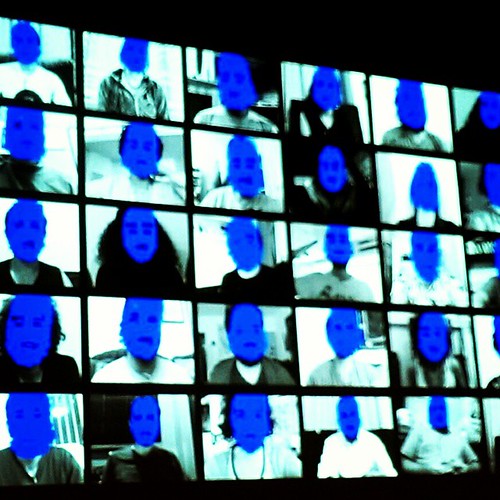 Facial recognition is being used for unsavoury purposes in Russia. (This is an example from Iran, at SXSW.) Photo by TheSeafarer on Flickr.

A selection of 9 links for you. Suits you. I’m charlesarthur on Twitter. Observations and links welcome.

Daphne Keller and Bruce Brown on the “right to be forgotten” [more correctly, “delisted from search”] laws in Europe, which now applies to google.com accessed inside Europe:

»News outlets should have particular cause for alarm about geo-blocking. Journalists rely on global networks to investigate and report on international stories, like the recent Panama Papers revelations. They themselves are often the first targets when governments seek to control the flow of information to their citizens. Protection exists in European Union privacy law for journalistic activities, so the news media is not directly in the cross hairs of the “right to be forgotten.” But American news organizations have faced libel actions in hostile foreign courts — and when plaintiffs start asking for geo-blocking in those cases, journalists will be on the front lines.

Privacy is a real issue, and shouldn’t be ignored in the Internet age. But applying those national laws to the Internet needs to be handled with more nuance and concern. These developments should not be driven only by privacy regulators. State departments, trade and justice ministries and telecom regulators in France and other European countries should be demanding a place at the table. So should free-expression advocates.

One day, international agreements may sort this all out. But we shouldn’t Balkanize the Internet in the meantime. Once we’ve erected barriers online, we might not be able to tear them down.

There’s a wonderful unspoken cultural imperialism about this approach: whatever the prevailing thought in the US is about [topic], well, that should be the approach to [topic] everywhere. Applying US laws to the internet is just as misguided as applying any other national laws. The Panama Papers is a complete red herring in this context.

You might wonder if Keller and Brown are unaware of their imperial approach. Keller, as it happens, used to be a lawyer at Google.
link to this extract

»For a long time, Samsung’s phones have gone head to head with the iPhone, but when it came to having an ecosystem of different devices, Apple was the hands-down winner.

Sure, Samsung had its own tablets and watches, but it was Apple that was able to build loyalty, convincing customers to make purchase after purchase.

With virtual reality, though, Samsung is off to the early lead. Alongside Sunday’s debut of the Galaxy S7 and S7 Edge at the Mobile World Congress 2016 in Barcelona, the company is announcing the Gear 360 — a consumer camera for capturing virtual-reality content. That completes the VR circle, with its Gear VR headset, already the most accessible way to consumer virtual-reality content outside of Google’s ultra-cheap cardboard viewer, which is more for getting a taste of VR than long-term consumption.

The Gear 360 isn’t due out until the second quarter — and Samsung won’t say how much the orb will cost — but it looks small, simple and powerful, at least at first glance.

VR is coming.
link to this extract

»Mikko Hypponen, chief research officer for Finland-based F-Secure, said that infections of critical infrastructure were surprisingly common, but that they were generally not dangerous unless the plant had been targeted specifically.

The most common viruses spread without much awareness of where they are, he said.

As an example, Hypponen said he had recently spoken to a European aircraft maker that said it cleans the cockpits of its planes every week of malware designed for Android phones. The malware spread to the planes only because factory employees were charging their phones with the USB port in the cockpit.

Because the plane runs a different operating system, nothing would befall it. But it would pass the virus on to other devices that plugged into the charger.

Absolutely gobsmacking.
link to this extract

Foreign visitors frequently wonder why crowds of Germans wait for traffic lights to turn green when there are no cars in sight.

That is why officials in the city of Augsburg became concerned when they noticed a new phenomenon: Pedestrians were so busy looking at their smartphones that they were ignoring traffic lights.

The city has attempted to solve that problem by installing new traffic lights embedded in the pavement — so that pedestrians constantly looking down at their phones won’t miss them.

(The headline pretty much covers the whole of the story, but there you go.) Cities being redesigned for our devices.
link to this extract

»By the time Gaab began his investigation in 2012, the Secret Service had linked at least 10 different versions to the same family of fake $50s and $100s. The margins were impressive. The agency estimated that the counterfeiter sold his initial run to his U.S. distributors for 10 percent of their face value. The distributors then dealt their haul to middlemen for 25¢ to 35¢ on the dollar. By the time they reached the person passing the bills at Walmart or Target, a bogus $100 note was being sold for as much as $65.

Another great read from Bloomberg’s team. Bloomberg BW is a print magazine.
link to this extract

»From the start, FindFace has raised privacy concerns. (Even in his glowing recommendation, [software engineer Andrei] Mima addressed fears that the service further erodes people’s freedoms in the age of the Internet.) In early April, a young artist named Egor Tsvetkov highlighted how invasive the technology can be, photographing random passengers on the St. Petersburg subway and matching the pictures to the individuals’ Vkontakte pages, using FindFace. “In theory,” Tsvetkov told RuNet Echo, this service could be used by a serial killer or a collector trying to hunt down a debtor.”

Hoping to raise concerns about the potential misuses of FindFace, Tsvetkov seems to have inspired a particularly nasty effort to identify and harass Russian women who appear in pornography. On April 9, three days after the media reported on Tsvetkov’s art project, users of the Russian imageboard “Dvach” (2chan) launched a campaign to deanonymize actresses who appear in pornography. After identifying these women with FindFace, Dvach users shared archived copies of their Vkontakte pages, and spammed the women’s families and friends with messages informing them about the discovery.

Oh, Russia. But this is how facial recognition systems will be used; this genie just announced its out-of-bottleness.
link to this extract

»Nobody likes ads, but they’re kind of the cost of doing business in a world where we’ve grown accustomed to getting our content for free. Although YouTube has long had ads before videos, Google is pushing out a new ad format called “Bumpers,” which are unskippable 6-second shorts placed in front of videos.

In the Adwords blogpost that announced the format, Product Manager Zach Lupei compares these Bumper ads to video haikus. Current ads placed before videos are often full-length ads that can be skipped after a few seconds. However, these ads have a hard cap of six seconds, making them more like Vine videos than traditional ads. Marketers will have to get pretty clever to squeeze meaningful, worthwhile content into that narrow window of time, so we might actually be getting some creative and hilarious little shorts out of this.

“Creative and hilarious”. And unskippable. (Also, I abhor the “hey, I just happened to be passing a keyboard and I kinda wrote this blogpost of no consequence except it fills our ad quota” style of writing.)
link to this extract

»Vendors shipped a total of 334.9m smartphones worldwide in the first quarter of 2016 (1Q16), up slightly from the 334.3m units in 1Q15, marking the smallest year-over-year growth on record. The minimal growth this quarter is primarily attributed to strong smartphone saturation in developed markets, as well as a year-over-year decline from both Apple and Samsung, the two market leaders.

The biggest change to the market, however, was the addition of lesser-known Chinese brands OPPO and vivo, which pushed out previous fourth and fifth place players Lenovo and Xiaomi, respectively. As the China market matures, the appetite for smartphones has slowed dramatically as the explosion of uptake has passed its peak. In 2013, China’s year-over-year shipment growth was 62.5%; by 2015, it had dropped to 2.5%. Conversely, the average selling price (ASP) for a smartphone in China rose from US$207 in 2013 to US$257 in 2015.

“Along China’s maturing smartphone adoption curve, the companies most aligned with growth are those with products serving increasingly sophisticated consumers. Lenovo benefited with ASPs below US$150 in 2013, and Xiaomi picked up the mantle with ASPs below US$200 in 2014 and 2015. Now Huawei, OPPO, and vivo, which play mainly in the sub-US$250 range, are positioned for a strong 2016,” said Melissa Chau, senior research manager with IDC’s Worldwide Quarterly Mobile Phone Tracker. “These new vendors would be well-advised not to rest on their laurels though, as this dynamic smartphone landscape has shown to even cult brands like Xiaomi that customer loyalty is difficult to consistently maintain.”

Unless you’re quite into the phone business, you’ve probably never heard of OPPO or vivo before. The erosion of ASP is dramatic too. Which of course is a problem for Apple – even if it’s rising in China. Is there new growth left in the business?
link to this extract

»Apple Music has gained 2 million subscribers since February, surpassing 13 million this month, according to the company.

The latest figures put the Spotify rival on course to top 20m by the end of this year if it continues on its current impressive trajectory – adding a million subscribers per month.

Apple Music gained a million subscribers in both January and February this year. Since first arriving on June 30 last year, Apple Music has launched in 113 countries. It’s now available in 58 markets in which Spotify is not – including Russia, China, India and Japan.

Last we heard, from SVP Eddy Cue, the platform’s subscribers went above 11m two months ago.

“We feel really great about the early success of Apple’s first subscription business, and our music revenue has now hit an inflection point after many quarters of decline.”

Many quarters of what’s that now again? I don’t recall Apple mentioning music revenue declines before.
link to this extract