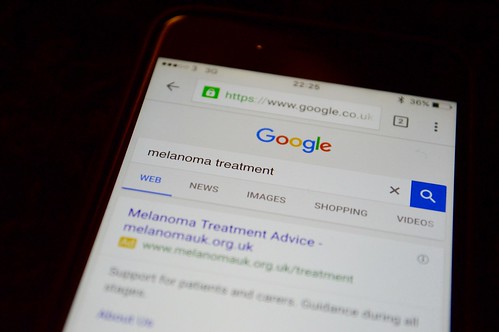 Ooh look, an ad on a mobile search. Photo by patientpowerful on Flickr.

If, on average, people do less than one search per day on mobile, then how is it that Google keeps reporting that mobile search is bringing in more money?

Isn’t that a refutation of what I said last October, when I said that it was a “growing problem” that 50% of people do zero searches per day on mobile?

Wall Street analysts are interested in this question, because they can see which way the wind’s blowing – towards mobile, away from desktop, where searches in developed countries are likely tailing away in total number. (They certainly are in the US.) If mobile is growing, and fewer people do searches, and Google depends on searches.. isn’t that bad?

But Google says everything’s rosy. Until you examine it more closely.

“Our very strong revenue of $20.3bn in Q1… [was] up 23% in constant currency versus last year. The primary driver was the use of Mobile Search by consumers, benefiting from our ongoing efforts to enhance the Mobile Search experience.”

And that’s not all:

“we also benefited from solid growth in desktop and tablet search as well as continued strength in YouTube and programmatic advertising.” Porat also says later (in the Q+A); “mobile search revenue was up considerably”.

So everything’s great. Although Wall St sold off the shares, on the basis that mobile ads weren’t converting well. Huh? Wall St has it wrong, surely?

“our strongest growth areas, namely mobile and programmatic, carry higher TAC [traffic acquisition costs – when you have to pay someone to bring the traffic to you; an example is the default search on Apple’s desktop and mobile Safari. Google pays Apple a fixed amount, and – it’s reckoned – a per-search amount.]

So how is mobile search bringing in more money? Simple: Google has stuffed more ads into view. On mobile search, you now have to scroll the page before you see an organic search result.

This was brought up in the questions. Carlos Kirjner-Neto of Sanford Bernstein asked Sundar Pichai:

“can you talk a bit about the decision you took last year to have an additional ad on Mobile Search response pages relegating organic results below the fold? How is it good for the user experience to have [an] ad instead of organic? And if it is good, what does it say about the potential for innovation in organic search?”

“We are incredibly sensitive to the user experience on Search. And so we are constantly evolving how we display ads, but we take a very long-term view. Our ads quality efforts [sic], these are people who have been working on this for many, many years and they are squarely focused on optimizing for positive metrics across users and advertisers. So our utmost focus is making sure, for users, these changes have a positive impact. And mobile is an entirely different paradigm and so a lot of things are counter-intuitive. So, for example, users are very comfortable swiping on mobile. So we deeply think about these things, and I’m very comfortable about how we are planning this for the very long term.”

“Users are very comfortable swiping on mobile.” Uh-huh. Though notice that it’s the advert that comes above the organic results. Presumably Google and advertisers wouldn’t be happy at people getting the organic results first and having to swipe to find the ads. Another analyst brought this up too. Justin Post, of Bank of America Merrill Lynch, asked:

“can you help us on query growth, just how that’s trending since Mobile really took off? Is it growing? How is it trending? And do you have more room to monetize, given where your ad coverage is now?”

This is a crucial question. What Post is asking is: do people actually do more searching on mobile? And is the number who do searches growing? (They’re precisely the questions I’d ask if I were on the call, so 👏 to Post.) Will Pichai, the search engine’s boss, answer this? No, it’s Ruth Porat stepping up to the mic.

“As Sundar said, [we’re] focused on answers’ there are a lot of new ways to search on mobile, of course, voice, et cetera. So let me try and actually add a little more on your question on cloud.”

(Post had asked a two-part question, part of which was to do with Google’s for-hire cloud business.)

The pattern keeps being repeated. Analysts try to ask questions to winkle some sort of insight into where mobile search is going; Porat and Pichai duck and dive.

“Just on Mobile Search and the mobile ad format changes in 3Q of last year… were those changes made globally last year in 3Q?… And then on the desktop, Ruth [Porat], you mentioned that desktop [revenue] growth picked up in the first quarter. What drove that pickup in growth, and [are there] any learnings from the change in the right-hand rail in the first quarter?”

Here, Nowak is first asking about the ad changes on mobile which added another ad. On the desktop, he’s asking another deeply relevant question. Desktop search is slowing down in developing markets, because people spend less time on desktops, more on smartphones.

So earlier this year, Google changed the layout of its desktop results so that there’s no “right-hand rail” of adverts. Instead, all the adverts are piled at the top of the page, followed by the “OneBox” promoting Google services (such as Maps, YouTube, and News).

For “highly commercial” queries (a definition Google isn’t sharing), you’ll get four rather than three ads on top of the results. And who knows, over time perhaps more and more queries that qualify for ads will be defined as “highly commercial”?

As on mobile, the result is that you now have to scroll some distance to get to organic search results on many queries. (If you think this is somehow new, not at all; in 2013 Danny Sullivan was asking “Are Google’s results getting too ad-heavy and self-promotional?”.)

So what happens? Is it possible that people impatiently click on an ad when they see something that looks like an answer? Nowak might be implying that it’s simply this which has driven up desktop revenue; analysts aren’t stupid.

Pichai confirms that the mobile change was global. But then, instead of the head of the search company handling the question about “learnings” from the change in desktop layout, it goes to the finance person, Porat. Here’s what she told Nowak:

“We had a modest benefit from that change where, just to be clear for all, we reduced the ad load by removing ads on the right-hand side of the screen while adding a fourth ad slot for highly commercial queries in the aggregate. That results in a cleaner, more useful, presentation and improved user experience. It was a modest impact, but additive.”

At this point one has to raise a hand. First, Google wouldn’t have made that change if it meant fewer clicks on ads. But how – how? – can having more ads piled on top of the organic results be an “improved user experience”? If the ads are better for the user than the organic results, then why have organic results at all? (Nowak seems to be hinting at this too. All ads would mean Google would absolutely coin it.) If the change means you have to scroll further to get to unpaid results, how is that better? I really don’t get it.

So what are we left with?
• Google stolidly refuses to tell us what’s happening with trends in search on mobile
• there are more ads above the results on both mobile and desktop than a year ago
• Google is getting more revenue, in total from adverts on both mobile and desktop
• Google insists that the addition of adverts above the results on the desktop results in an “improved user experience”
• happily, this improved user experience also results in improved revenues for Google.

Me – well, I’m still fascinated by where this will end up. Can Google just keep adding ads above the results without end, as Morgan Stanley’s Nowak possibly implied, and keep pumping up the revenues from desktop and mobile? If so, how does that square with Google’s long-ago disdain for search engines which put adverts ahead of organic results?

Just in case you want me to SaveYouAClick, the link text there says:

Since it is very difficult even for experts to evaluate search engines, search engine bias is particularly insidious. A good example was OpenText, which was reported to be selling companies the right to be listed at the top of the search results for particular queries [Marchiori 97].… In general, it could be argued from the consumer point of view that the better the search engine is, the fewer advertisements will be needed for the consumer to find what they want.

Those words are nearly 20 years old. But they’re still true.

2 thoughts on “How is Google’s mobile revenue rising if 50% of people do zero searches per day?”