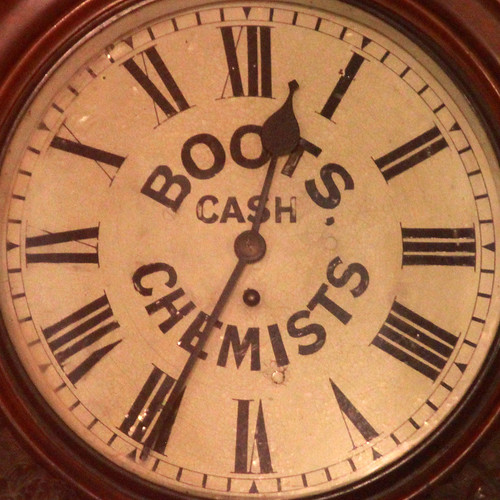 Financial engineering turned Boots into a nightmare for some. Photo by Leo Reynolds on Flickr.

How Boots went rogue » The Guardian

»This is the tale of how one of Britain’s oldest and biggest businesses went rogue – to the point where its own pharmacists claim their working conditions threaten the safety of patients, and experts warn that the management’s pursuit of demanding financial targets poses a risk to public health. (Boots denies this, saying that “offering care for our colleagues, customers and the communities which we serve…is an integral part of our strategy.”)

At the heart of this story is one of the most urgent debates in post-crash Britain: what large companies owe the rest of us – in taxes, in wages, and in standards of behaviour.

This isn’t about technology, but it is about what financial instruments – aided by technology – can do. And it’s a terrific piece of journalism, talking to the people who are the cogs in the machine. Speaking of which…
link to this extract

Why the gig economy is sputtering » Medium

Steven Hill, a senior fellow at the New America Foundation, is also author of “How the ‘Uber economy’ and runaway capitalism are screwing American workers”:

»A pattern has emerged about the “white dwarf” fate of many of these once-luminous sharing startups: after launching with much fanfare and tens of millions of VC capital behind them, vowing to enact a revolution in how people work and how society organizes peer-to-peer economic transactions, in the end many of these companies morphed into the equivalent of old-fashioned temp agencies (and others have simply imploded into black hole nothingness). Market forces have resulted in a convergence of companies on a few services which had been the most used on their platforms. In a real sense, even the startup king itself, Uber, is merely a temp agency, where workers do only one task: drive cars. Rebecca Smith, deputy director of the National Employment Law Project, compares the businesses of the gig economy to old-fashioned labor brokers. Companies like Instacart, Postmates and Uber, she says, talk as if they are different from old-style employers simply because they operate online. “But in fact,” she says, “they are operating just like farm labor contractors, garment jobbers and day labor centers of old.”

Hill’s piece is a must-read, as much as anything because it goes back and finds out what actually happened to all those Techcrunch Disrupt-style companies which attracted so much hoo-ha.
link to this extract

»Capitol Records on Tuesday introduced a new instant chat “buddy” – the first of its kind – designed specifically to respond to questions on the popular rockers. Timed with the launch of the band’s new album, Amnesiac, the Radiohead buddy can chat about the band’s touring dates, up-to-date news, artist bios and album info.

The buddy, named GooglyMinotaur after a character on Amensiac’s artwork, is an exclusive on America Online’s instant messenger service for the next two weeks.

The launch marks one of the first commercial uses of instant messenger, a fast-growing means of communication for families, friends and co-workers. IM networks have long been looking for a way to profit from the millions of people chatting via IM.

Just in case you thought this “bot” stuff was new.
link to this extract

In its fight against fake news, Facebook found a resilient foe » BuzzFeed News

“Overall since we rolled out updates to down-rank hoaxes on Facebook [last year], we have seen a decline in shares on most hoax sites and posts,” a Facebook spokesperson told BuzzFeed News, describing the process by which it assigns items in its feed high or low rankings, which subsequently affects how often they appear.

To gauge Facebook’s progress in its fight, BuzzFeed News examined data across thousands of posts published to the fake news sites’ Facebook pages, and found decidedly mixed results. While average engagements (likes + shares + comments) per post fell from 972.7 in January 2015 to 434.78 in December 2015, they jumped to 827.8 in January 2016 and a whopping 1,304.7 in February.

The fake news sites make their money (in case you wondered) through the ads they show. Do advertisers care that they’re supporting fake news sites?
link to this extract

»BuzzFeed’s doing fine. So is the digital media business. Everything’s going to be great, as long as you understand that everything is changing.

That’s the message from BuzzFeed chairman Ken Lerer, who disputes an industry-rattling report that the company has “slashed” its projections for 2016 after missing last year’s goals.

“Anyone who thinks that this isn’t a terrific time to be in digital content is dead wrong,” Lerer said. “It’s a fantastic time.”

One gets the feeling Kafka doesn’t quite buy Lerer’s line.
link to this extract

The five most infamous software bugs in history » OpenMind

»When coding, a developer has to define variables the program will use and also the size those variables will take in the computer’s memory. The amount of memory required by the variable is expressed in bits.

On June 4th, 1996 and only 30 seconds after the launch, the Ariane 5 rocket began to disintegrate slowly until its final explosion. Simulations with a similiar flight system and the same conditions revealed that in the rocket’s software (which came from Ariane 4), a 64-bit variable with decimals was transformed into a 16-bit variable without decimals.

These variables, taking different sizes in memory, triggered a series of bugs that affected all the on-board computers and hardware, paralyzing the entire ship and triggering its self-destruct sequence.

The other four are pretty good too.
link to this extract

»Tinker with a neural network in your browser. Don’t worry, you can’t break it. We promise.

Created by Daniel Smilkov and Shan Carter. Allow yourself a fair bit of time to understand what is going on here (that is, longer than I gave it).
link to this extract

A farewell to comments » Above the Law

»This summer, Above the Law (“ATL”) will turn ten. The web has changed a great deal in the past decade, and ATL has evolved along with it.

One area where we’ve seen a lot of change: reader comments. In the early days of ATL, especially before the Great Recession, the comments were amazing. A single story could get hundreds of comments, most of them substantive, thoughtful, and related to the subject matter of the story. Yes, the comments could sometimes be edgy or offensive — which is why in January 2009 we tweaked our layout to hide them, requiring the reader to affirmatively click into them – but the value they brought to the table outweighed the offense.

Today the comments are not what they once were. Although occasionally insightful or funny, ATL comments nowadays are generally fewer in number, not very substantive (often just inside jokes among the commentariat), yet still often offensive. They also represent a very small percentage of our total traffic (as we can tell because of the click required to access them)…

…on the whole there is a higher level of seriousness to ATL in 2016 compared to 2006. We work hard to generate content that we’d like to be taken seriously – and we believe that redirecting discussion of our content away from anonymous comments and toward social media is an important step in this direction.

That last is relevant: ATL reckons it is more, not less, serious, but that comments haven’t kept pace – they haven’t even maintained their previous level.
link to this extract

Panama papers: how much of an insider job? » Eerke Boiten’s blog

Boiten is a cybersecurity expert, and spoke to Wired, but here he riffs a bit more:

»Mossack Fonseca itself told customers that it was an attack on their email servers. This is what ended up reported in El Espanol and subsequently The Register, but neither have details (e.g. was it really an attack on the server, or a phishing attack on staff via email?). The best source I’ve found for what happened is an article in Sueddeutsche Zeitung (SDZ). Particularly from the telling line “Mossack Fonseca created a folder for each shell firm” I would say an attack on any emails going in/out of MosFon is unlikely to have been the direct cause of the leak. Those MosFon created folders, nor any predictable or comprehensive amounts of info from them, wouldn’t naturally appear in emails. The SDZ article and other reports contain no indication that the journalists have had to deal with scatty information or incomplete files. So what SDZ got was likely complete folders. Otherwise, the report on processing the files would likely have included a huge sorting step at the start.

My overall line on the bad external security of MosFon would be a general judgement on their security measures, along the lines of “If they didn’t even X, then they certainly wouldn’t have Y” – with many basic security issues X described in the Wired article, and Y things like Data Loss Prevention and other methods of discovery of access anomalies. Or in a double-bluff scenario (and here comes the quoted bit), there might have been an insider who knew enough to stay under the radar of any DLP. I still don’t have a better explanation for the files coming out over a long period – files grabbed from emails would have been incomplete, but the total volume would have fitted a single cheap harddisc, so no reason to do it slowly especially when it was risky. A random hacker accidentally finding the security holes wouldn’t have taken the risks.

»Google Calendar has launched a feature called Goals that uses machine learning to help you figure out when you have time to pencil in stuff like spending time with your family or exercise. The feature is now available for Calendar’s Android and iOS apps.

Goals are set up by clicking into a category (which currently include Exercise, “Build a Skill,” and “Me Time,” though they can also be customized) and selecting a specific activity. Then Calendar will automatically find open slots, fill them in with your goal, and send reminders.

If you schedule something else during those times, Google Calendar will find another window for your goal—but, in a tool that will surely be chronically abused by procrastinators, they can also be deferred. Goal’s machine intelligence, however, will attempt to keep up, finding better time slots for goals until you can no longer avoid it.

*turns to camera, begins walking along corridor speaking aloud* By the second decade of the 21st century, some Americans had persuaded themselves that they were working so hard that they had to get a machine to schedule in “family time” on their electronic calendars.
link to this extract