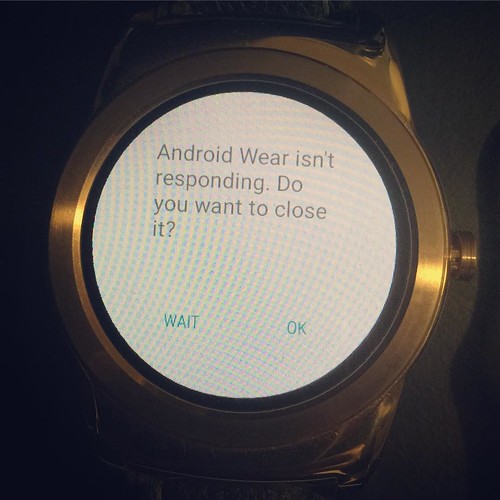 It seems buyers aren’t either. Photo by jonmasters on Flickr.

I’d expected that the Christmas period would see a dramatic rise in that figure; traditionally it’s the time for gifts, even (or especially) for the geek in your life, so I thought that there would be a rapid uptick in the number of Android Wear downloads, each new one of which indicates an activated device.

And yet. The download figure for Android Wear remains stubbornly stuck in the “1m – 5m” band, which it crossed into in mid-February 2015.

Twelve months on, and what has happened in the meantime? Apple launched the Apple Watch, which various estimates reckon shipped 4m units in its first quarter (April-June 2015) alone, and then topped it off with slightly better quarters each time.

And Android Wear? My latest calculation puts the number activated at between 3.35m and 3.45m – see the graph below. (The variation arises from whether you assume that comments proceed strictly in line with downloads, or that people are less likely to comment as time goes on.)

Is that bad? Well, since the start of the year, it has been adding activations at around 40,500 per week. In the four weeks before the New Year, it was 46,000 per week, with one particularly notably peak in a mid-November week of nearly 79,000.

You’d expect that: big rush before Christmas, slowdown afterwards. But at that rate, it’s going to take a long time for the ticker to go past 5 million on Google Play. In my November post, I thought we’d already be there now.

How reasonable is my estimate? We can definitely say that it has taken more than a year to rack up fewer than 4m activations – which makes sense, because to add 4m takes a consistent run rate of nearly 77,000 activations per week. Android Wear appears to be nowhere near that.

According to my calculations, at the present activation rate, it will take until October before total Android Wear activations pass the 5m mark.

Android Wear estimated activations: presently just short of 3.5m, and with a long road ahead

So what’s wrong with Android Wear?

There’s no shortage of Android Wear devices. They were ahead of Apple in introducing the concept of the “smart watch”. They were ahead of Apple in arriving: LG, Motorola, Huawei, pretty much every big Android OEM except Samsung and HTC got in there. Samsung isn’t there because it prefers its own Tizen OS – because that allows the flexibility to do what it wants. HTC backed off the idea, which was smart given the financial problems it has. Google has introduced an app to make them work with iOS. Hasn’t changed things.

If people aren’t buying these devices, there’s a problem in the story around them. “Why would I want a smartwatch? For that price? And look at how BIG it is!” (The latter is a pretty consistent reaction to the giant wheels people are expected to strap on their wrist. Actually, maybe that’s our answer.)

Given the gigantic addressable market for Android Wear – pretty much every Android user, which is a lot of people – it seems like we’re seeing both the “premium effect” (iPhone users tend to spend more) and the “huh? Why?” effect.

Quite possibly smartwatches are going to remain a niche – a sort of technological diversion, a bit like games consoles, which have a devoted and upgrading audience, but aren’t actually that pervasive when you look closely at the numbers (particularly when you note how many buyers of one console then add another).

One thing’s for sure, though – the makers of Android Wear devices need a good selling line, and soon.