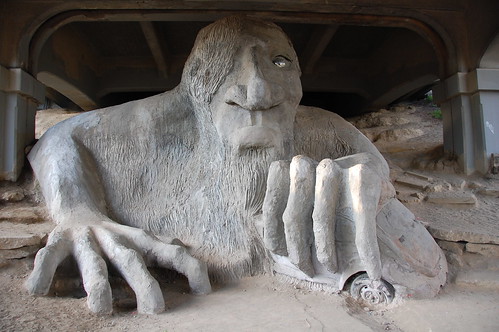 Death to trolls! Except when they’re human. Photo by Roshan Vyas on Flickr.

On February 1, Iowans will cast the first votes of the 2016 presidential election, and the only thing that’s clear is that this Republican primary is the most unpredictable and surreal campaign in recent memory. But why? To understand the swirl of forces buffeting the party, we traveled across New Hampshire and Iowa and spoke to more than 100 Republican-primary voters. We met them in their homes and at town halls, at a motorcycle dealership and an auto-body shop.

My personal favourite of the many entries is this one:

“I don’t think anybody should go hungry — unless they don’t want to work. And I think everybody ought to have health insurance. But I think they ought to work for it and pay for a little of it, too. And we have given a lot of money to charity, because we have been successful, and we’ve tried to give back. But I have one philosophy: Teach a man how to work, don’t give him a fish. Teach a man to fish, don’t give him a fish.”

Uh-huh. By the way, the original phrase was “intestinal fortitude“.
link to this extract

Over five million Google Cardboard viewers have been shipped globally. These come in all shapes and sizes, the NYT Cardboard, the Star Wars Cardboard, Mattel Cardboard etc. Google has effectively invaded the VR scene and given people something to say “wow” about with what is now in many ways an iconic product.

Another milestone is that there have now been more than 25 million downloads of VR compatible apps, and that figure is just from the Google Play store. Google’s first wave of VR has left the company acting as more of an enabler of experiences than a provider of them, we’ll see how that shifts in the future but for the time being it seems it’s being successful at what it has sought to do.

Another interesting stat released is that nearly 350 thousand hours of YouTube content have been watched in Cardboard viewing mode. That’s another number you can expect to see increase; YouTube just hired a former Jaunt exec to act as their “Global Virtual Reality Evangelist.” In a similar vein of content viewing, the company also detailed that nearly 750 thousand VR photos had been taken with the Cardboard Camera.

Pump priming? Cardboard is far and away the most-used VR viewer, and may remain that way for some time to come.
link to this extract

Death of a troll » The Guardian

It had taken Eris two days to create an entire fake news site to host his fake obituary. The suicide note wouldn’t be enough, he realised. What if his friends thought he had just overdosed on pills, and was alive somewhere, half-comatose? Without convincing evidence that he was already dead, they might try to save him. So he made up a name, bought the “Sullivan County Tribune” URL, and seeded it with articles from other news outlets. He took care to mention that his remains would be cremated (no body, no grave), and fudged some of the details about his family (who had no idea of his “death”), and his exact location (he said he had died in a nearby town).

In Epic Mafia, there is a word for the act of scanning someone’s messages for clues as to whether they are mafia: scumreading. Careful inspection of the Sullivan County Tribune website might have revealed that listed among the newspaper’s staff was one Nikita Petrov – a Russian historian acclaimed for his books about the Soviet secret police, who Eris was known to admire. But no one scumread Eris’s suicide note. Or his obituary. His clues were never found.

A long read – give yourself some time – that gives an insight into the strange minds of people who troll relentlessly.
link to this extract

The drugstore chain Walgreens told Theranos to stop sending clinical lab tests to its Newark, California lab today. Walgreens has also decided to immediately suspend Theranos laboratory testing services at its store in Palo Alto, California. The decision, which will affect Theranos Wellness Centers located inside Walgreens, comes a day after a warning letter sent to Theranos was made public by the US Centers for Medicare and Medicaid Services.

“Walgreens informed Theranos that tests collected at 40 Theranos Wellness Centers located at stores in Arizona must be sent only to Theranos’ certified lab in the Phoenix area or to an accredited third-party lab for analysis,” a Walgreens statement explains. “No patient samples will be sent to the Newark lab until all issues raised by CMS have been fully resolved.”

Theranos is in trouble. The trouble is deep. It is going to struggle to get out of it. The fascinating part is how long it had been bobbing along without any public questioning – or scientific examination – of its tests.
link to this extract

The final position of one of the winning games by DeepMind’s AlphaGo against European Go champion Fan Hui. You can replay it; if you don’t understand Go, don’t worry. But it’s a game where an average player (such as me) can’t tell the difference between moves made by the human and by the computer.
link to this extract

Too often when writing about what teenagers like, we neglect to talk to the most important group of all: teens.

So we decided to put together a “State of the Union” on the American teenager. To learn what American teenagers in 2016 really like (and what they don’t), we polled about 60 teens from across the country. We spoke with teens ages 13 to 19, in middle school, high school, and college.

We asked them about their digital lives and habits, the apps they use and the games they play, pop culture, and politics. Their answers offer a glimpse into what it’s like being a teenager in 2016. We’ve drawn out the highlights below — along with some data from other sources — so keep scrolling for our guide to teenagers in 2016.

Small sample, but probably representative. Seems like using Facebook wouldn’t be the way to profile them.
link to this extract

I’d guess that pretty much all of the iPhones were in the premium segment, which gives you an idea of its size. One thing about that “entry-level and premium” stat: if they were more than half, then the “middle segment” must be about half too.
link to this extract

TalkTalk has confirmed that three of its India-based call centre workers have been arrested.
The London-based telecoms provider said that it alerted police after carrying out a data security review.

However, a spokeswoman stressed that it had seen no evidence that the suspects had been involved with a high-profile cyber-breach last October.

Nearly 157,000 of TalkTalk customers’ details, including bank account numbers, were stolen in the breach.

The unnamed suspects do not work for TalkTalk directly but are instead employed by Wipro, a local call centre provider, in Kolkata (Calcutta).

“Following the October 2015 cyber-attack, we have been conducting a forensic review to ensure that all aspects of our security are as robust as possible – including that of our suppliers,” the company said.
“Acting on information supplied by TalkTalk, the local police have arrested three individuals who have breached our policies and the terms of our contract with Wipro. We are also reviewing our relationship with Wipro.”

This always looked like an inside job.
link to this extract

A City of Cardiff Council spokesman, said: “The council has forwarded a written apology to the family and is carrying out an urgent investigation. There were four television screens used to display visual tributes as part of this funeral service.

“The television screen which showed the inappropriate content was recently installed, replacing a screen which was broken. We are trying to establish if the new screen – which is a SMART television – could have accepted or picked up a broadcast by accident via blue tooth or across a WiFi network.

“The other three screens which aren’t SMART TVs were unaffected. We are clear that it isn’t possible for any member of staff to play or download anything on the computer that links to the screens in the chapel. The screen has now been completely disconnected until audio visual engineers carry out a thorough investigation.”

Hmm. Do we trust this to have been down to the smart TV?
link to this extract

The finance police report was due to be delivered to the Internet giant later in the day and comes amid an increasingly angry debate across Europe over taxation of multinationals who park earnings in low-tax nations.

Asked about the Italian report, a Google spokesperson said: “Google complies with the tax laws in every country where we operate. We are continuing to work with the relevant authorities.”

Google’s latest figures show it paid €2.2m of tax in Italy in 2014 on revenues of €54.4m generated in the country. Italy’s Communications Authority estimates Google’s Italian revenues at around 10 times higher.

“Evaded” is pretty strong: that’s used for knowingly misrepresenting your tax affairs. Normally what Google et al do is described as “avoidance”. Note though how this row is not going away, but only intensifying. (Possibly it’s seasonal.) Apple also made a back payment recently in Italy.
link to this extract