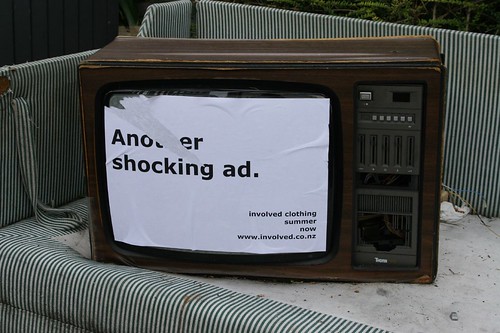 Guess how much this ad cost. OK, if it were actually inside the TV. Photo by wonderferret on Flickr.

“I’ve been intrigued. And I do wear mine, but I don’t wear it every day. I foresee a bright future for it. But I just don’t think I was ever squarely in the market for it. It’s just not the sort of thing that speaks to me.”

[Here Guy English jokes about Gruber’s lack of interest in fitness — fitness tracking being one of the device’s key selling points.]

“Yeah. Right. Once I stopped wearing it every day… there is this weird motivating thing where you want to keep filling these circles everyday. And you get this streak going and you keep going. And I’m sure people are more fit. But then once you stop wearing it every day you definitely by definition have days where you didn’t fill all the circles. [It] just ruins it. It means you don’t care anymore. I don’t know. It just doesn’t excite me that much.”

Personally, still wearing mine each day; does so many things I need (such as, on Thursday evening while driving, starting navigation home via Siri because my normal route was blocked. Would have been tough and distracting with the phone).
link to this extract

The deal, effective “in the coming weeks,” Google said, follows the company’s $20,000 contest that tasked developers with creating “unique augmented reality (AR) experiences” for Tango devices. The winning submissions require a Project Tango device to work, but you can get a taste of the ideas here (and here).

Google told us it doesn’t have a set duration for the discount, but the company apparently has “a limited, but sizable number of promotional codes. We haven’t finalized the exact number yet,” a spokesperson told us…

…Project Tango’s future remains unclear: Google originally aimed to launch a “consumer-scale” Project Tango device with LG in 2015. Then in January, the company spun Tango out of its Advanced Technology and Projects group without sharing much information on the initiative’s next steps.

When asked if the discount was designed to get rid of developer units ahead of a new release, a spokesperson replied, “This is very much to get kits in the hands of developers and shore up the ecosystem. We still don’t have a timetable on consumer-ready units.”

Suggested headline tweak: “Google is halving the cost of…”
link to this extract

Can I annoy you for a penny a minute? » Medium

US TV advertising revenue is expected to reach $78.8bn this year. The average person over 2 years of age in the United States still watches an amazing 29 hours and 47 minutes of TV per week. Which means, when you work it out, that’s just $0.18 in ad revenue per hour of TV watched.

TV Networks are even speeding up their programming in order to fit in more ads as prices fall and viewership dwindles. The average hour of cable television now has 15.8 minutes of ads compared with 14.5 minutes five years ago. The Wall Street Journal reported that “TBS used compression technology to speed up [movies and TV shows]”  —  this video on YouTube shows an example of this tactic with a Seinfeld rerun. For reruns and movies especially, cable networks have long rolled credits very quickly or cut TV opening sequences out entirely.

I find Leathern a must-follow: he has so much inside knowledge of the online ad business, both good and bad. Meanwhile, I find TV in the US unwatchable because of the volume (in both senses) of ads.
link to this extract

Hancock is an MP and the Paymaster General (a role within the Treasury):

One local authority is using this [LIDAR] data to make the case for new flood defences. Council staff 3D printed the local area and fashioned blocks to show where the flood defences might go. Then they poured water on the model, to show local residents exactly which areas would flood, depending on where they put the defences.

Nor is it just local engagement. Precision farming, archaeological digs, urban planning, even uploading England to the game Minecraft: these are just some of the applications we’ve heard about since the data was published.

Let’s take another example. Two years ago Land Registry released the Price Paid Dataset (PPD), tracking residential property sales in England and Wales. The PPD is used by sites like RightMove and Zoopla to bring up-to-date sales data to an audience of millions.

Now we’re enriching it. As of last week, this dataset will also include sales through repossession, those purchased by companies and by-to-lets. It will also allow users to see the sales of non-residential property for the first time.

And the point is this. No minister, even armed with the best policy advice, could possibly conceive of all the things that government data can do.

The only way to find out is to open it up.

Great to see a Treasury minister advocating free government data – which is exactly what the Free Our Data campaign was about, almost ten years ago. Less heartening to see Hancock not pushing for the same from the Freedom of Information Commission.
link to this extract

Natalie Silvanovich, of Google’s Project Zero team, which tries to find bugs in all sorts of software, on a sustained effort to see what weaknesses Samsung’s TouchWiz and other customisations brought to Android:

A week of investigation showed that there are a number of weak points in the Samsung Galaxy S6 Edge. Over the course of a week, we found a total of 11 issues with a serious security impact. Several issues were found in device drivers and image processing, and there were also some logic issues in the device that were high impact and easy-to-exploit.

So only a few hundred other devices to work through then. How different are the other Samsung devices? And then there’s the LG, Sony, and everyone else..
link to this extract

Most are starting before they are even a year old — and by age 3, they’re using the devices all by themselves, the team reports in the journal Pediatrics.

The survey was done in a single urban pediatric clinic in Philadelphia, and the researchers note that the findings do not necessarily extend to the whole country.

But they paint a troubling picture of populations of low-income and minority babies, and toddlers being kept quiet with televisions or tablet devices streaming cartoons.

I’m much more worried about the idea of sitting the children in front of US TV, which spews up to 20 minutes of ads per hour at them, than of them using tablets – where at least they might have some agency. (Could we wish for better software for kids though?)
link to this extract

GT Advanced Technologies Inc. has reached an accord with Apple that will get it out from under $439m in debt it picked up in a failed effort to qualify as a supplier of smartphone-screen material.

The settlement provides for an auction by Nov. 23 of equipment that GT provided in the effort, the proceeds of which will be divided, GT said in papers filed on Monday in the U.S. Bankruptcy Court in New Hampshire. While GT intends to hang on to some of the equipment—as many as 600 sapphire-making furnaces—it is prepared to auction what it can and abandon what it can’t cart off, court papers say.

Anything not sold will be handed over to Apple, which has agreed to scrap the equipment and extinguish the loan it made to transform GT from an equipment manufacturer into a supplier of smartphone-screen material.

End to a long saga. I wrote about it a year ago.
link to this extract

The No.1 mistake people I interview [for jobs] are making these days » Business Insider

Lately, the majority of people I interview have one thing in common.

They’re all messing up on something that I think is very important when trying to get a job: the Thank You Email.

Did not know this was A Thing.
link to this extract

FBI official: It’s America’s choice whether we want to be spied on » Ars Technica

In some cases, a company will tell law enforcement that it can only provide metadata or a “snapshot of the account once a day” instead of the real-time surveillance authorities want, he said.

The FBI has an easier time getting data from companies whose business models depend on viewing customer data, he said.

Some companies “want to monetize the analysis of communications of their customers, for example those companies that actually look at e-mail and analyze it and send you targeted ads,” Baker said.

Baker didn’t mention any specific companies, but this is a practice in place at Google.

“None of that is encrypted, so we can go there and get the order and have the order be effective, and that’s good,” Baker said.

Well, good-ish. (Thanks @papanic for the link.)
link to this extract

Errata, corrigenda and ai no corrida: After yesterday’s item on GPS errors compared to a marathon: they measure marathons (PDF) using “a calibrated bicycle fitted with a Jones counter” which is “the only approved method of measuring road race courses” (which includes marathons).