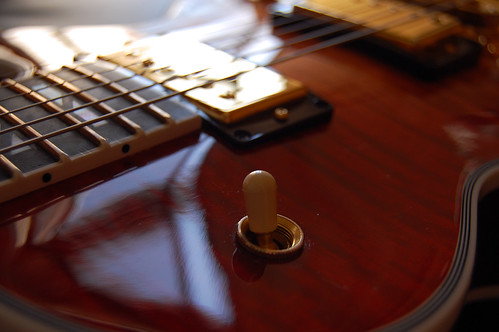 No longer the kids’ dream? Photo by LesPaulSupreme on Flickr.

Citigroup’s Jim Suva this afternoon cut his estimates for the personal computer market to a decline of 10% in unit shipments versus his prior forecast for a 7% drop, while noting that there’s a nascent PC recovery that could help.

Suva, however, reiterates his Buy ratings on Hewlett-Packard (HPQ) and Lenovo Group (0992HK), endorsing the former because of its pending split, and the latter because of it’s restructuring effort. “We expect Lenovo and HP to continue to gain share from other PC companies,” writes Suva.

Suva, citing “finalized” PC data from Q2, after all vendor data has been gathered, now models the industry having sold 27.9m desktops last quarter and 37.5m notebook computers, down from his prior projections of 28.7m and 39.7m, respectively.

He notes the 10% drop he’s looking for is worse than research firm IDC’s projected 9% decline.

Smartphone sales growth is slowing too. Is this indicative of something broader? Also: smaller players in the PC market are going to get squeezed out.
link to this extract

The Environmental Protection Agency said Friday that Volkswagen intentionally skirted clean air laws by using a piece of software that enabled about 500,000 of its diesel cars to emit fewer smog-causing pollutants during testing than in real-world driving conditions.

The agency ordered VW to fix the cars at its own expense. The German automaker also faces billions of dollars in fines, although exact amounts were not determined.

The cars, all built in the last seven years, include the VW Jetta, Beetle, Golf and Passat models, as well as the Audi A3. The vehicles all contain a device programmed to detect when they are undergoing official emissions testing, the EPA said. The cars only turn on full emissions control systems during that testing. The controls are turned off during normal driving situations, the EPA said, allowing the cars to emit more than the legal limit of pollutants.

The internet of intentionally sneaky things.
link to this extract

After two days, in which his adblocking app Peace (which used Ghostery’s blocklist) had been top of the App Store, Marco Arment pulled it:

I still believe that ad blockers are necessary today, and I still think Ghostery is the best one, but I’ve learned over the last few crazy days that I don’t feel good making one and being the arbiter of what’s blocked.

Ad-blocking is a kind of war — a first-world, low-stakes, both-sides-are-fortunate-to-have-this-kind-of-problem war, but a war nonetheless, with damage hitting both sides. I see war in the Tao Te Ching sense: it should be avoided when possible; when that isn’t possible, war should be entered solemnly, not celebrated.

Even though I’m “winning”, I’ve enjoyed none of it. That’s why I’m withdrawing from the market.

His key problem, I think, was that it blocked the Deck ads on his own site, which he’d approved, and he couldn’t reasonably allow an exception for just that. I’m sure he’ll continue using one, though. (He just installed Ghostery on his wife’s desktop.)
link to this extract

iPhone launch weekends are getting silly » Above Avalon

Neil Cybart on Apple’s reluctance this year to offer a figure for how many iPhones were sold in pre-orders:

Critics will say Apple stopped releasing sales because of weaker sales growth. While iPhone sales growth may very well slow, I rather look at it as Apple is now a much bigger company in a different landscape. The Android/iOS activation wars are over. There are other ways to convince the world that iPhones are popular and worth buying besides releasing opening weekend sales. In addition, opening weekend numbers aren’t even a good measure of iPhone growth. If we compare the change in opening weekend sales to the corresponding iPhone growth over the following FY year:

As has previously been noted, there’s no WebKit (ie no way to have an app that’s just a “web wrapper”). Makes sense – have you ever seen a decent web browser interface on a TV?

“If you think about it, the compromised websites are just means for the criminals to get access to as many endpoint desktops as they can,” [Daniel] Cid [of security firm Sucuri] wrote. “What’s the easiest way to reach out to endpoints? Websites, of course.”

On Thursday, Sucuri detected thousands of compromised sites, 95 percent of which are running on WordPress. Company researchers have not yet determined how the sites are being hacked, but they suspect it involves vulnerabilities in WordPress plugins. Already, 17 percent of the hacked sites have been blacklisted by a Google service that warns users before they visit booby-trapped properties. Interestingly, Cid added, the attackers have managed to compromise security provider Coverity and are using it as part of the malicious redirection mechanism.

Checked this site with Sucuri. It’s fine.
link to this extract

At the Future Music Forum, Frukt’s Jack Horner observed that because most music genres, and indeed media as a whole, are becoming age agnostic, which means that it is really hard for Generation Edge to find music that they can own, that their mum and dad aren’t going to sing along to too. This is the price to be paid for media and brands having successfully convinced aging 30 and 40 somethings that they are still young at heart and in the pocket.  So with no music subculture to cling to Generation Edge has instead gravitated to YouTube stars.

For those not familiar with this wave of YouTubers, it is nothing short of an entire new culture in which the platform, medium, format and talent blends into a single entity. Where the term ‘YouTube’ represents to each one of those aspects.  The type of content created is as diverse as fashion vloggers, slow motion film makers, online gamers, pranksters and comedy.  The unifying factor is that these creators are young and have build personality brands and audiences that not only owe nothing whatsoever to traditional media, but that often far surpass that of traditional TV film and music audiences.

It ain’t about having a Gibson without a case any more.
link to this extract

ADNAUSEAM – Clicking Ads So You Don’t Have To

As online advertising is becoming more automatic, universal and unsanctioned, AdNauseam works to complete the cycle by automating all ad-clicks universally and blindly on behalf of the target audience. Working in coordination with your ad blocker, AdNauseam quietly clicks every blocked ad, registering a visit on the ad networks databases. As the data gathered shows an omnivorous click-stream, user profiling, targeting and surveillance becomes futile.

Nice idea; presently only a browser extension in Firefox. Not yet in Chrome or Safari, or of course on mobile. (How would it work?)
link to this extract

Last month, the Guardian disclosed that Apple had looked into booking a secure car testing site in California to road-test its vehicle, codenamed Project Titan. Maletic wrote the mutual confidentiality agreement signed by GoMentum Station, a disused military base near San Francisco with miles of empty streets for driverless cars, when Apple inquired about testing there in May.

The department would not comment on what was discussed at the August meeting, beyond saying that “the Apple meeting was to review [the] DMV’s autonomous vehicle regulations.”…

…If Apple does seek a testing permit for its Project Titan self-driving car, it will have to sacrifice much of its legendary preference for secrecy. Manufacturers applying for a permit have to detail the make, model and vehicle identification number (VIN) of cars they want to test, share details of autonomous features and capabilities, and identify test drivers by name.

They will also have to explain how these safety drivers will be trained to cope with any malfunctions of the car. Manufacturers need to report every “disengagement” where the car unexpectedly hands control back to the driver, as well as all accidents it is involved in.

So the cat’s out of the bag: definitely a self-driving (or at least, autonomous) car. Harris has done great work on this story and on Google’s efforts in the field.
link to this extract

Ben Williams, a spokesperson for Eyeo, confirmed the practice in an email saying that the company did offer people who develop iOS ad-blocking software “compensation for their work in implementing Acceptable Ads.”

Apple’s latest operating system, iOS 9, makes it possible to block ads through third-party apps, such as Peace (which uses technology from Ghostery) or Crystal. If you download these apps, they strip the ads out of any webpage you look at on your iPhone. That usually makes browsing the web faster. It blocks advertising trackers, and it means that less of your data plan is spent downloading ads you don’t want.

This has led to a surge in development of ad blockers for iOS. While Adblock Plus is the largest, its dominance is limited to desktop. An increase in use from other developers on iOS could reduce its position, especially if the Adblock Plus Browser doesn’t take off.

Adblock Plus currently charges companies, including Google, Microsoft, and Amazon, “30% of the additional ad revenues” they would’ve generated through unblocked ads. Presumably, if the company’s dominance in that market is eroded by a large number of competing, smaller apps then big internet advertisers are less likely to pay ABP to let its ads through.

Doesn’t seem to be a lot though – low four-figure sums.
link to this extract

A US appeals court on Thursday said Apple should have been awarded an injunction barring Samsung from selling products that infringe its patents, handing Apple another victory in its ongoing smartphone fight with its biggest rival.

The US Court of Appeals for the Federal Circuit in Washington, D.C. said the lower court abused its discretion when it denied Apple Inc an injunction after a jury ordered Samsung Electronics Co Ltd to pay $120m in May, 2014 for infringing three of Apple’s patents.

The 2-1 appeals court ruling said that Apple’s proposed injunction is narrow because it does not want to ban Samsung’s devices from the marketplace, and that Samsung can remove the patented features without recalling its products.

“Apple does not seek to enjoin the sale of lifesaving drugs, but to prevent Samsung from profiting from the unauthorized use of infringing features in its cellphones and tablets,” the court said.

The case was sent back to a federal district court in San Jose, California, to reconsider the injunction.

Does Samsung even still sell the phones that were the subject of this? And this isn’t an injunction – the lower court now has to “reconsider” its lack of an injunction. Entire species have evolved and died out in the time this case has been going back and forth.
link to this extract

Google expanding Android One to Europe, starting with Portugal and Spain » Android Police

Android One phones have typically been targeted at developing markets, so far launching in Asia, the Middle East, and recently Africa as well. However, yesterday Google Spain announced the Aquaris A4.5, — a phone made by Spanish manufacturer bq — thereby expanding Android One into the European market for the first time.

The Aquaris A4.5 has many of the features and specifications common to other Android One phones: a MediaTek quad-core CPU, dual SIM support, and a MicroSD slot. It also includes a 3-month subscription to Google Play Music All Access and an impressive 5-year guarantee. Unfortunately, those five years do not cover software upgrades, with Google and bq nonetheless promising 24 months of those.