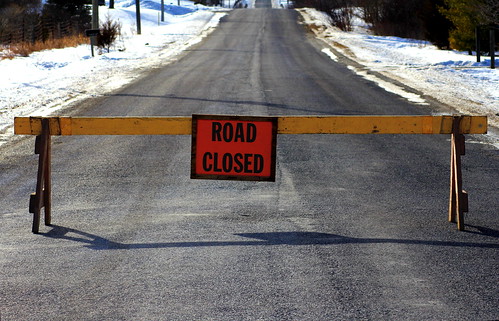 A selection of 10 links for you. Wash at 40 degrees. I’m charlesarthur on Twitter. Observations and links welcome.

Should police have the right to take control of self-driving cars? » Techdirt

“The police officer directing traffic in the intersection could see the car barreling toward him and the occupant looking down at his smartphone. Officer Rodriguez gestured for the car to stop, and the self-driving vehicle rolled to a halt behind the crosswalk.

Commissioned by the National Institute of Justice, the RAND report is filled with benign theoreticals like this, and while it briefly discusses some of the obvious problems created by giving law enforcement (and by proxy intelligence agencies) this type of power over vehicle systems and data, it doesn’t offer many solutions.

That’s quite a question. Then again, would you try to make a getaway in an SDC?
link to this extract

Eric Schmidt – you know, the Google guy – wrote a piece for the BBC’s machine learning week. Most of it is blah. Then there’s this bit:

In the next generation of software, machine learning won’t just be an add-on that improves performance a few percentage points; it will really replace traditional approaches.

To give just one example: a decade ago, to launch a digital music service, you probably would have enlisted a handful of elite tastemakers to pick the hottest new music.

Today, you’re much better off building a smart system that can learn from the real world – what actual listeners are most likely to like next – and help you predict who and where the next Adele might be.

As a bonus, it’s a much less elitist taste-making process – much more democratic – allowing everyone to discover the next big star through our own collective tastes and not through the individual preferences of a select few.

This is being taken as a dig at Apple Music with its human-curated lists. Well, sure, but the “radio” function in Apple Music isn’t human-curated. And music choice “democratic”? Isn’t that how it already works?
link to this extract

iOS dev: why Apple TV is game over for Xbox One and PS4 » Forbes

It’s hard to imagine an immediate threat to Microsoft MSFT -0.93% Xbox One and Sony PS4 running games like Halo and Uncharted. But I talked to Jeff Smith, CEO of the popular Karaoke app Smule , and a developer who’s been with the iOS platform since the beginning. He says that Xbox One and PS4 fans shouldn’t be too quick to dismiss the Apple TV as a serious gaming contender. The key, he says, is that Apple is a developer-friendly platform, and that means more content, and, as iOS has shown, more quality content as well.

“We think it’s significant if you consider the console market today: it’s been a market where there have been high barriers of entry to get into that market,” Smith says. “You have to get Sony and Microsoft or Nintendo to get you on to the platform, you have to have a custom deal, and they’re all proprietary platforms. With Apple bringing tvOS, which is a subset of iOS, onto a console-like platform, we think it lowers the barrier of entry. And I think you’ll see a lot more developers on the console market than ever before.”

Suitably overdone headline, but it’s certainly a mistake to dismiss the Apple TV out of hand. It has an install base of 25m, which isn’t much (the PS3 and Xbox 360 are at about 70m, the PS4 and Xbox One rather less so far), but the next version will attract a lot more people. And you don’t need to pay to put a game on iOS.
link to this extract

Tracking a Bluetooth skimmer gang in Mexico » Krebs on Security

“–Sept. 9, 12:30 p.m. CT, Yucatan Peninsula, Mexico: Halfway down the southbound four-lane highway from Cancun to the ancient ruins in Tulum, traffic inexplicably slowed to a halt. There was some sort of checkpoint ahead by the Mexican Federal Police. I began to wonder whether it was a good idea to have brought along the ATM skimmer instead of leaving it in the hotel safe. If the cops searched my stuff, how could I explain having ultra-sophisticated Bluetooth ATM skimmer components in my backpack?”

The above paragraph is an excerpt that I pulled from the body of Part II in this series of articles and video essays stemming from a recent four-day trip to Mexico. During that trip, I found at least 19 different ATMs that all apparently had been hacked from the inside and retrofitted with tiny, sophisticated devices that store and transmit stolen card data and PINs wirelessly.

In June 2015, I heard from a source at an ATM firm who wanted advice and help in reaching out to the right people about what he described as an ongoing ATM fraud campaign of unprecedented sophistication, organization and breadth. Given my focus on ATM skimming technology and innovations, I was immediately interested.

Krebs gets up to some amazing jaunts.
link to this extract

Google has been found guilty in a rapid Russian antitrust probe, a spokesperson for the country’s antitrust regulator told The Wall Street Journal.

In February, Russia’s Federal Antimonopoly Service opened a probe into Google for alleged anticompetitive practices related to how the company bundles apps with its Android mobile operating system.

The company was found guilty of “abusing its dominant market position,” but not of “unfair competition practices,” the regulator told The Wall Street Journal.

The Russian agency will have 10 business days to issue its ruling on the case in full. “We haven’t yet received the ruling,“ Google’s Russia spokeswoman said. “When we do, we will study it and determine our next steps.”

Form an orderly queue behind the EC, Canada and the rest, please, Russia. Also, how do you have dominance abuse but not unfair competition?
link to this extract

Cyanogen has not announced any partnerships with hardware manufacturers beyond what is already on the market, but to really reach the masses, it will have to partner with a well-known name – and for companies like Sony, HTC and LG, all struggling to make Android work, Cyanogen could be an enticing option.

Of course, with Microsoft’s Lumia range failing to capture any significant market share since the company bought Nokia’s mobile phone division, it, too, could be on the lookout for something new.

While McMaster tells it like it is about Microsoft’s smartphone woes, he says Microsoft is still a great company and builds great services, one of which is going to be key in building the next version of Cyanogen – and that is Cortana.

Microsoft’s digital personal assistant has grown significantly since it began life on the company’s smartphones and this summer had its biggest update to date when it was deeply integrated into Windows 10 and Microsoft’s Edge browser.

McMaster revealed that Cyanogen is working with Microsoft to deeply integrate Cortana into the next version of Cyanogen OS. This is key to catapulting Cyanogen into the mass market, he asserts: Cortana is currently available as an app on Android, but in order for it to make a real difference, it needs to be able to be integrated at the OS level so that its full potential can be leveraged.

So how would that work in a phone running Google services? Wouldn’t Cortana and ‘OK Google’ fight like cats in a sack?
link to this extract

The focus of investors is squarely on the number of phones that can be sold over the next three and a half months. Our estimate is that it can sell 80 million units in the December quarter versus a consensus view that expects little to no growth this year. We believe 3D touch is a much bigger deal that many think and wrote about that and our hands-on experience with all of Apple’s new products. (Link). Of course the bigger issue is that 70% of existing iPhone users are carrying 5s or older models, of which the 6 and 6S models are big upgrades. As we have discussed in the past, the lower hurdles to upgrade those phones in the United States could be a key driver of sales.

Last year at this time Apple shipped 74.5m phones; only Samsung has previously shipped 80m or more smartphones in a quarter (which it’s done four times).

ahead of iOS 9’s release, a number of companies and indie developers have been building content blockers of their own and testing them out with iOS 9’s sizable group of beta testers.

While many consumers will likely gravitate toward AdBlock Plus because of their familiarity with the brand’s name and reputation, there will be a good handful of new apps on the horizon as well, which are also worth a look.

As she says, you can choose from super-twiddly, a bit twiddly, and simple. I’d bet that simple will actually be the one people pick.

Meanwhile…
link to this extract

Although publishers like CNN, Time, and Vox are making most of their content available in the app, some are said to be planning to offer a few dozen stories a day at most. Standouts in that sense include companies that depend on paid subscription models, such as the New York Times and Wall Street Journal.

Some ad executives have complained that common tools like real-time placement bidding aren’t in place for the News launch, and that Apple is requiring 48 hours notice before approving a campaign. The company is also allegedly demanding that pre-roll ads before video segments get their own approval.

Apple is moreover refusing to support Google’s DoubleClick ad platform. Edward Kim, a member of the online marketing company SimpleReach, argued to the Post that Apple is attempting to use News to build up iAd. That platform has struggled to gain ground in a market dominated by Google — whereas Google ads can reach virtually any device, iAd is unusable in some key spaces, like Android.

“Real-time placement bidding” is what quickly leads to malware and “bounce you out to App Store install” ads.
link to this extract

Mark Harris (who has done so much great original reporting on this topic):

[Sarah] Hunter [head of Google X] also shared new details about how the existing driverless prototypes work. “All [the car] has is a ‘go’ button, a ‘please slow down and stop’ button and a ‘stop pretty quickly’ button,” she said. “The intention is that the passenger gets in the vehicle, says into microphone, take me to Safeway, and the car does the entire journey.”

Google’s self-driving cars currently require highly detailed maps of the areas they’re operating in, with centimetre accuracy of road features like lanes, roundabouts and traffic lights. They are also limited to 25mph so that Google could get them on to public roads without expensive and time-consuming crash tests. Even more importantly, they need safety drivers able to take control back in an instant if the system malfunctions. California is slowly working on regulations that will pave the way for the operation of completely driverless vehicles by the public.

All of this means that Google is unlikely to move its self-driving technology into full production any time soon. “We haven’t decided yet how we’re going to bring this to market,” admitted Hunter. “Right now, our engineers are trying to figure out … how to make a car genuinely drive itself. Once we figure that out, we’ll figure out how to bring it to market and in which way. Is it something that we manufacture at scale for sale to individuals? Or is it something that we own and operate as a service?”

Is it a taxi, a bus or an owned device? Seems trivial; actually gets to the heart of what a “car” is.
link to this extract