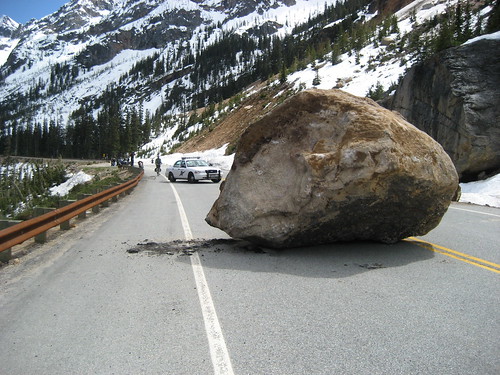 Content blockers for iOS are having their first tests: how do they do? Photo by WSDOT on Flikr.

Passengers moving through JFK Airport’s Terminal 4 are now presented with estimated processing times on 13 new screens. The large and prominent screens are placed at TSA Security and Customs and Border Protection checkpoints, as well as the indoor taxi queue.

“It continuously updates,” says Daryl Jameson, vice president at the company JFKIAT, which runs Terminal 4. People like to know how long they are going to wait in queues. Nobody likes to wait in lines and signage helps to manage expectations.”

The wait times are driven by sensors that monitor passenger’s mobile devices as they move through the airport. The BlipTrack solution, invented by Denmark-based BLIP Systems, and installed by Lockheed Martin, detects Wi-Fi or Bluetooth devices in “discoverable” mode, found in mobile phones and tablets. When a device passes the sensors, its non-personal unique ID—called a MAC address—is recorded, encrypted and time-stamped. By re-identifying the device from multiple sensors, the travel times, dwell times and movement patterns become available.

Neat idea, though when you’re waiting in an inescapable queue, you don’t actually want to know your wait time; you want a distraction. This is why lift designers put mirrors and TVs showing news in lobbies where people wait for lifts: so you can do something else while you wait. Doesn’t speed up the lift; does reduce the subjective queuing time.
link to this extract

I had this forwarded to me earlier today and frankly, I couldn’t believe it. I mean I knew Trustify were making email addresses publicly searchable and somehow not falling foul of DMCA takedowns whilst others doing the same thing were (possibly because Trustify has more lawyers than employees), but I had no idea they’d actually harvest addresses and then send unsolicited emails, so I Googled a bit and found a very unsympathetic Reddit thread on it. There’s a series of responses from thejournalizer (reportedly the content marketing director at Trustify) which provide such enlightening insights as:

The email OP received was actually established to help you and warn you that someone is seeking out details about you.

Ah, it’s there to help you! So after you search on the site and it says “You’ve been compromised” and provides a handy form to sign up to their commercial services, an email is also sent to you because, well, it might not be you.

Isn’t capitalism great, especially where data breaches are concerned.
link to this extract

The world’s smartphone manufacturing giants are losing their luster, leading to a steady stream of job cuts inside previously prestigious mobile units.

The most recent high-profile cuts occurred last week, when HTC and Lenovo each reported less than stellar earnings reports. HTC, after reporting a loss that exceeded analyst estimates five-fold (and caused its market valuation to fall below its cash assets), told investors it would cut fifteen percent of its workforce, amounting to over 2,000 jobs.

Lenovo, meanwhile, announced that it would reduce its workforce by 3,200 people, and cut its non-manufacturing headcount by 10%. The company didn’t specify which specific jobs were at risk, but it pointed to flagging global PC sales, along with the need to streamline its mobile phone unit, as its key goals for the coming year. The company’s net profits were down 51% year-on-year, and its Motorola handset division saw shipments plummet 31% to 5.9 million units.

You can argue about whether Microsoft, the source of half those 15,000 job losses, counts as a “smartphone giant” – shifted more units than Motorola, Sony or HTC – but when Lenovo (now owning Motorola) is cutting, that’s something.
link to this extract

US watch sales fell the most in seven years in June, one of the first signs Apple’s watch is eroding demand for traditional timepieces.

Retailers sold $375m of watches during the month, 11 percent less than in June 2014, according to data from NPD Group. The 14% decline in unit sales was the largest since 2008, according to Fred Levin, head of the market researcher’s luxury division.

“The Apple Watch is going to gain a significant amount of penetration,” he said Thursday in a phone interview. “The first couple of years will be difficult for watches in fashion categories.”
The market for watches that cost less than $1,000 is most at risk, as consumers in that price range have indicated they’re the most likely to buy an Apple Watch, Levin said.

Well, it’s a data point.
link to this extract

For this experiment, I have picked 10 pages from different news websites – Some I use regularly, some I don’t. The metrics I’m monitoring is page size (in MB) and load time (in Seconds). 10 pages is far from a good sample size for the web, I know, but the web is a big place, and my time to benchmark is limited.

Method: All sites tested on an iPhone 6+, connected to wifi (154Mb Fiber). All metrics are taken from Safari Web Inspector after doing an Ignored Cache Reload (CMD+Shift+R).

On average, pages loaded 74% faster with Crystal and used 53% less bandwidth. Just by having Crystal installed, I saved a total of 70 seconds and 35MB of data on these 10 pages.

These are dramatic differences. (Click through for the graphs.) I’m beta testing Crystal myself; it makes the mobile web very attractive, all of a sudden. Though perhaps sites don’t feel the same way.
link to this extract

[Sundar] Pichai [who now heads Google] is known as an executive who seeks consensus rather than conflict. A former Googler who worked on Now recalled Pichai’s response to their protests [when Google Now was shifted from the Android division to the search division – seen as the “boring” area, and not the right fit for a mobile OS framework]: “‘Look, I’ve got a lot on my plate. Chrome and Android are my top priorities. Google Now is not on that. I can’t fight that battle for you.’”

Now has its own battles in store. It has a solid user base, more than a hundred million monthly ones, according to multiple sources. (Google declined to comment on these numbers.) Yet it’s unclear how active those users are, and only a slim slice of them are on the iOS app.

Apple, for its part, looks prepared to launch a competitor to Now on Tap. With its proactive assistant and spotlight search, the Apple entry could elbow Google out. Several people said it was unusual for Google to pre-announce a feature like Now on Tap before it is ready. That hurriedness may have been to pre-empt Apple’s announcement the following month.

And now Bing, which powers search on Apple devices, has its own Now on Tap foil.

iOS 9, with Proactive, will make Google Now largely pointless for the vast majority of iOS users; Google Now will be fine for Android users. Microsoft might pick up a few diehards, but it’s hard to see it really making an impact.

Google, meanwhile, is discovering internal politics in a big way. And that’s before Alphabet.
link to this extract

I’ve been using Android – Google’s mobile OS – it since before it was launched. I now love and loathe it in equal measure.

Consider the simple act of sharing a piece of content. A fairly common activity which the OS should be able to handle in a standard manner. Yet Google’s own apps each have a radically different way of completing this basic task.

Let’s take a look at the latest versions of Play, Maps, YouTube, Chrome, Google+, and Docs – all running on Lollipop.

• Google Play, has the normal Share Icon.
• Google Maps hides the option in a menu.
• YouTube has two share buttons, neither of which look like the one in Play.
• Chrome hides the option in a dropdown (weird how it floats over the menu button, unlike Maps).
• Google+ takes us back to the regular share icon (with no text label).
• Google Docs uses a floating bottom menu (what?!) with a yet another icon and a “Send file” text label.

Things get even worse once you open the Share menu, though. Eden makes a good point: there’s clearly no single person in charge of this UX element for Android, even for Google’s own apps, despite the fact that they’re on every single Android phone sold outside China.
link to this extract

The hack was pulled off against the RF28HMELBSR smart fridge, part of Samsung’s line-up of Smart Home appliances which can be controlled via their Smart Home app. While the fridge implements SSL, it fails to validate SSL certificates, thereby enabling man-in-the-middle attacks against most connections.

The internet-connected device is designed to download Gmail Calendar information to an on-screen display. Security shortcomings mean that hackers who manage to jump on to the same network can potentially steal Google login credentials from their neighbours.

Yeah, it’s that “jump on the same network” thing which is the sticking point. I’d wager that most home networks are secured nowadays.
link to this extract

In one of the questionnaires [sent out to website operators] inquiring about “exclusivity obligations”—whether Google prevents or obstructs website operators from placing ads on their websites that compete with Google’s advertising business—the commission asks companies to update responses they made about the issue in 2010 and to provide a copy of all their advertising agreements with Google over the last four years.

A separate questionnaire, investigating the allegations that Google copies or “scrapes” content from rival sites, asks companies to provide more information about whether Google takes content, such as images, from the companies and uses it in its own online services.

The images question – raised by Getty – is about Google Images effectively bypassing visits to sites, and making copies of images. The latter is potentially a bigger problem than most other topics; “fair dealing” (the UK version of the US’s “fair use”) is hard to argue when you’re copying and storing entire image libraries.
link to this extract

Labour MP Chris Bryant, who lives in a rural constituency:

The government’s roll-out of broadband has been far too slow.

The Government has cannibalised the BBC licence fee to fund otherwise not commercially viable superfast connections to the tune of more than £1bn. Yet they have already missed their initial deadline of May 2015 and shifted it back by two and a half years to December 2017.

Even the 2017 deadline is only a hope, as senior BT executives and almost half of councils have warned it could end up being 2018 before the roll-out to 95% of the country is finished. But there is also another problem. The Government designed the tender process for the superfast roll-out in such a way that it was virtually impossible for anyone other than BT to win. The end result was that BT Openreach won 44 out of 44 contracts and its monopoly was reinforced.

Although BT Openreach, which owns the existing copper network and delivers the rollout, is nominally at arm’s length from BT, it is right that Ofcom is now considering whether this provides an unfair advantage to BT and whether it should be split off in the interests of transparency and fair competition.

No question; it should. BT Openreach had an operating profit margin of around 50% in the most recent quarter – while the rest of BT languished. BT OR is being milked, and we’re the cows.
link to this extract