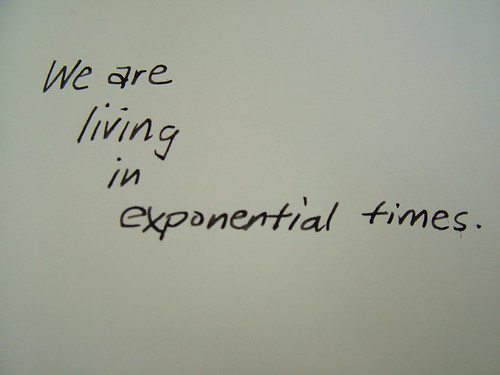 We really are. The trick is figuring out which ones matter. Photo by topgold on Flickr.

In Digital Wars (book! Kindle! iBook!), in the chapter about the struggle between Apple and Microsoft for primacy in music, I detailed part of the visit by Steve Ballmer to London in October 2004 when he made his now-infamous comments: “What’s the most common format of music listened to on an iPod? Stolen!”

More telling, at least in hindsight, was this part. The analysis is mine, direct from the book.

One journalist asked: “Microsoft’s smartphone has been a slow seller [its PocketPC-based phones sold such small numbers Microsoft didn’t announce sales figures until 2005, when they hit nearly 6m] while Apple and other companies have stolen a lead in portable music player markets. How will Microsoft tackle that?”
Ballmer’s reply: “Over time most people will carry a phone that has a little hard disk in it that carries lots of music. Mobile phones are about 600 million units a year. Now, how many devices do we want to carry? We have to have a more compelling value proposition. [Research In Motion’s] BlackBerry has a niche market position [at the time, around 2m users worldwide] but it’s not a very sticky device. It allows you to make bad phone calls but it’s a good Exchange client. We will see an explosion of larger keyboard devices.”

What’s interesting about that comment – apart from how well it illustrates Ballmer’s gadfly salesman’s mind flitting about the subject in search of a compelling way to persuade people to buy an integrated device that could make phone calls and play music – is its lack of technological foresight. First, that “most people would carry a phone with a ‘little hard disk”’. Apple had already bought up supplies of solid-state Flash memory for an iPod with no moving parts, and when meeting me four years earlier Hase had introduced the idea of a 1-gigabyte Flash chip – enough to hold about 250 music tracks. The Motorola phone being co-developed with Apple would store its songs in Flash memory; and any technologist knew that prices for Flash storage were, like those for hard drive storage, halving every year.

Second, the idea of the explosion of larger keyboard devices is classically short-term thinking that also ignores the relentless march of processing power. Although touch computing was still mainly in the laboratory, it was already conceivable: Nokia had that year built a prototype touch screen phone, and a small company called Fingerworks had been working between 2001 and 2005 on “multi-touch” systems for screens, and making presentations at conferences. A technologist – an engineer – keyed into the industry’s future would have known of it and seen its direction.

Very few companies are able to envision what the future will look like. Steven B Johnson wrote about the importance of “adjacent technologies” for innovation and invention: that before you can make one technological leap, you need to have all the technologies available that will let you do that.

But you also have to have people who can see how the landscape will look when you fast forward five, seven, ten years. It’s not just Moore’s Law, with its constant doubling; it’s also the pricing and availability of other technologies such as screens, batteries, sensors, and their integration with existing materials. The 2007 iPhone was unimaginable to almost anyone in 2002; by 2012, there was a feeling that it was old hat, and the shift towards wearables was already in full swing (the Pebble first appeared in 2012).

So which companies are good at doing this?

Having covered the technology space for decades, there are still only two companies which in my view reliably spot the future and move towards it, and shape themselves and their products to line up with it.

The first: Google. Larry Page and Sergey Brin have proven, again and again, that they can see what’s coming around the corner, and position themselves (and their company) for it. Internet search? Minor problem in 1996, when they started on it. But they could follow the growth, and see the oncoming problem: a bazillion sites and no proper index.

Fast forward to 2005: while Eric Schmidt is busy chief executive-ing, Page and Brin investigated and bought a small mobile startup called “Android”. They didn’t even refer the purchase to Schmidt. They did it because they could see that the mobile internet would be the future, and that they had to be part of it with their own mobile platform; Android was a protective measure against Microsoft cornering the smartphone market and potentially locking out Google search.

It happens again and again. Collaborative editing through Google Docs (another purchased company). Google Maps (another purchased company). The self-driving car initiative, which puts together the improving capabilities of sensors, maps, computation and control, makes sense in hindsight; but to start work on it when it’s years away from being commercial so that you can steal a lead on the companies that are already well-placed is part of shaping the future. (This doesn’t mean that Google will be the first, or only, company to succeed with SDCs, or even that it will; but it’s seeing that possibility.)

There are tons more examples at Google, though many of them are still in the ferment of development; we don’t know if they’ll be farsighted or just overambitious when we look back in five years’ time.

The second company that keeps seeing the future: Apple. The original iPod grasped the idea of music, and miniaturisation, wrapped in a beautiful design. The iPhone grasped the burgeoning capability of multi-touch (which Apple had already explored for years) along with the promise that Google had previously seen, and wrapped it in a package that had Andy Rubin (head of Android) hastily scrapping plans for a BlackBerry-alike and thinking immediately of an iPhone-alike. (For that immediate insight too Rubin deserves praise.)

Even the word that leaks out of what Apple hasn’t done shows that it’s trying to grab the future. Take the “nope, no TV” story that appeared in the Wall Street Journal, interestingly timed just after Carl Icahn published a long screed insisting that Apple was going to release a TV next year. (Hard not to see this as Apple putting the story out there to calm the stock market.)

Apple had searched for breakthrough features to justify building an Apple-branded television set, those people said. In addition to an ultra-high-definition display, Apple considered adding sensor-equipped cameras so viewers could make video calls through the set, they said.

Ultimately, though, Apple executives didn’t consider any of those features compelling enough to enter the highly competitive television market.

The sensor-equipped cameras sounds like Apple was trying to make use of technology acquired from PrimeSense in November 2013. At the time, I thought that the amount spent pointed to Apple wanting to put the technology into a product within a year – as had happened with Authentec (fingerprint unlock) and Anobit (SSD technology).

Here’s what PrimeSense had:

So PrimeSense is important, and Apple wants to use its technology soon. Its 3D sensors have a range of up to 3.5 metres – about the depth of the typical living room, or the sort of distance most people sit from a TV set – and were used in the original Microsoft Kinect add-on for Xbox. (For the second-generation Kinect, Microsoft has moved to a different supplier – which it acquired.)

We know what the original Kinect could do: it could detect faces, movements, people and map them all in 3D space. So what is Apple interested in doing around that?

Now you know: it wanted it for a TV. But the use case wasn’t compelling. Waving at your TV is not, apparently, the future.

You might be wondering where Microsoft is on this list, and Facebook, and a multitude of others. Microsoft – well, it hasn’t been able to overcome the contradictions of its own strategy taxes to be able to embrace the future and tear down its past. (Satya Nadella is doing that now, to some extent, but it’s long overdue.) Look again at that extract from my book at the top. Ballmer shows no sign of understanding what was coming, of how quickly the deluge would overwhelm the space. The Zune (2006) used a spinning hard drive, fer Crissake, when the iPod nano (SSD) had come out in September 2005.

That’s the other part of seeing the future: being able to let go of the past. Apple and Google have been able to shrug and say “OK, on to the next thing” in many cases, and let their old products die. Google search doesn’t die, of course, but that’s because it’s still an essential task for many. Equally, Google has been happy to cull products when they don’t fit the future it’s expecting.

Facebook hasn’t had enough time to show us what and how it can shape the future, and also I think that its reluctance to embrace hardware (understandably) also means that it’s reliant on others to lead the way. That would be Apple and Google, though, especially through mobile, where Google’s Android is driving the evolution of all sorts of adjacent industries to the smartphone (camera optics, GPS chips, batteries) and Apple is showing what really effective user interfaces and experiences feel like (the Watch is a giant leap, but one where you don’t realise that the ground has moved underneath you).

I’d love to know which other companies have shown that they can spot the future, and pivot themselves towards it repeatedly. Sure, Dropbox and Box foresaw storage being free; but what else have they seen? What are the other enterprises that have regrouped themselves and solved a problem that was coming our way five years ago, or are solving a problem coming our way in five years’ time? Do tell me your thoughts.

3 thoughts on “A vision of the future: the only two companies which get it right”