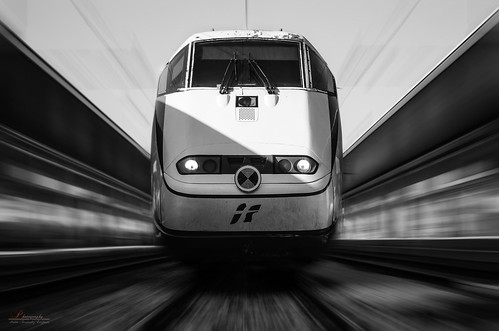 Speed: Facebook’s got it. Photo by _hadock_ on Flickr.

A selection of 8 links for you. Like butterflies, only linkier. I’m charlesarthur on Twitter. Observations and links welcome.

Tools don’t solve the web’s problems, they ARE the problem » QuirksBlog

The web definitely has a speed problem due to over-design and the junkyard of tools people feel they have to include on every single web page. However, I don’t agree that the web has an inherent slowness. The articles for the new Facebook feature will be sent over exactly the same connection as web pages. However, the web versions of the articles have an extra layer of cruft attached to them, and that’s what makes the web slow to load. The speed problem is not inherent to the web; it’s a consequence of what passes for modern web development. Remove the cruft and we can compete again.

The question is, how is Facebook speeding it up, given that it’s going to be shifting the same content? Data compression?

Christopher Mims on how the post-1980 “millennials” are moving into a new stage in life:

Data from comScore suggest most switching between Android and iPhone is in favor of Apple, and iPhones have a significantly higher average selling price than Android. So we can assume that, all other things being equal, as millennials age and their earning power increases, their taste in consumer electronics will become more expensive.

This is good news for Apple—and others targeting the higher end of the product spectrum. It’s also fantastic news for pretty much the entire consumer-electronics industry and countless online retailers such as Amazon: A giant demographic bulge is about to enter 20 years of peak earning power. This is a generation that likes its on-demand services, which means the coming decades will almost certainly see more Uber rides and same-day deliveries than ever.

In a nutshell, some European telcos feel they can “get away with” harassing Google and to a lesser degree Apple and Facebook, and get air-cover from their national regulators and the European Commission. While the current trials might have the convenient excuse of “protecting users’ dataplans”, the reality is much more duplicitous – they are jealous that Google has out-innovated and out-maneouvred them, in a similar fashion to their rhetoric about “OTTs”, when they have been asleep at the communications wheel for 20 years…

…[Among advertisers’ countermeasures to such a move] Encryption of content is the most obvious. It is already widespread in mobile, and is growing fast – in some networks, more than 50% is encrypted. There are multiple styles, ranging from SSL built-in to HTTPS traffic, SRTP for WebRTC traffic, through to using compression and proxy servers. Some of these are still theoretically “blockable” based on IP address, but the risk of false positives increases hugely. The inclusion of Google’s SPDY technology into the HTTP2 standard has pretty much ensured this is a one-way ratchet for web traffic in future.

As Bubley also points out, tons of mobile connections are actually made over Wi-Fi. And these points are only the beginning.

As well as the US-based global market leader Qualcomm, MediaTek must contend with China’s Spreadtrum, a chip designer whose processors are gaining a growing share of the Chinese market. Meanwhile shares in Ningbo-based Sunny Optical, which supplies camera modules to the likes of Xiaomi and Lenovo, have doubled in the past year.

“It’s clear the Chinese brands prefer to have Chinese suppliers,” says Nicolas Baratte, head of technology research for CLSA. “There is a different type of understanding between Chinese companies. The Chinese supply chain is amazingly flexible in terms of tolerance for specification change and redesign, and flexible payment terms.”

Yet with the Chinese market slowing, he adds, some Chinese suppliers — notably phone assembly groups such as Wingtech and Longcheer — are increasingly pinning their expansion hopes on work for faster-growing brands from other countries, especially India.
A reliance on foreign customers has been thrust upon Japan’s handset component suppliers by that country’s dramatic decline in the mobile phone market — but they have responded strongly according to analysts who say Japanese groups account for a third of the parts found in the iPhone, while achieving strong sales of high-tech components to Chinese producers.

A “hostile takeover” by scammers, who got access to the domain details and changed it to their own:

Sladinki007 says that NovaKing must have been devastated by what happened. A life’s work was completely ruined in a few days and access to personal domain names was gone as well.

While EZTV could technically start over using a new name the group’s founder decided to throw in the towel. Too much had already been lost. The group had always been a “fun” non-profit project, and the recent troubles took the fun away.

The scammers, meanwhile, continue to operate both the .it and .ch domain names and are now distributing their own torrents (sourced elsewhere) with the hijacked EZTV brand. They pretend to be the real deal, sending out misleading and false status updates, but they’re not.

Having control over NovaKing’s email address the scammers even reached out to other torrent site operators, claiming that EZTV was back in business. However, most knew better not to fall for it and have retired official EZTV uploader accounts.

So someone who enabled widespread torrenting of TV content (which – astonishingly – doesn’t actually make itself for free) gets scammed and gives up? A “life’s work”? Strike up the world’s smallest violin.

Samsung Electronics is riding high with its share of the global DRAM market at 40%.

According to a report on performance in the first quarter of this year published by Samsung on May 17, the company accounted for 43.1% of the DRAM market in Q1 2015, up 2.2% from the number for the entire year of 2014. The figure in Q1 2015 is a nearly 6% increase from the total number for 2013. That data that was mentioned was compiled by market research firm IDC.

Based on market research firm DisplaySearch’s data, Samsung’s share of the global display panel market was 21.8% in Q1 2015, up about 1% from the previous year. The tech giant explained that it is responding to market demand with a full line-up, from ultra large premium displays to those for entry-level UHD and curved TVs.

It made a loss on the TVs, but grew its market share. Could it corner the whole DRAM market? Weird thought.

Currently in development, the features seek to enhance Apple Watch security, connectivity with other Apple devices, health and fitness features, Wi-Fi capabilities, and integration with third-party applications. Additionally, Apple is also priming major updates for the Apple TV in both the hardware and software departments, including Apple Watch integration. Below, we detail what users can expect from Apple Watches and Apple TVs in the future…

Includes a “Find My Watch” which sounds more like Bluetooth leashing – if the Watch gets some distance away from the phone. There are also promises about health, and others, though they’re also cautioned as “possibly some way off”.

today’s appellate opinion reverses the trade dress-related part of the district court ruling and, on that basis, remands the case for a new trial. A new jury will have to determine damages for all products the first jury found to have infringed an Apple trade dress: the Fascinate, Galaxy S (i9000), Galaxy S 4G, Galaxy S II Showcase (i500), Mesmerize, and Vibrant phones. The total amount of damages (these were only at issue in the 2012 retrial, not the 2013) retrial was over $380m.

The original jury verdict only specified damages by product, but not by product and intellectual property right. That’s why the total damages amount for those products must be redetermined. There’s no way to simply subtract the part that related to design patents.

The Federal Circuit agreed with Samsung that it would have been entitled to judgment as a matter of law (JMOL) on the functionality of the trade dresses on which Apple prevailed. In all other regards, such as invalidity of design and software patents, the Federal Circuit sided with Apple.

Oh good grief. Another trial. Just the other day I was thinking of how Google’s hurried purchase of Motorola for the ludicrous garbillions of dollars belonged to a different age when people thought patents would make a difference in the smartphone struggle. This is nostalgia reflux.

Note though that the appeals court didn’t reverse the jury verdict – as some wilder misunderstanders of legal process had forecast. Judges don’t reverse juries in civil trials without exceptional cause.