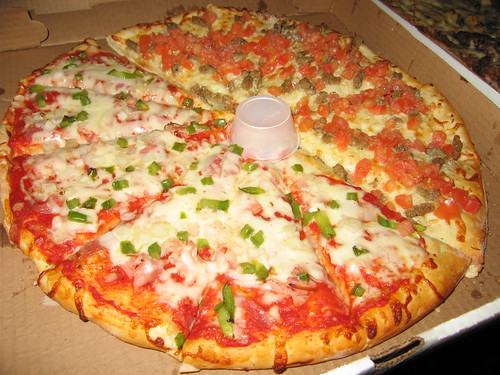 Could I have that delivered by a hostage negotiator, please? Photo by The Eggplant on Flickr.

A selection of 9 links for you. Spread them all over. I’m charlesarthur on Twitter. Observations and links welcome.

Relying on product reviews? Knowing how a company treats its customers is just as valuable » NYTimes.com

As it stands, there is no one-stop website to see reliable ratings for customer service. In part, that is probably because customer service can be such a challenge to measure, said Matthew Dixon, an executive at CEB, a business advisory firm. His studies found that when people have positive customer service experiences, they tend not to share them.

“But when they’ve been wronged, they literally will tell anybody who will listen,” Mr. Dixon said.

It seems like a no-brainer that consumers stick with brands offering solid customer service. Apple, which has more than $190bn in cash, is well known for its Genius Bar, the service stations at Apple stores where customers can seek help directly from the company’s trained technicians. Amazon, the largest online shopping site in the United States, is celebrated for its customer service.

Wouldn’t it be great if we could reliably research more companies with quality service, beyond relying on word of mouth?

Sure, but Apple’s cash isn’t the cause of its customer service – it’s the result.

The first batch of invites to Google’s phone service, known as Project Fi, are on the way. That’s the good news. Make sure you read all of the details before you accept an invite though: The bad news is that you’ll give up a few great features from Google Voice if you switch to Project Fi.

A Reddit member shared images of the Project Fi signup process after receiving an invite and this picture in particular illustrates what Google Voice features go away when you choose Google’s new phone service:

It doesn’t appear through the signup process that there’s a way to switch back from Project Fi to Google Voice either, although Google could have a provision for that in the future. The company is clear, however, that if you don’t migrate your Google Voice number to its new service, that number will be released.

“Making and receiving calls using Google Talk” seems a lot to give up if you like it.

We submerge the watches, then check them for proper functionality immediately upon removal from the chamber, then again 24 hours later. The stainless-steel Apple Watch passed the test on the first try. The first aluminum Apple Watch Sport we put through our immersion test seemed fine when we took it out of the tank, but we experienced problems with it 24 hours later. We then tried two more samples, which showed no problems, so the Apple Watch Sport passed our water-resistance test.

The Sony SmartWatch 3 was the only watch that did not pass our water-resistance test. Two consecutive samples did not function properly after being submerged for 30 minutes at 3.3 feet. Because of its poor performance in this test, the Sony fell to the bottom of our rankings.

In the end, our top-rated smartwatch is the stainless-steel Apple Watch. Its performance on the scratch-resistance test and excellent scores for ease of pairing and ease of interaction make it our top choice. Not an iPhone user? Not to worry, several Android-compatible models and one multi-OS-compatible smartwatch got very good overall scores as well.

You have to be a subscriber to read it all, though.

Home Depot Inc. has the goal of offering Apple Inc.’s mobile-payment platform at its more than 2,000 stores, which would make it the largest retailer yet to accept Apple Pay.
“It’s something we’d like to do,” Steve Holmes, a spokesman for Atlanta-based Home Depot, said on Tuesday. However, a deal with Apple isn’t in place, so the plan isn’t final, he said. The chain, which currently accepts PayPal, also may add other kinds of mobile payment, he said.

1) “has the goal of offering”? Wouldn’t “wants to offer” serve as well, but more concisely?
2) America’s financial and payment system continues slouching into the 21st century.

Cho Jin-young with the super-earliest reaction to the G4:

the higher subsidies than the Galaxy S6 is not an attractive enough factor to promote its sales, based on customer response on the two days after release.

After the G4 was unveiled, there were also mixed views whether the model will be a big hit. There are some views that it will be difficult to accomplish the sales target of 12m units. Kim Hye-yong, an analyst from NH Investment & Securities, said, “The sales target of the G4 does not seem easy to accomplish. The competitors now have better products than they used to when the G3 was released. It seems there is no problem with performance and heating of the G4, but its high-end image could take a hit.”

On the other hand, some believe that the G4 will have better results than the G3. Park Kang-ho, an analyst at Daishin Securities, said, “The G4 will struggle at first with its weak brand status compared to the Galaxy S6 and the iPhone 6 and the limit of the product lineups. When reflecting the differentiated element of camera modules, however, the sales of the G4 this year will reach 7.7m units, surpassing the 5.8m units of the G3 in 2014.”

The G4’s camera module (from Sony?) is f/1.8 – faster (ie gathers more light) than the iPhone 6 or Samsung Galaxy S6. It also has a removable battery (remember them?) and SD storage. Whether LG can use those factors as a lever to win sales from Samsung and Apple remains to be seen. But at least they’re now USPs compared to most high-end flagships.

Daimler said it had brought the new self-driving technology to the desert, southwestern state after European governments were slower to approve regulations for autonomous trucks. Nevada was also one of the first states to allow autonomous passenger cars.
However, the company said it would require far more states to accept the technology before it could show its potential by handling road freight deliveries “from coast to coast”. The vehicle will be able to operate autonomously only in Nevada — when it crosses state lines the driver will have to take the wheel.
Wolfgang Bernhard, chief executive of Daimler’s bus and truck division, said autonomous driving would sharply reduce crashes from driver error. Driver error — often a result of fatigue or distraction — leads to about 90% of crashes involving trucks…

…The vehicle has already undergone tens of thousands of hours of testing on Nevada’s roads and will be immediately available for full commercial use, although Daimler will continue to monitor its performance.
“This is not a testing licence,” Mr Bernhard said. “This is a full operating licence. We believe that these vehicles and systems are ready.”

Not mentioned: the maps provider for Daimler. That’ll be Nokia’s HERE, currently up for sale, which vehicle makers including Daimler are considering bidding for.

Hostage saves herself via Pizza Hut app: “Please help. Get 911 to me.” » Ars Technica

According to a Highlands County Sheriff’s Office press release, Cheryl Treadway, a woman from Avon Park, about 85 miles southeast of Tampa, had been arguing most of the day with her boyfriend, Ethan Nickerson, who carried “a large knife.”

As the agency wrote:

I’m going to download the Hostage app in case I need a pizza.

Well now. Ain’t that a thing. And where would all that indexing be going, hmm?

Craig Hockenberry is mad and he ain’t gonna take it no more:

I started reporting these issues early in the Yosemite beta release and provided tons of documentation to Apple engineering. It was frustrating to have a Mac that lost its network connection every few days because the network interfaces were disabled while waking from sleep (and there was no way to disable this new “feature”.)
Regardless of the many issues people were reporting with discoveryd, Apple went ahead and released it anyway. As a result, this piece of software is responsible for a large portion of the thousand cuts. Personally, I’ve wasted many hours just trying to keep my devices talking to each other. Macs that used to go months between restarts were being rebooted weekly. The situation is so bad that I actually feel good when I can just kill discoveryd and toggle the network interface to get back to work.
Only good thing that’s come of this whole situation is that we now have more empathy for the bullshit that folks using Windows have suffered with for years. It’s too bad that Apple only uses place names from California, because OS X Redmond would be a nice homage.

Well, he doesn’t like having to take it. The puzzle is why Apple replaced mDNSresponder (which worked fine, as far as most people can tell) with discoveryd, which doesn’t. I’ve seen discoveryd go runaway and eat up CPU, though killing it seems to solve the problem.