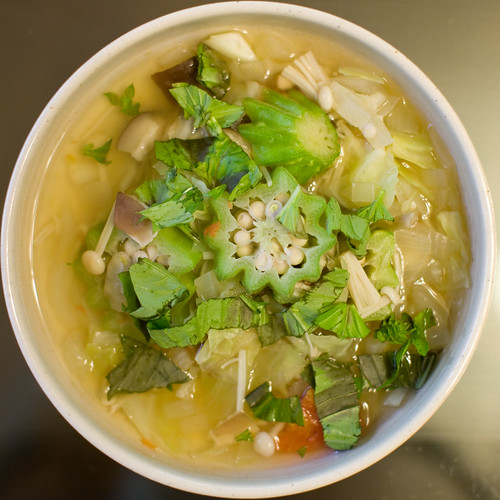 Soup: currently outside the “strategic horizon” of smart devices. Photo by Joi on Flickr.

A selection of 9 links for you. Go on, count them – don’t let a machine kill that job. I’m charlesarthur on Twitter. Observations and links welcome.

Dumb ‘smart’ gadgets: the bubble is set to burst » WSJ

I believe I have identified the one thing in tech that is incontrovertibly in a bubble. To know whether a product or startup is in this category—which I’m confident will see a shakeout leaving few standing—just look for this phrase in their marketing materials: “The world’s first smart…”

…Anthony Ortiz, the man behind the world’s first smart plate, insists that plates are just the beginning. What about fans of soup? I asked him. “If you’re going to make soup, that’s not what we do,” says Mr. Ortiz. “That would be something that goes in a bowl…. The bowl is something that could be on the strategic horizon for us.”

I bet you never knew crockery could have a strategic horizon.

For those who can bear the pain, biohacking, where computing devices are injected under the skin, provides a novel way to acquire real stealth to sneak through both physical and digital scans. That’s why US navy petty officer Seth Wahle, now an engineer at APA Wireless, implanted a chip in his hand, in between the thumb and the finger – the purlicue apparently – of his left hand. It has an NFC (Near Field Communications) antenna that pings Android phones, asking them to open a link. Once the user agrees to open that link and install a malicious file, their phone connects to a remote computer, the owner of which can carry out further exploits on that mobile device.

Filed for “when you need a character in a heist film who can somehow get past security scans”. Not filed under “things to worry about in the real world.”

Circa: what went wrong » Monday Note

Frederic Filloux fillets the news-aggregating failure that Twitter is reckoned to be picking up:

#3. Editorial uniqueness remains a key success factor. And Circa didn’t have it. Great packaging is one thing, but it can’t support itself without the help of original, specific, identifiable editorial. Since its inception, the web has been plagued by the commoditization of information. As social vastly amplifies that trend, being able to develop its own editorial identity remains critical for any media.

Well, Flipboard doesn’t have a “voice” (choice of stories with a consistent viewpoint) except the one you choose because it hoists on your Twitter/Facebook/etc feed). But lack of editorial “voice” is a common problem with the aggregation apps I see. I pick sites by voice. (It’s probably why you’re here.) No voice = no reason to come back.

The Dickonomics of Tinder » Medium

Some will read my gleeful rejections on the many faces I encounter on Tinder as evidence of a disturbing uptick in malevolent, anti-male sentiments among single straight women. It is not. It is evidence of us arriving nearer to gender equilibrium where men can no longer happily judge the clear and abundant photos and carefully crafted profiles of women but become incensed when they take the opportunity to do the same.

It was not always thus.

When I joined OKCupid six years ago, I dutifully created a well-rounded profile complete with accurate photos and thoughtful responses to the site’s profile prompts; though I was 23, I generously set my age limit for prospects at 40. For my efforts, I was immediately rewarded with an inbox full of messages that were mostly variations on “hey ☺” and “What up” from an army of blurry and sometimes headless mirror selfies who had either not read my profile or actively sought women with whom they’d share only mutual disdain.

Oh, this is such a wonderful piece. (Side note: published on Matter. Wasn’t that sorta a science reporting thing? No matter.) Should be obligatory reading for pretty much all males under 35.

tl;dr: Storage of electricity in large quantities is reaching an inflection point, poised to give a big boost to renewables, to disrupt business models across the electrical industry, and to tap into a market that will eventually top many of tens of billions of dollars per year, and trillions of dollars cumulatively over the coming decades.

He things the Tesla Powerwall “is a big step towards disruption“.

Apple has been using its considerable power in the music industry to stop the music labels from renewing Spotify’s license to stream music through its free tier. Spotify currently has 60 million listeners, but only 15 million of them are paid users. Getting the music labels to kill the freemium tiers from Spotify and others could put Apple in prime position to grab a large swath of new users when it launches its own streaming service, which is widely expected to feature a considerable amount of exclusive content. “All the way up to Tim Cook, these guys are cutthroat,” one music industry source said.

Sources also indicated that Apple offered to pay YouTube’s music licensing fee to Universal Music Group if the label stopped allowing its songs on YouTube. Apple is seemingly trying to clear a path before its streaming service launches, which is expected to debut at WWDC in June. If Apple convinces the labels to stop licensing freemium services from Spotify and YouTube, it could take out a significant portion of business from its two largest music competitors.

As was pointed out, if someone in the music business calls you “cutthroat”, then wow. But would the labels really be able to keep free music off YouTube? They might like to, but it’s the elephant in the room in any music streaming question.

The leaked document suggests Tidal pays a weighted average of .0012 cents per stream and 70% of revenue to rights holder. That revenue share has since changed since Jay Z acquired parent company Aspiro as he proclaimed the service pays 75% to rights holders less than a week earlier.

The statement reads: “for the same period (March 2015) as this purported ‘leaked’ statement, Tidal paid an average royalty per stream of $0.024-0.028.” This would place its royalty payments at approximately four times higher than that of Spotify’s, which pays rights holders between $0.006 and $0.0084. DigitalMusicNews responded to Tidal’s statement clarifying the statement was “issued by a digital distributor servicing the independent label” but does not refute the authenticity of the statement.

Seems highly unlikely that the document would be fake to me. The only way really for Tidal to get this straight would be to publish more statements – probably not what it wants.

The (very) big fight for the small screen » Fortune

The secret to BuzzFeed’s success—the thing that Frank, Gaulthier, CEO Jonah Peretti, and his staff of more than 900 believe makes BuzzFeed different from other media companies—is its data-driven approach. The company employs 12 data scientists and 11 researchers to crunch the numbers on the approximately 500 posts it publishes each day. Every list, listicle, article, essay, photo, video, upvote, comment, Thumbs Up, Tweet, Like, Heart, Pin, Share, Reblog, Retweet, LOL, WTF, OMG, and Ew represents a data point to be scrutinized. From there, BuzzFeed tests hypotheses to determine what made the content successful, in hopes that each successive piece of content will be even more perfectly engineered for irresistibility. “You can’t just do what [you think people] want, because people like to be surprised and exposed to new things,” says Peretti.

Unlike a Hollywood studio, which might produce five films a year, BuzzFeed is churning out an average of 50 videos a week, and taking advantage of the opportunities to test everything from characters and actors to theories about human behavior.

I’m tempted to say “The secret to Buzzfeed’s success so far“. This is the internet, and things can change quite fast.

Luigi Vigneri and pals from Eurecom in France have …come up with an automated way to check the apps in Google Play and monitor the sites they connect to. And their results reveal the extraordinary scale of secret connections that many apps make without their owners being any the wiser.

Vigneri and co began by downloading over 2,000 free apps from all 25 categories on the Google Play store. They then launched each app on a Samsung Galaxy SIII running Android version 4.1.2 that was set up to channel all traffic through the team’s server. This recorded all the urls that each app attempted to contact.

Next they compared the urls against a list of known ad-related sites from a database called EasyList and a database of user tracking sites called EasyPrivacy, both compiled for the open source AdBlock Plus project. Finally, they counted the number of matches on each list for every app

The results make for interesting reading. In total, the apps connect to a mind-boggling 250,000 different urls across almost 2,000 top level domains. And while most attempt to connect to just a handful of ad and tracking sites, some are much more prolific.

Vigneri and co give as an example “Music Volume Eq,” an app designed to control volume, a task that does not require a connection to any external urls. And yet the app makes many connections. “We find the app Music Volume EQ connects to almost 2,000 distinct URLs,” they say.

Their research is on ArXiv. We’ve seen this before, but not studied on this scale. (The original piece is headlined “smartphone apps”, but it’s clear this is only looking at Android, not iOS.)