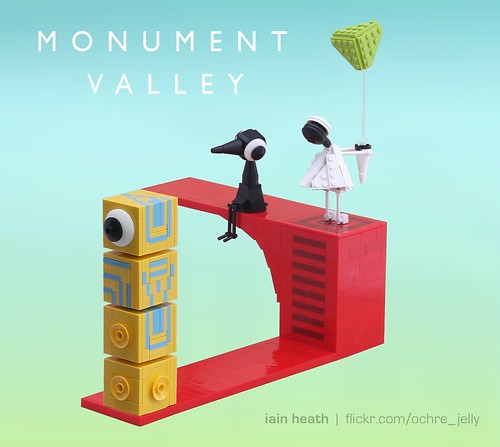 Available in Lego before it reached Windows Phone. Photo by Ochre Jelly on Flickr. (See their photostream for how they achieved this “impossible” shot.)

A selection of 9 links for you. Set them free. I’m charlesarthur on Twitter. Observations and links welcome.

Game of fear: the story behind GamerGate » Boston Magazine

Zachary Jason with a fabulously detailed yet clear recitation of what most of us know:

[Eron] Gjoni, a software engineer, had set out to construct a machine to destroy his ex. Every written word Quinn had ever entrusted with him—all of her flirtations, anxieties, professional grudges, and confessions about her family and sex life—would serve as his iron and ore. He scoured their entire text and email history, archiving and organizing Quinn’s private information on his laptop and cell phone. Then he typed it all in black and white — minus, of course, the tones in their voices, their laughter and tears, and any context whatsoever.

Of course, Gjoni could have just deleted the document, along with Quinn’s phone number and email address, and tried to woo one of the millions of other women on OkCupid or joined any of the roughly 5,000 other dating sites. He could have posted his thoughts on a blog and omitted her name. After several days, though, Gjoni decided to go through with it—after all, he was protected by the First Amendment, right?

Gjoni comes across as being somewhere on the autistic spectrum. Also, a real jerk.

Apple still leads the overall market despite five consecutive quarters of negative annual shipment growth. Apple shipped 12.6m iPads in the first quarter, capturing 26.8% of the market in volume and declining -22.9% when compared to 1Q14. Samsung (19.1% share) maintained its second place in the market despite a -16.5% decline in shipments compared to the same period last year. Lenovo (5.3% share), Asus (3.8 %) and LG (3.1%) rounded out the top 5 positions. LG’s year-over-year growth was notable as it continues to benefit from US carriers’ strategy to bundle connected tablets with existing customers.

“Although the tablet market is in decline, 2-in-1s are certainly a bright spot,” said Jitesh Ubrani, Senior Research Analyst, Worldwide Quarterly Tablet Tracker. “While 2-in-1, or detachables, still account for a small portion of the overall market, growth in this space has been stunning as vendors like Asus, Acer, and E-FUN have been able to offer products at a fantastic value; and vendors like Microsoft have been able to drive growth at the high end with devices like the Surface Pro 3.”

The smallest figure that IDC splits out is 1.4m, for LG, which implies that the Surface shipped fewer. Tablets took off fast; now they’re awaiting the replacement cycle.

Windows will win your heart by not caring » Remotely Mobile

In short, Microsoft has clearly shown it doesn’t care; but in a good way. They don’t care which apps you want to use, they’ll support them. They don’t care which operating system you want to develop on, they’ll support it. They don’t care if you are on a phone or a PC, they just seamlessly switch between the two experiences.This is huge for all of us end users. Why? Because in the end we don’t really care either. We just want to be able to use the apps and services we think are best to get the task done and move on. I don’t want to fight the OS, app, or device. I just want to do my work and be done with it. This is where mobility is ultimately pushing us and it’s great to finally have someone not care either.

The much-anticipated new Apple Watch has the lowest hardware costs compared to retail price of any Apple product IHS Technology has researched, according to a preliminary estimate by IHS and its Teardown Mobile Handsets Intelligence Service. The teardown of the Apple Watch Sport by IHS Technology estimates that the actual hardware costs are only about 24 percent of the manufacturer’s suggested retail price (MSRP). Estimated hardware cost to MSRP ratios for other Apple products reviewed by IHS are in the range of 29 to 38%.

The teardown of the Apple Watch Sport 38 mm by IHS Technology shows a bill of materials of $81.20 with the cost of production rising to $83.70 when the $2.50 manufacturing expense is added. The retail price of the Apple Watch Sport 38 mm is $349.00. The IHS Technology analysis does not include logistics, amortized capital expenses, overhead, SG&A, R&D, software, IP licensing and other variables throughout the supply chain such as the EMS provider.

That’s some low manufacturing expense for what the Watch looks like. And of course even if it’s right, that’s just the gross margin. Look at what it doesn’t include too.

Monument Valley: a fantasy world of impossible architecture and a beautiful, silent princess awaits you! Today we’re excited to share that Monument Valley is available to download from the Windows Phone Store.

Originally released on iOS just over a year ago. I wonder how many Windows Phone users have not heard of or played this on a friend’s phone. Or an iPad?

China is rewriting the rules of the mobile game, and Apple is still winning » The Verge

The recognition of China’s importance is evident everywhere in the mobile industry. HTC is, for the first time, introducing two flagship smartphones this year, with the One M9+ being tailored to the needs and preferences of the Chinese market. In February, around the turn of the Chinese New Year, Lenovo brought Motorola back to China, setting it up as a sort of exotic alternative to local offerings, one where user customization is paramount.

But no one has benefited from China’s growing appetite for smartphones more than Apple. Even as the developed world was becoming saturated with iPhones, Apple kept expanding its sales with the help of China. The iPhone first became available in China in 2009, relatively early in its now gloried history, and has kept growing in line with the country’s expansion in disposable income and smartphone demand. This past quarter, Apple sold more iPhones in China than in the United States, belying prognostications that the Chinese market wouldn’t be receptive to such a premium, high-margin device.

As I criticised The Verge yesterday for not seeking out points of view, I should point to this as exactly the opposite: Savov gets comments from analysts who know and understand the market to produce an insightful piece. (Though Nokia used to be HUGE in China, Vlad. Until Q1 of 2012, when its mobile revenue there halved, and halved again within a year.)

According to comScore MMX Multi-Platform, which provides an unduplicated view of usage across desktop, smartphone and tablet, Google Sites ranked as the top property with nearly 46 million combined desktop and mobile Internet users. The majority of Google Sites’ audience visited from both desktop and mobile platforms (66%), while 28% visited exclusively from desktop and 5% were mobile-only users. BBC Sites was the second most popular online property with a multi-platform audience of 40.6 million, 36% of which were mobile-only.

If you re-sort it by mobile-only, Sky actually comes top – and Google comes last.

One to really mull over. Can hardly accuse the news organisations of being behind the times.

While it has served as a legitimate platform for fans to support products and content they genuinely believe in and want to see become a reality, it is also ripe for scamming and incompetence. Case in point: Fonkraft, a $50,000 Indiegogo campaign that allegedly will culminate in the production of a Project Ara-style modular smartphone.

To date, the flex-funded (as in, even if it doesn’t reach the goal, the project still gets what money was raised) campaign has amassed over $25,000 from people who probably know no better, with over 130 phones funded by supporters. The team behind the campaign? Literally two people, neither of whom state where it is they previously worked (no LinkedIn profiles, either – or any easily locatable social media profiles – surprise!), what specific experience they have in the phone industry, or how they plan to build a phone with two people and $50,000…. or less, since it’s a flex-fund campaign. For the record, Ubuntu wouldn’t even build a regular phone for less than $32 million.

Also, these guys provide literally no insight on how their product would actually work in a technical sense. You just have to believe!

Incredible that IndieGoGo lets people keep money raised even if it doesn’t reach the goal. It’s an open invitation to those with absurd optimism or bad intent.

According to the latest research from Strategy Analytics’ Handset Country Share Tracker(HCST) service, China smartphone shipments grew 17% annually to reach 110m units in the first quarter of 2015. Xiaomi maintained first position, but Apple is rapidly closing the gap with 12% marketshare in second place.

China smartphone shipments grew 17% annually from 93.6m units in Q1 2014 to a 109.8m in Q1 2015. China smartphone growth on an annualized basis has slowed from 39% to 17% during the past year, due to increasing penetration maturity. This is the first quarter that China’s smartphone annual growth rate has been lower than the global average since 2010.

Xiaomi, Apple, Huawei are the top three. Notice the company that’s missing from that list. Seems Samsung sold below 11.2m smartphones in China in Q1. Is the S6 going to bring it back?