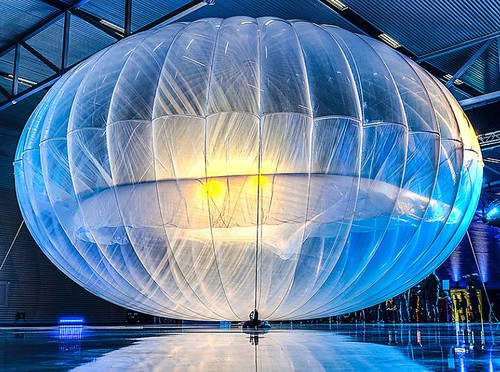 A Project Loon balloon. Photo by theglobalpanorama on Flickr.

A selection of 8 links for you. Links as in, you know, links. I’m charlesarthur on Twitter. Observations and links welcome.

Microsoft’s Q3 2015: Surface and Lumia up, but profit down » The Verge

Microsoft sold 8.6m Lumia devices in the most recent quarter, and the company says that’s an 18% increase over the prior year. Microsoft completed its acquisition of Nokia around this time last year, and neither company revealed Lumia sales at the time, but it’s safe to say they’re rising again. Either way, Windows Phone revenue has dropped by 16%.

While Microsoft is heading towards finalizing Windows 10 in the coming months, the PC market is still fragile. OEM revenue for Windows decreased by a massive 22% this quarter, following an equally bad quarter over the holiday period. Part of this decline is related to less business PC sales, and the general PC market as a whole. Office appears to be a mixed bag for Microsoft. While it’s helping drive commercial revenues, Office consumer revenues declined 41% due to the transition to Office 365 and weaknesses in Japan where Office is popular on PCs. However, Office 365 Consumer subscriptions have grown to 12.4m, so Microsoft is continuing to convince consumers that the cloud is the future.

is Uber’s surge pricing algorithm really doing what they claim? Do surge prices really get more cars on the road?

My analysis suggests that rather than motivating a fresh supply of drivers, surge pricing instead re-distributes drivers already on the road.

I collected four weeks worth of Uber’s dynamic pricing information from their own publicly available data for five locations in Washington, DC. Every 15 seconds between March 15 and April 11, I pinged their servers and collected the surge price and estimated waiting time for an UberX car at those locations. Though only a tiny sliver of all of Uber’s data, it provided an initial window into how their algorithms are working…

Reverse-engineering these algorithms seems to be the way forward.

Nokia Oyj, the Finnish company selling its money-losing maps business, is trying to drum up interest from some of the biggest names in technology including Apple Inc., Alibaba Group Holding Ltd. and Amazon.com Inc., people with knowledge of the matter said.
Those companies as well as Facebook Inc., a group of German carmakers, and private-equity firms are among the companies looking at Nokia’s maps operations, known as HERE, highlighting the ubiquity and utility of location-based services. Nokia is seeking more than €3bn ($3.2bn) from a sale of the unit, said one of the people, who asked not to be identified discussing private information.

Bought it for €8.1bn in 2008; valued at €2bn in the accounts last year. Big lossmaker; the question is how any company that bought HERE would be able to make the purchase worthwhile in monetary terms.

Google says its Project Loon is close to being able to produce and launch thousands of balloons to provide Internet access from the sky.

Such a number would be required to provide reliable Internet access to users in remote areas that are currently unserved by terrestrial networks, said Mike Cassidy, the Google engineer in charge of the project, in a video posted Friday.

The ambitious project has been under way for a couple of years and involves beaming down LTE cellular signals to handsets on the ground from balloons thousands of feet in the air, well above the altitude that passenger jets fly.

“At first it would take us 3 or 4 days to tape together a balloon,” Cassidy says in the video. “Today, through our own manufacturing facility, the automated systems can get a balloon produced in just a few hours. We’re getting close to the point where we can roll out thousands of balloons.”

Why Apple Watch margins should set a new record for Apple » carlhowe.com/blog

Last week, I asked readers to imagine how they’d manufacture a million Origami lobsters out of paper. I’m going to continue that though experiment theme this week with a different question. If you’re not interested in such context, skip ahead to the next section where we’ll dive into revisions to the model I posted last week.

Meanwhile, this week’s thought experiment question is this:

What were the parts cost and gross margin of a Johannes Vermeer painting in his day?

Johannes Vermeer, of course, was a modestly successful 17th century Dutch painter, known for such paintings as Girl with a Pearl Earring and The Music Lesson. Art historians the world over praise his works for their subtle portrayal of light and his use of brilliant and lifelike color. Today, historians attribute 34 surviving paintings to undoubtedly be Vermeer’s work. While priceless due to their rarity, owners who have sold Vermeer paintings have invariably seen prices in the tens of millions of dollars.

But what did they cost to paint?

In other words, why do we think it’s OK for art to have high added value, but not technology? The whole post is wonderful.

In Google case, do what’s best for consumers » TheHill

Since the FTC closed its [antitrust investigation] case in 2013, the search space has become, if anything, more competitive. In addition to competition from general search engines such as Bing, Google faces competition from Facebook, Apple (Siri) and Amazon — all of which perform search functions. There is vigorous competition in shopping sites in Europe with Amazon and eBay being the major players. Numerous local shopping sites provide additional competition. In fact, Google is a minor player with a very small share of this (online shopping) market. And there is a whole new world of apps through which consumers search for a variety of information, including product information.

Thus, despite the fact that Google’s share of general search is higher in Europe than in the U.S., it is unlikely the European authorities will now find harm to consumers or to competition where the U.S. authorities didn’t.

Lenard is a senior fellow at the Technology Policy Institute, whose “supporters” include Amazon, Facebook, Intel, the MPAA, Motorola, Yahoo and – hey! – Google. I include this to show the way that one can distort reality by chucking some names in: look at all the alternative search engines! Bing, Yahoo, DuckDuckGo, er, Yandex.. but the reality is that none has more than a tiny fraction of the market in Europe. It’s like Microsoft suggesting that there are loads of desktop OSs – MacOS, Ubuntu, FreeBSD, umm..

And while Google might be a minor player in the local shopping market, the EC data (and to some extent Google itself) suggests it would be nowhere if Google Shopping had to compete in the same way as all the other shopping sites – and hadn’t penalised the search ranking and access to AdWords of rivals (who then complained).

And, finally, “harm to consumers” isn’t the EC test for antitrust. It’s the US test.

Skipping the web » Remains of the Day

Having grown up in the U.S., the web was one of the first and still longest-running touchpoint to the internet. My first was using newsgroups in college, and the web came about towards the end of my undergrad days. I can understand why so many in the U.S. are nostalgic and defensive of the web as a medium. Seeing so much content and online interaction move behind the walls of social networks seems like an epic tragedy to many, and I empathize.

Many people in India, China, and other parts of the world, where bandwidth is low and slow, and where mobile phones are their one and only computer, have no room for such sentimentality. They may never have experienced the same heyday of the web, so they feel no analogous nostalgia for it as a medium. Path dependence matters here, as it does in lots of areas of tech, and one of the best ways to detect it is to widen your geographic scope of study outside the U.S. Asia is a wonderful comparison group, especially for me because I have so many friends and relatives there and because I still interact with them online at a decent frequency.

Mobile malware is like Ebola – an overhyped threat » Net Security

Reporting from the RSA Conference 2015: