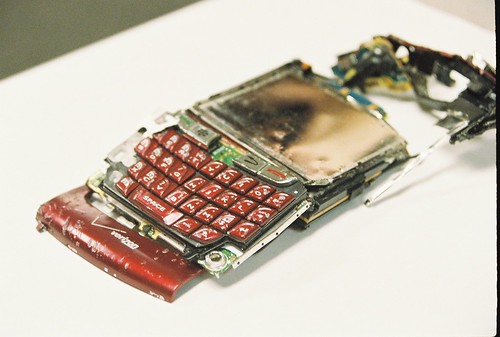 A broken business model? Photo by MattHurst on Flickr.

BlackBerry announced its fiscal fourth-quarter results on Friday, covering the period over December 2014 to the end of February 2015, and they were pretty woeful. Revenues came in at $660m, way below what analysts were expecting, and the company made an operating loss of $106m ($50m of which was adjustment for the potential value of the $1.25bn cash injection it got from a debenture issue). It managed to squeak a net profit, helped by $115m gained from selling its share in the Rockstar patent consortium.

I’m continually fascinated by BlackBerry, because it’s a company struggling to turn itself from one thing (a business that sells handsets and takes an ongoing fee from handling data for them) to another (a company that makes its money from software licensing from managing handsets in businesses).

BlackBerry’s problem is that it’s still stuck on the old model, while the new model isn’t coming up fast enough to help it. Here’s the revenue breakdown:
• hardware revenues (from device sales) were $274m;
• service revenues (principally from carriers paying it for carrying data for its BB7 handsets) were $309m;
• software revenues were $67m. (There’s another $10m of “other” which is things like currency hedging and handset warranties.)

Service with a smile

BlackBerry gets the vast majority of its services revenue from the Service Activation Fee (SAF) on BB7 handsets, which is a recurring monthly payment from carriers for carrying data. When people buy BB10 handsets, it doesn’t get an SAF. However, users of its BB10 handsets are counted as “subscribers” in its numbers – its latest 40F annual report says

BB7 and BB10 handsets can access that storefront. Later it says that

So both BB10 and BB7 users are “subscribers”, but only the BB7 ones generate SAF revenue.

Now consider this: BlackBerry isn’t gaining any new consumer subscribers. It’s losing them hand over fist, though it might be hanging on to some business users. BlackBerry is very coy about its subscriber count and how many BB10 handsets have reached end users, not mentioning them in its earnings releases, and squirrelling them away in its financial documents. But they can be unearthed if you’re determined enough. (I am.) Here’s the latest subscriber number, on p106 of the 40F, which was released some time after the financial results on Friday.

Detail from BlackBerry’s 40F report for the latest year: it says it has 37m subscribers.

Here’s how its subscriber count has been going – dug out, again, from details in financials going back over many quarters:

At the end of February 2015, the subscriber count was 37m. The total number of handsets that reached customers (“sell-through”) in the past eight quarters since BB10 was launched two years (eight quarters) ago is 26.2m. Digging back reveals how many BB10 handsets have actually shipped to end users – surely replacing existing BB7 handsets: just 10.1m.

BB7 handsets have been substantial for some time.

Two things:
• this suggests that 70% of BlackBerry subscriber handsets now in use were bought in the past two years.
• isn’t it amazing that BB10, the platform that was going to be BlackBerry’s salvation, has only sold two-thirds as many handsets as the platform it was supposedly making redundant two years ago. It’s as if the iPhone 4S were running iOS 6 and radically outselling the iPhone 6, or the Galaxy S3 were outselling the Galaxy S5.

So this is how the subscriber base looks, split into BB7 and BB10:

Then again, think of all the hardware revenue! Surely that would more than make up for it?

Services are super-profitable for BlackBerry because it has the infrastructure for it, and can easily handle the data volumes involved (it used to handle it for twice as many devices, after all). Another little detail I found in the financials is that in the fiscal year to end Feb 2015, services and software brought in revenues of $1,854m – but the cost of sales (ie how much it cost to do) was just $287m.

Here are the numbers for three preceding years:

Hardware slumps towards loss while services and software coin it.

And now the three most recent years:

For the past three fiscal years

Even if you treat software revenues as pure 100% profit, the services gross margin still comes out as 82%, even in a “bad” year.

Even if you assume software is 100% profitable, services come in with a margin of 82% or so.

So in our scenario where BlackBerry has lost $184.9m in service revenue (because all the handsets it sold were BB10), that means it has forgone $151.6m in gross margin profit in a single quarter. At a time when it’s struggling to show any profit (remember, it recorded an operating loss, because of things like R+D and marketing), that’s bad.

What price do handsets need to sell for to make up for that? Let’s first find out how much we need to collect. Take the $11.49 per-handset SAF revenue from the latest quarter: at 82% margin, that yields $9.42 in gross margin profit per BB7 handset per quarter.

How does hardware compare? Well, for BB10 hardware to be worth it for BlackBerry, it has to generate as much, or more, gross profit over three years.

They’re nowhere near that. Yeah, I know, the BlackBerry fans will tell me that the BB10 Classic is going to sell like crazy, because it looks like a BB7 handset, and that carriers are all behind the company, and so on. Look though at the price of the Classic: $449. At 10% gross margin (and taking the retail price as what BlackBerry gets, which it isn’t), that’s a hardware gross profit of $44.90 (and a service profit of $0). At 20% (which it won’t make at the tiny scale it operates on), the one-off hardware profit is $89.80.

On its current SAF, BlackBerry gets more profit from a BB7 handset in three quarters than a BB10 handset at 10% margin; or six quarters at 20% margin. You might argue that BB7 handsets lose money at sale while BB10 ones make it. The numbers don’t say that, though. BlackBerry’s numbers have all trended down ever since the launch of BB10, and its accounts are littered with writedowns on inventory.

In short? John Chen is pretty fortunate that BB10 handsets don’t sell that well, because they’d tear down the already faltering finances of the company. It actually makes better financial sense to keep selling BB7 handsets. The immediate handset profit is lousy, but the recurring revenues are great.

Now, it’s true that carriers are pushing down the SAF. It’s also true that BlackBerry hardware average selling prices (ASPs) are edging up – to $231 in the most recent quarter, when “most” (66% – it’s on page 128 of the 40F) handsets that reached customers were BB10s. That yields a gross profit margin of $9.24 – but unlike the SAF, that has to last over 12 quarters. (This is why one-off hardware is such a hard game to make pay, and why recurring high-margin software revenues is so great. Contrast the business models of Apple v Microsoft.)

Apart from continuing to slash costs and headcount, there’s no obvious way for Chen to square this circle. He needs enterprise customers to sign up to the BES 12 service (enterprise server), but it was very noticeable that whenever he was asked about this during the earnings call he said he didn’t have the numbers who had converted over with him:

John Chen – Chief Executive Officer: First of all after the — the EZ PASS program ended at 6.8 million licenses, no, I don’t have that number with me and I will have to look at some metrics.

Uh-huh. I bet if the numbers had been good, he’d have made sure that they were right there at his side. The fact he couldn’t offer anything didn’t sound good to me.

Still, it could have been worse. He could have had to tell people that they’d only sold BB10 handsets.

(None of this, by the way, is a comment on the quality or otherwise of BB10. It’s simply what emerges from the numbers. But I will say that the hope held out by BlackBerry fans that people will buy it for “security” is misplaced. When the head of the FBI is demanding back doors into iPhones and Android phones because they’re too secure, smartphone security has easily reached “good enough”.)

3 thoughts on “BlackBerry’s lucky that BB10 handsets sell so badly, or it would have real problems”