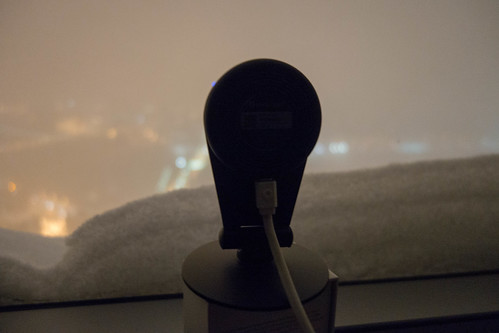 A Dropcam watches the snow fall, pretending to ignore you. Photo by Scott Beale on Flickr.

A selection of 10 links for you. Contains minimal Watch content. I’m charlesarthur on Twitter. Observations and links welcome.

Dropcam users are being asked to create Nest accounts — regardless of whether or not they own a Nest product — so they can use “new features and improvements” to their cameras.

The Verge reports that the new accounts will be used to support some of the integrations Nest promised when it acquired Dropcam for around $555 million in cash June 2014. It will also ensure that Dropcam customers have agreed to Nest’s updated terms of service.

Anyone who wasn’t worried before about Google acquiring these companies (it acquired Nest in January 2014; Nest then acquired Dropcam in June) before should be worried now.

But of course, you’ve already got a Dropcam (which looks pretty useful). So setting up an account, well..

Mark Wilson on Kelly Ellis’s allegations – which are serious, and go up as far as behaviour by Vic Gundotra – made over the weekend:

Google would much prefer to be seen encouraging women into technology but Ellis – who worked on the Google+ team – dismisses this as nothing more than “PR bullshit”. She also says that she was let down by co-workers who failed to back her up.

Ellis spent a good deal of time on Saturday tweeting a series of snippets about her time at Google where she worked from 2010 to 2014. The tweets started with a very blunt statement: “At Google I was sexually harassed by someone who was later promoted to director”. Dozens of tweets then followed giving more details about what had happened.

Now working as a software engineer at Medium, Ellis says that the harassment was the main reason she left the company back in July. She says “I don’t care if people believe me or not”, but, we have to refer to what she says as allegations. She says that Roderick Chavez, another Google engineer, harassed her:

Google hasn’t responded to the allegations at the time of this being collated.

Apple wants to be your iDoctor. Even if its devices aren’t actually FDA-approved, the apps it makes available that could offer up diagnoses and treatment will be.

Now that our iDevices are going to be collecting even more information from us, what privacy and security concerns do we need to be freaking out about?

“Freaking out about”? Asking about, perhaps. It seems there’s nothing to freak out about.

On September 11, 2014, [Gilad] Lotan, a data scientist, started researching a massive, coordinated, and failed hoax to create panic over an imaginary ISIS attack on a chemical plant in Centerville, Louisiana. The hoax included Twitter, Facebook and Wikipedia identities (some apparently human piloted, others clearly automated) that had painstakingly established themselves over more than a month. Also included: fake news stories, an imaginary media outlet called “Louisiana News,” and some fascinating hashtag trickery whereby a generic hashtag was built up in Russian Twitter by one set of bots, then, once trending, was handed over to a different set of English-language bots that used it to promote the hoax.

More interesting is the fact that the hoax failed. Lotan shows that Facebook’s Edgerank proved to be resistant to gaming using the process employed by the hoax’s creator(s); that Twitter clusters can be trumped by real news sources; and that Wikipedia’s vigilance was adequate to catching fakesters who create hoax pages.

One feels it’s important to add the proviso: “this time”. There’s more from John Borthwick on Medium. And speaking of Twitter bots…

Eden spent a weekend digging into the nests of fake accounts:

There appears to be several “loops” – that is bots which are in an almost closed network with each other. I see at least half a dozen circles – the rest appear to be following other fake accounts at random.

The centre of those circles appear to be real people. I can’t say why they have lots of fake followers – it’s possible that they – or someone else – has just bought them to make it look like they’re more popular than they really are. There’s no suggestion that they control the fake accounts.

One of the central nodes has 650,000 followers. It’s not possible to know quite how many of those are fake – I’m guessing the majority are.

It seems that there’s a nasty nest of these bots. In the last few weeks I’ve reported a dozen or so for spam – but with literately tens of thousands in the network it’s impossible for any individual to make a meaningful impact.

Jack Baruth starts with racing cars, then veers into watches…

Hublot and other watchmakers are busy CAD-creating their own “manufacture movements” to replace the generic ETA/Sellita/Valjoux movements found in their products. In this, the Cretaceous period of watch enthusiasm, the ability to engineer and manufacture one’s own mechanical watch movement is essential for “credibility”. Not that the genuine prestige watchmakers all used their own movements anyways, but there’s a certain amount of Cadillac-at-the-Nurburgring idiocy going on: Rolex makes their own movements, and they are a respected brand, so we need to have our own movements as well, even more complicated and feature-packed, and then we will be more respected than Rolex.

There’s just one little problem with that strategy. The proliferation of quick-bake “manufacture” movements is creating an entire generation of hugely expensive, amazingly complicated, completely “bespoke” watches which will be impossible to fix.

…and then he comes out the other side and goes into Porsches, and 993s v Boxsters, but it’s really about durability and inheritability. Very appropriate in light of you-know-what.

Who are the main players in the smartwatch market? Like the smartphone market, Samsung is going to be Apple’s main competitor. The South Korean technology behemoth sold approximately 1.2 million units in 2014, ahead of second placed Pebble with 700,000. The top three was rounded off by Fitbit who sold 600,000 smartwatches.

Fitbit does a smartwatch? Also, Motorola seems to have been subsumed into Lenovo, so that the Moto 360 looks like it did 500,000 units.

My one problem with these numbers is that they don’t fit with the number of Android Wear devices sold and activated, which we know is 720,000 (give or take a few).

Let’s say you make a product, and you have a lot of competitors, dozens, hundreds. Prices are falling. More people are piling into the market. Now it is time for you to design a new product. Do you experiment with a radically new form factor? Let a single designer attempt to craft a finely honed product that stands out for its quality? Or do you come out with a product that is just a modest upgrade of last year’s product, with no distinguishing design or features?

Really, I am kinda dumbfounded. That handset OEMs seem to be on a path of self-destruction. I visited every major OEM’s booth and dozens of smaller vendors. I am sure I missed one or two interesting devices with some novel feature, but at some point, I can only stare at identical black, plastic slabs for so long. There is nothing new or differentiated out there, and this cannot last.

I have to admit, at one point, I almost lost my temper. A couple times actually. The industry seems to be in some very complicated form of denial. And there seem to be a couple common threads to their excuses.

His idea of a QWERTY Android phone to sweep up the disenfranchised BlackBerry users is one that keeps being put forward, but nobody is brave enough to do. Point is it would have to be enormously tall, and what happens when you turn the phone sideways? Should it be a slide-phone like the G1?

If an algorithm wrote this, how would you even know? » NYTimes.com

The multitude of digital avenues now available to us demand content with an appetite that human effort can no longer satisfy. This demand, paired with ever more sophisticated technology, is spawning an industry of “automated narrative generation.”

Companies in this business aim to relieve humans from the burden of the writing process by using algorithms and natural language generators to create written content. Feed their platforms some data — financial earnings statistics, let’s say — and poof! In seconds, out comes a narrative that tells whatever story needs to be told.

These robo-writers don’t just regurgitate data, either; they create human-sounding stories in whatever voice — from staid to sassy — befits the intended audience. Or different audiences. They’re that smart. And when you read the output, you’d never guess the writer doesn’t have a heartbeat.

Consider the opening sentences of these two sports pieces:

“Things looked bleak for the Angels when they trailed by two runs in the ninth inning, but Los Angeles recovered thanks to a key single from Vladimir Guerrero to pull out a 7-6 victory over the Boston Red Sox at Fenway Park on Sunday.”

“The University of Michigan baseball team used a four-run fifth inning to salvage the final game in its three-game weekend series with Iowa, winning 7-5 on Saturday afternoon (April 24) at the Wilpon Baseball Complex, home of historic Ray Fisher Stadium.”

If you can’t tell which was written by a human, you’re not alone.

Cue observation about how many US news reports have read like they’re written by machines for years anyway.

Japan’s robot dogs get funerals as Sony looks away » Newsweek

“I can’t imagine how quiet our living room would have been if Ai-chan wasn’t here,” Sumie Maekawa, a longtime Aibo owner, told The Wall Street Journal, using an honorific suffix applied to girls’ names.

Tatsuo Matsui, who owns two digital dogs with his wife, added, “I can’t risk my precious dogs because they are important members of our family.”

Despite the loyal fanbase, Sony decided to discontinue the bot in 2006, after selling around 150,000 units.

“Our core businesses are electronics, games and entertainment, but the focus is going to be on profitability and strategic growth,” a Sony spokeswoman said at the time. “In light of that, we’ve decided to cancel the Aibo line.”

For years following the announcement, Sony would repair Aibos that experienced technical difficulties. But in July 2014, those repairs stopped and owners were left to look elsewhere for help.