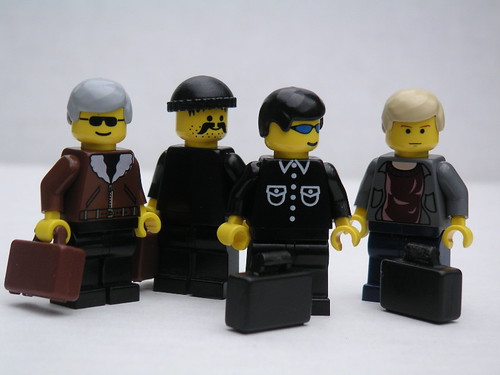 These guys just get everywhere. Photo by Dunechaser on Flickr.

Annoyed as some Apple customers may have been over being “force-fed” U2’s new album last fall, the impact of the free release is still visible five months later: 23% of all music users on Apple’s operating system listened to at least one U2 track in January-more than twice the percentage who listened to the second-placing artist, Taylor Swift (11%).

Quite a few of those who complained to me about the U2 album weren’t iTunes users at all. This seems to back up the suspicion that a lot of this noise was just commentariat chatter. (Link via Neil Cybart.)

Samsung smart TVs have been turned into dumb goggle boxes for the past two days – after the devices have been unable use the internet. Coincidently, Sony smart TVs are also having troubles using the web.

A Samsung spokesperson told The Register it is investigating reports that some of its web-connected tellies and Blu-Ray players are unable to stream video from YouTube, iPlayer, Netflix and other sites. The issue appears to affect Samsung D and E series TVs worldwide.

The televisions’ Smart Hub software, which helps people find stuff to watch and apps to use, is refusing to work – in fact, any software on the sets that tries to use the internet just simply won’t work, Reg readers have told us.

Problem seems to be DNS-related – the IP address at the far end has moved and the TVs can’t figure out how to find it. A dress rehearsal for the Internet Of Broken Things.

It’s starting to look like Superfish and other software containing the same HTTPS-breaking code library may have posed more than a merely theoretical danger to Internet users. For the first time, researchers have uncovered evidence suggesting the critical weakness may have been exploited against real people visiting real sites, including Gmail, Amazon, eBay, Twitter, and Gpg4Win.org, to name just a few.

I wonder how much feverish activity there is in other PC OEM headquarters as they check all their third-party install apps and contracts.

Rolfe Winkler, with one of the tightest, hardest-hitting intros [ledes, for American readers] you’ll see this week:

The online-video unit posted revenue of about $4bn in 2014, up from $3bn a year earlier, according to two people familiar with its financials, as advertiser-friendly moves enticed some big brands to spend more. But while YouTube accounted for about 6% of Google’s overall sales last year, it didn’t contribute to earnings. After paying for content, and the equipment to deliver speedy videos, YouTube’s bottom line is “roughly break-even,” according to a person with knowledge of the figure.

By comparison, Facebook Inc. generated more than $12bn in revenue, and nearly $3bn in profit, from its 1.3 billion users last year.

Google would like people to turn to YouTube as though it were TV. To which an analyst retorts that “there’s a lot of junk” and that it needs investment to get TV ad budgets. That’s been tried before, though.

Also, just 9% of viewers account for 85% of page views. It’s the “whale” model used by games like Candy Clash – not the “many watching a bit all the time” of TV.

Why I’m saying goodbye to Apple, Google and Microsoft » Medium

Dan Gillmor has renounced Those Three and is using Linux and a phone running CyanogenMod:

The tools I use now are, to the extent possible, based on community values, not corporate ones.

I’m not acting on some paranoid fantasies here. I’m emulating, in the tech sphere, some of the principles that have led so many people to adopt “slow food” or vegetarian lifestyles, or to minimize their carbon footprint, or to do business only with socially responsible companies.

Nor do I intend to preach. But if I can persuade even a few of you to join me, even in some small ways, I’ll be thrilled.

I know and like Dan, though one has to pause a bit: the PC is a Lenovo (made in China, home of a not-at-all oppressive government). He doesn’t specify who made the handset. I fear his quest is quixotic; even Taiwan-owned companies manufacture in China. So is China’s government better or worse than Google, Microsoft or Apple?

Miguel Helft tries hard, but this is largely a snoozer because people like Pichai provide answers that are so vague and distant – and won’t give a hard statistic for anything. This seems a relevant point, though:

Q: Messaging outside of email has become huge, as proven by things like WhatsApp, Snapchat and Facebook Messenger. Does Google need a play there to be competitive?

A: We think about it at two levels. We build platforms. We don’t expect Google as a first party service to provide all the answers. Part of the reason a platform is successful is because there are very very important things from other companies and other developers on top of the platform. Things like WhatsApp are a great example of success that others have had on Android, which we see as welcome innovation on the platform. It’s great for users, it’s great for our platform and I think it’s a virtuous cycle. In the aggregate, we also care about building great services for people. At that level, we view communications as an important area. But that doesn’t mean the answer is always a vertical service. We do have products like Hangouts which we will invest in and evolve. But we also care about the platform in these areas, how we evolve the platform so we support others to do these innovations as well. It’s a more nuanced answer. It’s a more complicated approach. I think we are comfortable with where we are.

Also covers Google+, Android, and China. Doesn’t have a truly interesting insight on any of them; you have to work it out from what isn’t said (he doesn’t emote about Android at Home; won’t talk about how enterprise is going).

Of course various blogs have filleted it for comments about Apple, but that’s a snooze too.

Marie-Christine Pygott is senior analyst at the research company:

For the large, non-European IT manufacturers, this has been bad news; where components are sourced in US dollars and revenues generated in euros, the devaluation has meant a significant increase in production costs and a strain on margins. Our distributor pricing data shows a 7% rise in the euro cost of components in the few months between July and December last year, despite a small decline in dollar terms. While prices did not go up to the same extent in real life, it is only a question of time before pricing shifts will show in our Channel data.

And show, it will. It is clear that IT vendors cannot just simply absorb the recent rise in costs.

List prices are already rising for PCs, it seems. That’s going to be a problem. Will smartphones be affected too?

The tuning of a CD with the CD Sound Improver is incredibly easy and takes barely a minute. The tungsten carbide blade is automatically set at the right angle during manufacture of the unit. A test CD is included in the delivery package. All following CDs are bevelled under exactly the same conditions. Shavings are removed via the vacuum cleaner link.

iA Writer (it’s a writing app) has been ported to Android, which was a learning experience for the team who’d previously written for iOS:

The core APIs offered by the Android SDK have proven to be very stable. Lollipop is at its core a completely new OS with a new VM philosophy, but when we updated our first device, the app just continued to work. That’s an amazing feat. Whenever the iOS people took a break from laughing at the stack of test devices, they were toiling away updating their app to work with one iOS upgrade after the other.

Whatever madness has flown into the Android core APIs, it’s there to stay. That can be seen as the reverse side of the coin. Hanging indents are not rendered correctly? Yep, since 2011 — it’s a feature by now. Want to handle a text larger than a few 1000 characters? Sorry, the guy who wrote the SpannableString Builder class is now enjoying early retirement in Malibu. The Android APIs are stable, but sometimes we’d have wished them to be less stubborn.

Via Russell Ivanovic, who cites this as evidence that (in his words) 2015 will be the year of Android. However, this doesn’t show anyone going Android-first; quite the opposite. It’s more that, having wrung the market pretty much dry on iOS and the Mac, they’re now targeting the Android market, which must have a high end who will want to use this.

It’ll be interesting to follow up with iA and see how sales/installs/piracy goes on Android and compares to iOS.