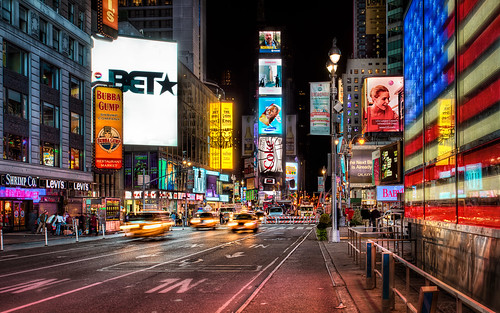 Hello and welcome to the Internet Of Things That Advertise To You! Photo by Justin in SD on Flickr.

A selection of 8 links for you. Contains heavy metals. I’m charlesarthur on Twitter. Observations and links welcome.

The first change comes from data. If we’re wearing watches, clever clothes and using sentient spoons, our heartbeat, moods, location, stress levels, calendars and search activity are all being recorded, shared and analyzed. If we circumvent for now the obvious privacy concerns, we’re armed with the best data we’ve ever had. Forget big data. When you have intimate data, little else seems important.

If we assume that programmatic is about buying against audiences, not channels, the next stage will be about buying people at a moment in time — buying micro-moments to serve hyper-relevant personal ads. If we go even further and assume that this information layer makes suggestions, the ads of the future may be promoted routes in our cars, notifications on our smartphones that it’s about to rain and an Uber is close, or money-off codes for holiday resorts when sensors on our smartphones detect we’re getting stressed.

Ugh. Ugh ugh ugh. Not Wanted On Voyage. (My take on the Internet of Things: security will be the real bugbear.)

Jeff John Roberts on how Katy Perry’s lawyer tried to block the 3D printing of left shark (who didn’t do what s/he oughta at the Super Bowl halftime show):

3D Left Shark is now available once again, along with some new 3D friends. In a blog post announcing his legal pushback, Sosa wrote:

I’m also resuming the sale of this 3D printed full color desk figurine at a different store front Etsy.com/shop/amznfx along with a couple other characters which include a drunk shark, pink drunk shark, and right shark.

So that’s where we stand. Your move, Katy.

Perry’s lawyer, Steve Plinio of Greenberg Traurig, did not immediately reply to a request for comment, but he appears to face an uphill swim.

As Sosa points out to Plinio in a public letter, the copyright claim suffers from two big flaws: 1) Perry doesn’t appear to own any rights in Left Shark; 2) there may not be any intellectual property rights at all, since costumes can’t usually be copyrighted.

Monetising this shark stuff seems promising. For a suitable amount, I’m prepared to vouch that you were the shark on the right, not the left.

Nat Brown looks back at his time at Microsoft, while looking around at what’s happening in smartphones:

We were helping key [Windows PC] OEMs prototype different special-purpose uses for the Windows operating system which could be sold with new high-volume consumer products under a lower licensing cost to hit the <$300 retail price point. (This effort and some of our prototyping was one contributor to the initial XBox.) I was fascinated to learn details about how much PC OEM’s had outsourced manufacturing (and some forms of the hard intellectual property design) to foreign white-label manufacturers. Some small players had literally outsourced everything but their logo, their sales staff, and their direct-mailing lists. It was clear even then that they were not differentiable and fully doomed. Others, like Dell, were still doing final customer-specific options assembly and industrial/mechanical (particularly pluggable component) design but were no longer designing much of their printed circuit boards (PCBs). The more I learned the more this seemed like a difficult-to-defend position without unique software capabilities to differentiate the clearly commodity hardware. PC OEM’s had no brand-exclusive content.

This has broader ramifications, as he explains, in the smartphone business.

As a number of news sites eliminate their comments sections altogether, Tablet, a daily online magazine of Jewish news and culture, is introducing a new policy charging its readers to comment on articles.

As of today, a reader visiting the nonprofit site that is otherwise paywall-free will have to pay at least $2 to leave a comment at the foot of any story. The move is not part of a plan to generate any significant revenue, but rather to try and change the tone of its comments section.

Tablet has set up commenting charges of $2 a day, $18 a month and $180 a year, because “the Internet, for all of its wonders, poses challenges to civilized and constructive discussion, allowing vocal—and, often, anonymous—minorities to drag it down with invective (and worse),” editor in chief Alana Newhouse wrote in a post published today.

Metafilter has had a version of this policy in place for years (a one-off charge, but similar). Certainly, though, it’s a clear implementation of my exposition of the economic theory around leaving comments: you have to make them valuable in some way to the commenter to attract the valuable commenters and deter the bad. Attaching monetary value to the act is smart, though of course it demarcates not by the value of the comment itself, but the disposable income of the commenter.

Canaccord Genuity’s Mike Walkley this morning raises his price target on shares of Apple to $145 from $135, writing that his review of market data suggests continued strength for the iPhone 6 upgrade cycle.

Walkley writes that his assessment of vendor data in smartphones suggests, whose shares he rates a Buy, captured 93% of industry profits in Q4.

Apple may have one third of all users of smartphones by the end of 2018, he reckons:

Walkley offers the following infographic to show Apple scooping up the vast majority of profit in mobile in Q4, while Samsung Electronics has a minority of profit and all others operate at no profit or at a negative margin.

It all tallies rather closely with my analysis of high-end Android profitability. Unsurprising, since we’re working off the same publicly available data.

Many in Europe are looking to the landmark Google antitrust case which [EC Competition Commissioner Margrethe] Vestager inherited from her predecessor Joaquín Almunia, who reopened the investigation during the final months of the Barroso II commission. The Danish official won’t be drawn on the details of the case, but instead issues a call for clarity. “Many concerns are raised about Google’s conduct, only some of which relate to competition policy,” she stresses.

“It is therefore very important to define clearly what is for competition policy and what may be more appropriately considered under other policy areas. The case before us is very important in today’s digital economy, and it attracts much interest. As such, we have a duty to fairly enforce our competition rules on the basis of the legal framework. What is critical for me therefore is to do so in an objective way and on the basis of the facts before us.”

Expect things to hot up on the Google-EC front over the next couple of months. There’s some murmuring about a Statement of Objections – a sort of EC version of “shots fired”.

Is audio quality a thing of the past? » TVTechnology:

Jim Anderson, multiple-Grammy winner and jazz recording engineer extraordinaire, was teaching the class on critical-listening that day, discussing frequency ranges of instruments, ear training, and getting the participating high school and college students to concentrate and understand what they were hearing. Toward the end of the class, Anderson would play samples of work he had recorded in the studio to compare original mixes against compressed versions of the same songs.

It was a truly glorious experience to hear a well-recorded, high-quality, uncompressed mix from a professional studio, crafted by a masterful engineer.

Everyone in the room listened intently as the versions were played and when Anderson asked the students which they preferred, I naturally assumed everyone would choose the original. To my utter horror, many preferred the lower bit-rate compressed version. While some of the compressed files sounded quite good, others were lacking upper harmonic content and had a collapsed soundfield compared to the original.

As I discussed this experience with other engineers present at the event we pondered whether the students had ever heard real instruments or whether they were so accustomed to modified and effected sounds that that was now their preference. It also left me wondering if anyone cares about quality anymore and whether it has been displaced by convenience.

Google could face legal action after Europe’s privacy watchdogs rejected the conclusions of an independent group of experts that largely backed the internet company’s implementation of the “right to be forgotten” law online.

Last year, Google convened a group of experts to advise it on how to apply last year’s ruling by Europe’s highest court, giving citizens the right to ask internet search engines to remove embarrassing results related to them.

The company’s “advisory council”, which is made up of eight independent experts and two Google executives, chief legal officer David Drummond and chairman Eric Schmidt, released its conclusions on Thursday. It said the company could continue its policy of stripping sensitive links only from European versions of its search engine, meaning that links expunged from Google’s French, German or British sites do not need be stripped from Google.com.

It’s fun to read the council members’ reactions to their own report: some seem to disagree with it quite a bit (which raises the question of quite how it got written as it has). Jimmy Wales in particular comes across as someone who hates the sort of nuance that the original ruling employs. (For my take on the different attitudes of the US and Europe to the ruling, see “the newest shibboleth”.)

I do like the suggestion that the ruling should be called “The right to be unlinked”. That’s a much better description than “forgotten”, because the key point about the ruling is that the original data remains exactly where it always was.