A selection of 10 links for you. Keep away from children. I’m charlesarthur on Twitter. Observations and links welcome.

Named Alternate Perspectives, the images present a series of panoramic views that curve around to form impossible circles.

Places depicted include the Empire State Building and Battery Park in New York, as well the region of Big Sur and the Redwood National Park in California.

As I wrongly retweeted (since deleted) a claim that one of these photographs was “a panorama produced by rolling down a hill”, it seems worth linking to this amazing set. Fabulous imagination required just to create them. (An example at the top of this post.)

despite initial appearances, both medical and consumer wearables share a few important goals.

Both kinds of wearables also need to justify being attached to our bodies. This seems pretty obvious for hearing aids, but it is just as true for consumer devices. A wearable that serves as only a slightly more convenient screen for your phone is hardly reason for the average person to spend hundreds of dollars. Instead, wearables need to offer a feature that works best when in close contact with your body, like measuring heart rate or offering haptic feedback.

Also, both types of wearables need to embed themselves seamlessly into our experiences. If a wearable obstructs your experience of the real world, or is a distraction, it’s likely to end up on a shelf instead of your wrist.

There are other lessons too.

TSMC argues that a former employee, Liang Mong-song, gave Samsung critical information to help it leapfrog TSMC in making its 14/16 nanometre gate process, breaking a non-compete agreement. In 2011 Liang had already been found guilty of breaching that condition:

The judge in Liang’s case clearly felt that the engineer had engaged in a bad-faith breach of his non-compete agreement given that he was forbidden to work for Samsung for an additional period of months, but the punishment was a slap on the wrist compared to the potential damage to TSMC’s core business. According to Maybank’s Kim Eng:

When comparing to a full-node migration, ie 20nm to 14nm at Samsung and Intel, TSMC’s half-node approach 16nm underperformed in cost reduction (by as much as 25% if not higher), power consumption and performance. In a very rare case, intel infamously highlighted the potential risks of TSMC’s 16nm undertaking during its Nov-13 investors’ day. After the initial round of evaluation, many customers “strongly encouraged” TSMC to enhance its 16nm technology offering.

In other words, not only did Liang possibly tap his knowledge of TSMC’s cutting-edge implementations inappropriately, he may have done so at the worst possible time (from TSMC’s perspective). Samsung has come out of nowhere to lead in foundry manufacturing, at least in the short term. Maybank’s latest report on TSMC cut the company from “Hold” to “Sell” on the strength of Samsung’s 14nm ramp. According to Liang himself, he left TSMC after he was passed over for promotion and felt his work was under-appreciated by his former employer.

Emoticons in texts can rack up huge bills » BBC News

The issue revolves around how the handset interprets the icons, known as emoticons or emojis.

In some cases, especially on older handsets, the emoticons are converted into MMS (multi-media service) messages, which can cost up to 40p each depending on the network.

MoneySavingExpert also found that, in some cases, users creating their own icons from full-stops, commas and brackets found they were converted into emoticons, running up the same charges.

“We have seen many complaints from our users who have racked up huge bills for sending what they thought were text messages,” Guy Anker, managing editor, told the BBC.

Paula Cochrane told the Daily Record that she had no idea that the emoticons were being charged as picture messages.

She complained to her provider EE and also plans to take her case to the Scottish ombudsman, an independent organisation that settles consumer complaints.

Amazing. But it’s the way that the carriers continue to rake in money; people on my Twitter feed have suffered this quite recently.

Fantastic reporting by Lance Ulanoff, who actually took the trouble to try to contact Shatner, who had been grumbling on Twitter after Engadget’s social media manager got verified:

By the time I spoke to Shatner late Monday, he was upset that media outlets were misrepresenting his words. I offered to interview him to set the record straight. He agreed to answer questions sent via a Google Doc. What follows is unexpurgated Shatner on the controversy, Twitter, verification, TVTag, and how he uses social media.

Mashable: You’re one of the more digitally savvy celebrities/actors of your generation. What draws you to a medium like Twitter?

WS: I’m from the old studio system where there were departments of people that spoke on your behalf, giving the studio’s version of what I liked, what I do, what I like to eat, etc. So Twitter and social media is liberating for someone like me. I can speak my mind, my thoughts, my ideas and usually they don’t get filtered.

That may be a good thing or a bad thing! 😉

Shatner emerges from this as someone who has really thought deeply about what “verification” can and should mean, understands what social media is about, and is a charming and, especially, smart person. Read it and reflect.

Samsung: watch what you say in front of our TVs, they’re sending your words to third parties » Boing Boing

Part of the Samsung Smart TV EULA: “Please be aware that if your spoken words include personal or other sensitive information, that information will be among the data captured and transmitted to a third party through your use of Voice Recognition.”

This is part of their speech-recognition tech, which uses third parties (whose privacy policies Samsung doesn’t make any representations about) to turn your words into text.

I dunno. It’s lovely for those who want to believe that we’re living in a world of telescreens (and indeed for the NSA, GCHQ etc this might fit) but it’s not really the “privacy” aspect that’s a concern. It’s the potential for hackers to turn on your microphone and/or camera and record it that I’d find concerning.

The EFF got the data about where and when the Oakland police department collected licence plate data (in a sort of passive surveillance; police cars capture the data using their cameras and the time and location is fed back). So what’s done with it?

We also filed a California Public Records Act request to obtain the Oakland Police Department’s crime data for the same period. Each white dot here indicates a recorded crime. It’s not much of a shocker that ALPR use doesn’t correlate very well with crime. For example, OPD did not use ALPR surveillance in the southeast part of Oakland nearly as much as in the north, west, and central parts of Oakland, even though there seems to be just as much crime. 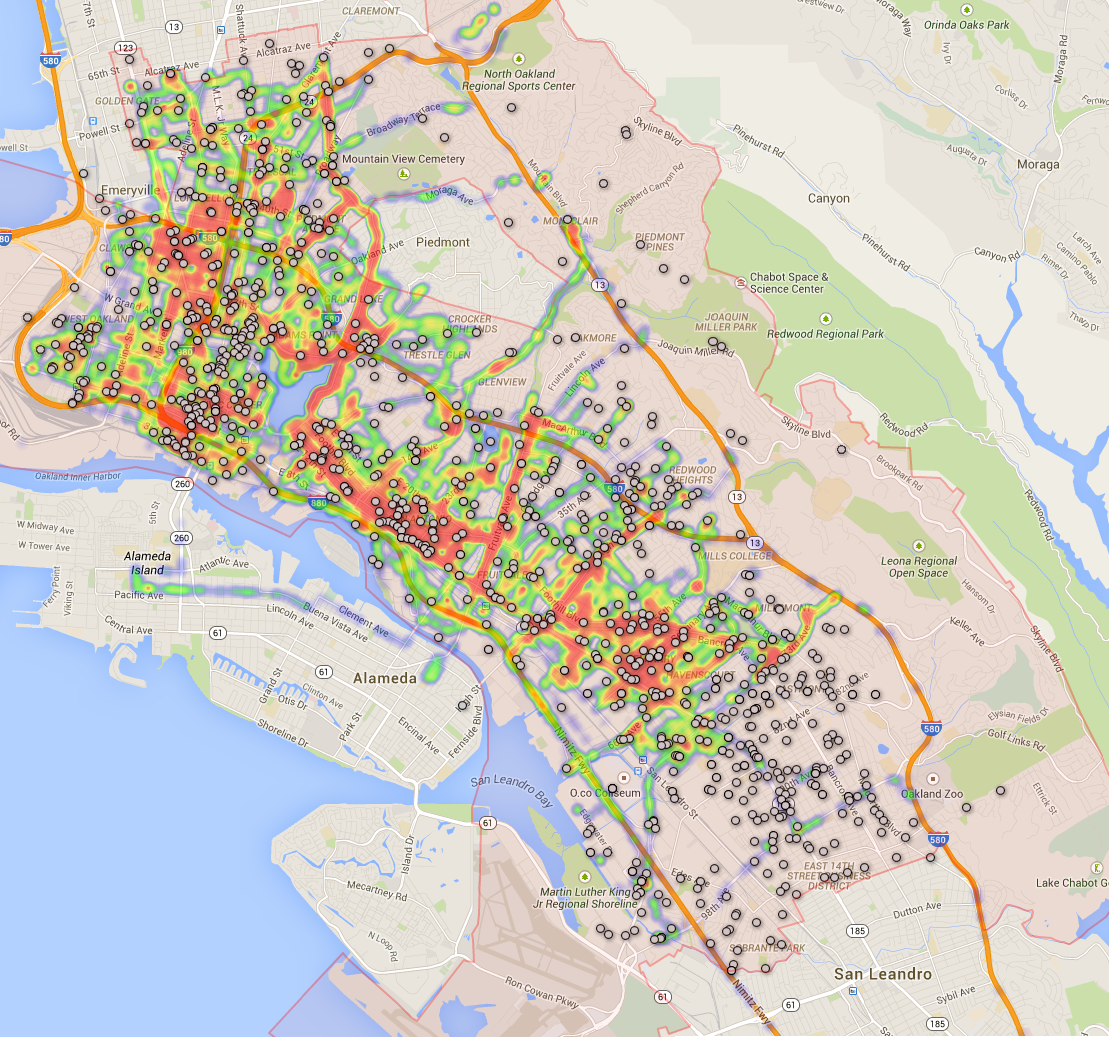 To see if perhaps OPD was just focusing its ALPR use in areas with high incidents of automobile-related crime, we decided to map only the auto-related crime: 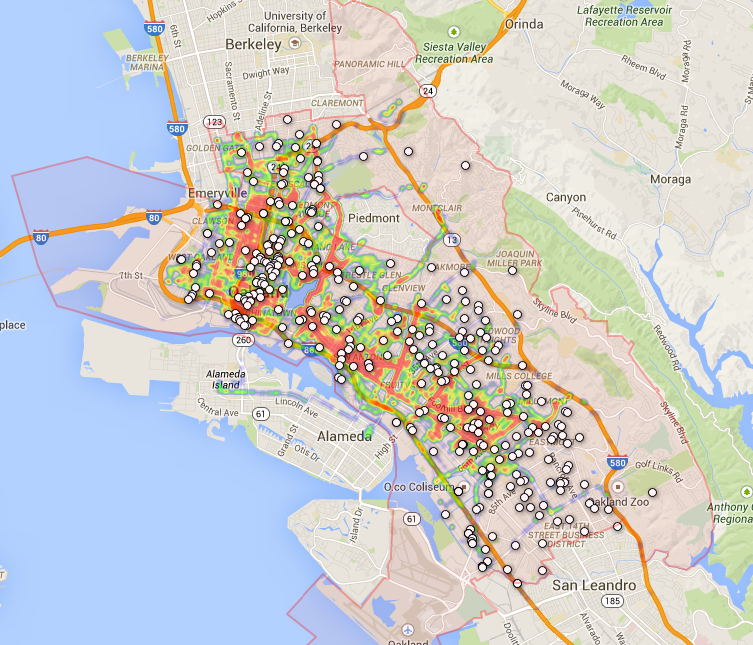 The result is the same—ALPRs are clearly not being used to deter automobile-related crimes.

The conclusion? A great big shrug. It seems like data being collected in order to collect data.

Could the HoloLens be Microsoft’s iMoment? » Gigaom

The HoloLens, unlike the iPod, is an independent device, albeit one that extends Microsoft’s Windows franchise.

So, perhaps the HoloLens is more akin to the iPhone, which shrunk down the capabilities of not the user interface of the PC. Indeed, Microsoft has positioned the HoloLens as “the next PC” although the smartphone has already claimed that mantle and Windows 8 showed that the company can get a little overzealous in labelling things “PCs.”

My first and last time at the Crunchies » Medium

At the Crunchies, comedian T.J. Miller, a star of the show “Silicon Valley” (which I watch and love), threw out a bunch of playful zingers in his opening act. But then at one point, he engaged with a woman (Gabi Holzwarth) a few rows in front of me by calling her a “bitch”. She responded increduously, “Did you just call me a bitch?” He then said, “Bitch, Asians aren’t supposed to be this entitled in the U.S. … Is this bitch from Palo Alto?” The audience laughed nervously. I was so uncomfortable I wanted to leave, but of course I couldn’t given that our award was coming up.

What a mess. Plenty of women didn’t enjoy it. Then again, it’s an awards ceremony at which Uber – you know, with a billion dollars in VC backing – won the award for “best startup”. And best hardware startup award winner was… GoPro, founded in 2002, which went public earlier this year.

Sure, it’s a networking event for Silicon Valley. But couldn’t they make it less embarrassing somehow?

The world’s email encryption software relies on one guy, who is going broke » Huffington Post

The man who built the free email encryption software used by whistleblower Edward Snowden, as well as hundreds of thousands of journalists, dissidents and security-minded people around the world, is running out of money to keep his project alive.

Werner Koch wrote the software, known as Gnu Privacy Guard, in 1997, and since then has been almost single-handedly keeping it alive with patches and updates from his home in Erkrath, Germany. Now 53, he is running out of money and patience with being underfunded.

“I’m too idealistic,” he told me in an interview at a hacker convention in Germany in December. “In early 2013 I was really about to give it all up and take a straight job.” But then the Snowden news broke, and “I realized this was not the time to cancel.”