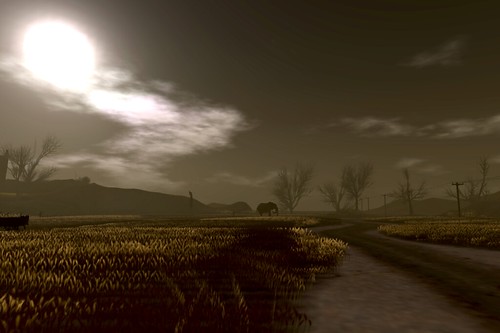 Where’s Apple in this virtual reality landscape? No iPhones there. A screenshot from the Drax files Oculus Rift view by draxtor on Flickr.

A selection of 8 links for you. Can be swapped for Green Shield stamps at participating stores. I’m charlesarthur on Twitter. Observations and links welcome.

By all accounts, it sounds like augmented reality devices like these are “the next big thing.” And at this point, Microsoft, Google, Facebook, Samsung, and others have invested hundreds of millions — even billions — of dollars into these new virtual and augmented reality experiences.

Apple, meanwhile, is nowhere to be found.

Oh no! And already millions– well, thousands– ok, hundreds.. er, dozens of people are using Oculus Rift, and Google has retreated on Google Glass. So where the hell is Apple in this.. race? Smith continues:

Last June, I wrote about how Apple’s patent for “interactive holograms” was one I wanted to see become a reality. Filed in October 2012 but published in April 2014, Apple had created a system that allows you to interact with projected images that appear to hang in mid-air, even letting you control and manipulate those virtual objects with the swipes and gestures iOS users are used to (pinch to zoom, etc.)

It’s not too late for Apple to use this patent.

Not too late? If anything, it’s way too early for Apple to use it. It seems people don’t learn the lessons of Google Wallet v Apple Pay, or Palm and RIM v the iPhone: throwing technology out there isn’t enough; you need the business and experience to fit in too.

Much more detail in the article, but the five brands (or sub-brands) are:
• Yu Yureka (by Micromax)
• Shenqi (by Lenovo)
• Ivvi (by Coolpad)
• OnePlus (born out of Oppo)
• Himax.

DNS issues in China between 7am and 9am GMT left millions of domains inaccessible. Two-thirds of China’s DNS (Domain Name System) infrastructure was blighted by the incident, which stemmed from a cache poisoning attack.

Chinese netizens were left unable to visit websites or use social media and instant messaging services as a result of the screw-up, the Hong Kong-based South China Morning Post reports.

The snafu, which affected China’s root servers, meant all queries resolve to the IP address 65.49.2.178. A fix was implemented around two hours after the snag first surfaced.

Put like that, it sounds like “yeah, yeah”. But when it happens to you, as it did to Craig Hockenberry, it’s very different.

SkyMall produced an in-flight magazine selling “Innovations”-style products (as in, stupid, useless, and yet able to make you go “ooh!”), but has now filed for bankruptcy. David Holmes had the brilliant idea of making this quiz:

judging by some of the products that caught the media’s attention at CES this year, I’m not sure SkyMall and Silicon Valley are so far off in their passion for absurdity. The “Rollkers” at CES? Sounds a lot like these OrbitWheels sold through SkyMall. Or what about the “gTar”? Is it so different than the All-Star Guitar, which is basically a fake guitar you plug into an iPad? Can you even tell which one is from CES and which one is a SkyMall product?

I didn’t even try to score myself because I’d put them all in both category. But the fact that Holmes can confuse us at all shows what a microcosm of crap CES has become.

Keating is a successful cellist whose videos have a respectable, if not mind-boggling, number of views:

My Google Youtube rep contacted me the other day. They were nice and took time to explain everything clearly to me, but the message was firm: I have to decide. I need to sign on to the new Youtube music services agreement or I will have my Youtube channel blocked.

This new music service agreement covers my Content ID account and it includes mandatory participation in Youtube’s new subscription streaming service, called Music Key, along with all that participation entails. Here are some of the terms I have problems with:

Must have ads, must be in 320kbps (nonsensical), can’t release elsewhere first, must allow all catalog in free and paid music service, five-year contract. Non-optional. Keating wants control; YouTube doesn’t want her to have control. And there seem to be strange goings-on in search:

Here is something weird. Until yesterday a search for “Zoe Keating” would yield a Google Knowledge Graph box on the right with all my info, including links to listen to my music. It always bugged me that those links were only to Google Play, Rhapsody and Spotify, all services which have hardly any of my music in them. If the metadata about me is really pure, why not link to the only services that actually have all my music? i.e. Bandcamp, SoundCloud and iTunes? I know the links were there yesterday because I searched to get the list for this blog. As of today, there are no music links whatsoever. Ideas?

Her sad conclusion: “The revolution has been corporatized.” And now read on..

Is Google playing fair with Android developers? » The Information

Transcript of long and really interesting interviews with various developers from The Information’s “Next Phase of Android” event held recently. Lots to consider, but I was struck by this:

Tom Moss, CEO of Nextbit: The next phase of Android is that people have finally shifted away from asking, “Is there going to be a third mobile platform?” or, “My friends all use iOS, so is Android a thing?” And now you can think, if you can’t compete with Android, you can compete with Google by co-opting Android. That’s what Kirt is doing. In my own game theory, I was thinking, “God, I hope Microsoft doesn’t adopt Android and come out with a bunch of services to grab market share.” It’s not the OS wars any more. It’s the services.

Kirt McMaster [CEO of Cyanogen]: This notion of a creating a Windows Phone or a Facebook phone is absurd. All of these guys have failed. We’re able to build on top of Android and make Android better. Now we’re opening up Android and partnering with everybody you can imagine. Google is running the table, and nobody likes that. We’ve emerged as the white horse that opens the entire platform up. We think this is where the innovation is going to happen.

(The piece is paywalled.) The idea that “Google is running the table, and nobody likes that” might sound surprising. Moss’s fear about Microsoft and services sounds like Nokia X – which still seems to me a tolerable idea, except that Google would make AOSP an unusable husk if Microsoft really made headway with it.

No, iPhones weren’t stolen and then used for unauthorized purchases, TouchID was not compromised, Credentials weren’t ripped out of Apple’s tamper proof secure element – nor the much feared but rarely attempted MITM attacks (capture and relay an NFC transmission at a different terminal). Instead fraudsters bought stolen consumer identities complete with credit card information, and convinced both software and manual checks that they were indeed a legitimate customer.

Partly, that’s because banks didn’t have very good checks (called the “Yellow Path” – is it an Oz reference?) to verify identity when someone wanted to enter a credit card onto a phone.

Apple bears some of the responsibility though:

In fact initially “Yellow Path” was marked optional for card issuers by Apple – which meant that only a couple of Issuers directed much focus at it. Apple reversed its decision and made it mandatory less than a month before launch – which led to issuers scrambling to build and provide this support. Why any bank would consider this optional is beyond me.

Either way, Card issuer implementations of the Apple Pay Yellow Path have proved to be inadequate.

It’s the whole insecure US credit system in microcosm.

Danny Sullivan on how Firefox users visiting Google are being encouraged to switch away from Yahoo:

I figured it was inevitable Google would do this, if the Firefox-Yahoo deal really did seem to be having an impact. Even the loss of a little share might be enough to scare investors. Certainly, I’ve taken enough calls from various press outlets wondering if the deal and subsequent share loss meant a big problem for Google.

My response has always been that if Google was worried, it could and would fight back in this type of manner. Now it is, and I suspect it will regain some of that share lost to Yahoo.

I also suspect Yahoo won’t gain much more search share than it has, because with the Firefox deal fully rolled out, it’s effectively hit a high water mark for all that particular channel is likely to produce.

“People can switch away any time.”