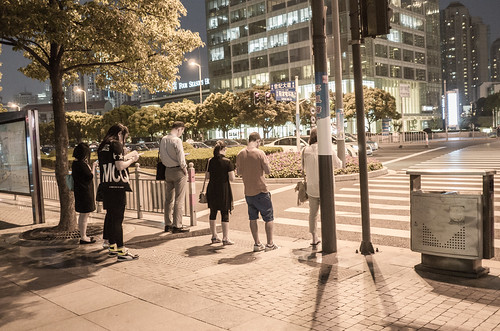 Lots of this, but hard to sell more? Photo by japp1967 on Flickr.

The year ahead will be a pivotal one for smartphone makers in China, where around a dozen domestic manufacturers are all vying for a piece of a market that is the world’s largest but also one that’s contracting due to saturation. Leading players include Huawei, Lenovo , ZTE and Xioami, all of which are well funded and have the resources to survive the slowdown. But smaller, newer names like Oppo, OnePlus and Smartisan may not be so lucky, and I expect that 2 or 3 will be forced to close before 2015 ends.

Intel Corp, the largest maker of chips that run personal computers, forecast first-quarter sales that may fall short of analysts’ estimates, sparking concern that the PC industry is headed for a steeper decline.

Revenue will be $13.7bn, plus or minus $500m, the company said today in a statement. On average, analysts had estimated sales of $13.8bn, according to data compiled by Bloomberg.

While corporate demand for new machines helped moderate the PC market’s deterioration last year, the industry has failed to attract enough consumers with new slim laptops designed to compete with tablets and smartphones. Users have learned to live without the keyboards and larger screens of the computers powered by Intel’s processors, said Gus Richard, an analyst at Northland Securities Inc.

“Why would the consumer ever want to buy a PC?” said Richard, who has the equivalent of a hold rating on Intel stock. “The first thing that people do in the morning is check their smartphones.”

Incomes and revenues up, but outlook down.

Apple has gone from tens of millions of Mac users to hundreds of millions of iPhone customers and to a billion iOS devices sold. Whereas Apple once served a fairly small number of specific niches, it now serves almost every kind of customer imaginable: from the power user to the first time smartphone owner, from the wealthy American to the rising Chinese middle class. It’s also increasingly being adopted in the enterprise market and the IBM deal will only accelerate this trend. To be sure, Apple still isn’t universal in its appeal, especially since its devices tend to be costlier than those from other manufacturers, particularly in markets where phones aren’t heavily subsidized. But Apple’s customer base is becoming ever more diverse over time.

The other thing that’s happening is Apple’s customer base is maturing. I don’t mean it’s getting older (though that is almost certainly the case), but an increasing proportion of its customer base is using its third, fourth or fifth Apple device. These customers are becoming accustomed to a certain way of doing things, becoming “trained” in the Apple way of delivering tightly coupled software and hardware. Their expectations of how Apple will act, therefore, start to harden over time, leading to less flexibility in response to major changes in iOS and OS X.

As he explains, that has deeper – perhaps Microsoft-like – implications.

An infographic (apologies) but packed full of fascinating detail about the sales and revenues by country and platform for the twisty mindbending game. For all those saying it was “too short”, only 50% completed it, according to the data.

The data also provides an interesting comparison with these estimates of its sales.

RadioShack Corp. is preparing to file for bankruptcy protection as early as next month, people familiar with the matter said, following a sputtering turnaround effort that left the electronics chain short on cash.

A filing could come in the first week of February, one of the people said. The Fort Worth, Texas, company has reached out to potential lenders who could help fund its operations during the process, another person said.

Might get sold to a private equity company. Cumulative losses over the past seven quarters: $770m or so. Electronics is tough; started in the 1920s but couldn’t adapt to the web age.

Sony announces that it will close all stores in Canada » Androidheadlines.com

As Sony struggles to reinvent itself, they made a rather surprising announcement – Sony is closing all fourteen of its Sony Stores in Canada over the next two months. Toronto had the heaviest concentration with five Sony Stores and one Sony Style Store. There are three Sony Stores in Vancouver, two in Calgary, and just one in Ottawa, Edmonton, Montreal and Quebec City. The employees were informed in an announcement today and then released a news statement to The Citizen.

Toronto had six Sony stores?! If you’ve got a good memory you might remember that in February 2014 Sony said it would shut 20 of its 31 US stores by the end of 2014. Wonder how those 11 are doing.

Shares of BlackBerry fell more than 16% in premarket trade Thursday after the company denied reports that it was approached by Samsung Electronics regarding a potential $7.5bn takeover. The stock was up as much as 28% on Wednesday after Reuters reported that the two had been in talks about a possible deal. Reuters late Wednesday said Samsung approached BlackBerry with a buyout price range of $13.35 to $15.49 a share. Samsung reportedly called the report “groundless.” BlackBerry in a post on its website said it has not engaged with discussions with Samsung with respect to “any possible offer to purchase BlackBerry.”

Hey ho. Still a lot of road to go though. Patents? QNX? Corporate accounts? Samsung could want all or part of them. Then again, BlackBerry has been “sold” about 10 times in the past two years by market rumours.

Paul Thurrott is moving on. But the site will remain:

What changed over time is just the usual work-related stuff. Penton purchased Duke Publishing several months after I signed on, in August 2000, and over time the impact of being part of a big company weighed ever more heavily on me. For many years, I was insulated from this as the Duke team in Colorado effectively sheltered me. But as my friends and coworkers were in some cases promoted within “big Penton” (as I thought of it) or were laid off—hey, it’s a big company with priorities that extend far beyond my little group—the layers between me and the corporation around me grew thin and then disappeared.

This isn’t a dig at Penton. It’s a great company, and was a wonderful benefactor for all these years. And I’m friends with—and care deeply for—many people at Penton. I’m just not fit for corporate life. I need to be on my own or with a smaller team to thrive, and over the course of the past I year I felt increasingly that it was time to move on. I do so with a deep sense of regret because I know I’m letting down some people whom I care for, and because I’m leaving behind the legacy of this site.

But I’m also hopeful for the future. I plan to continue doing what I do at thurrott.com and I’ve partnered with some new friends to make that happen.

Everyone’s going individual, have you noticed? Also, everyone seems to be doing it with email newsletters. (Pause for thought.)

Glass is moving from the Google X research lab to be a stand-alone unit led by Ivy Ross. Ms. Ross and her team will report to Tony Fadell, a former Apple executive who heads Nest Labs, the smart-home device company Google acquired for $3.2 billion in February 2014. Mr. Fadell will still run Nest, but he also will oversee Glass and provide strategic guidance to Ms. Ross.

Google will stop selling the initial version of Glass to individuals through its Explorer program after Jan. 19. Google will still sell Glass to companies and developers for work applications.

Google plans to release a new version of Glass in 2015, but it hasn’t been more specific about timing.

The changes usher in a new strategy for Glass that will shun large, public tests of hardware prototypes in favor of the approach used by Apple and Nest, which develop consumer gadgets in secret and release them as fully finished products.

Does that mean we’re not going to hear any more about that bloody self-driving car and the diabetes-diagnosing contact lenses until they’re actually ready, rather than five or more years from ready?