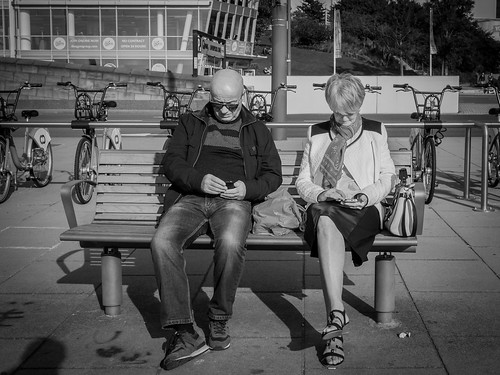 Is the pace of change really such a shock? >> plasticbag.org

Tom Coates, musing on his post-BBC repose (where there were warnings of the “sheer pace of change” in technology):

five years from now there will clearly be more bottom-up media, just as there are more weblogs now than five years ago, but I’d be surprised if it had really eradicated any major media outlets. These changes are happening, they’re definitely happening, but they’re happening at a reasonable, comprehendible pace. There are opportunities, of course, and you have to be fast to be the first mover, but you don’t die if you’re not the first mover – you only die if you don’t adapt.

Written in April… 2006. Worth reading now because it’s still completely true (and doesn’t apply only to the BBC, of course).

Geoffrey Commander doesn’t fit the standard Anonymous profile. He’s a successful musician, earning his living by playing guitar for ELO and Elton John. At 66, he’s also a good deal older than your average hacktivist. But according to the indictment handed down last October, Commander was one of a group of 13 defendants who disrupted the websites of Bank of America, Mastercard, and a number of anti-piracy groups as part of Anonymous’s Operation Payback. Commander and his 12 co-defendants haven’t had as high a profile as the PayPal 13, who were brought before court around the same time, but they’re charged with the same crime: using a freely available web tool called the Low Orbit Ion Cannon to perform a denial-of-service attack.

Peering into the minds of the 4.3 billion unconnected >> TechCrunch

Hassan Baig of ClubInternet, which tries to “connect the unconnected”:

The test subject in the GIF above was tasked with moving between various pages of the app launcher. Easy right? In multiple trials, she always attempted a mix of tapping and swiping to move between the pages, never definitively settling on swiping (which is the correct action for the said task). Her mental model for gesture control on mobile devices remained suspect throughout the usability test.

Overall, we’ve found that almost all of the unconnected muddle through when given a mobile device to use, struggling with understanding when to swipe, tap, double tap or pinch. A possible reason could be that feature phones, TV and radio — the three most widely used technologies among the unconnected — do not exactly nurture a mental model for gesture control in any meaningful way.

We’ve also found that repetitive smartphone use does alleviate this problem somewhat, but very gradually. Overall, in no way is using a smartphone as intuitive for the unconnected as it felt for us — the connected — back in 2007 when we experienced our first such device.

In defense of Uber in India >> Medium

India has had a string of similar tragic incidents [to the one where an Uber driver is accused of rape, and had a past sexual assault record] for many years. When I was at Microsoft Hyderabad in 2005, we started having security guards accompany women home late at night after a string of incidents where women in tech companies were assaulted by their shuttle drivers. As I was writing this post, I found more incidents as recent as 2013. This has been happening for a long time now and India has been grappling with some hard social/cultural questions on why it has been unable to stop this. This is why a lot of us tell women traveling to India to be much more aware of their surroundings — the social calculus you employ when you do something as trivial as jumping into a cab or asking a stranger for a favor isn’t the same in every part of the world.

The idea of Uber doing background checks and “filtering out” this driver with an arrest record is laughable for anyone who has dealt with government records in India. First, there is no reliable way to run a check on someone in most parts of the world and second, even if they did, a small bribe in the right place will fix most records.

A side anecdote on how such records work. Most of my school friends didn’t have to go to the Indian equivalent of the DMV to get a license when they hit the right age — they just got a “friend” to get it for them for around $10. I remember being grumpy with my dad when he made me actually take the test. Not because my dad had some moral high ground but more because he didn’t want to spend the money on a bribe.

Despite its problems, Uber is still the safest way to order a taxi >> Business Insider

There’s also no cash involved with Uber, as payments take place through the app. And unlike taxis, you can’t hail an Uber off the street. While hailing a taxi is convenient, it opens up passengers to unlicensed taxis operating illegally. And of course, even if you get a taxi from an official rank, you don’t know who the person is at the wheel.

Uber also has a system where passengers and drivers can rate and — if need be — identify each other. The company is notoriously vigilant when it comes to its driver ratings. It has been speculated that any driver that dips below a 4.7 rating out of 5 are deactivated by the company.

In the normal course of business, drivers and riders only know each others’ first names. Riders get to know the cars, photos and license plates of their drivers, too. It’s all automatically recorded in the app. If a dispute arises (or an assault) Uber has a complete record of who was in the car, where the car went, and how long the journey was. That’s much more identifying info than a taxi ride generates.

He acknowledges that in the Delhi case “something there obviously went wrong”. But his general point is well-made.

Three people who have been approached by Vessel [a startup intending to launch a subscription video service, with $75m of venture backing] say the company wants artists to post videos exclusively on its service for up to three days, part of its plan to offer subscribers an advance look at popular short-form video. One of those people said Vessel offered to pay an advance based on how well the creator’s videos have performed on YouTube.

Vessel also has told creators that its subscription service will provide a nicer neighborhood for their videos than YouTube, where videos may run next to edgy or low-budget fare, according to people who have heard the company’s pitch.

The moves show how emerging competitors are forcing Google to rethink YouTube’s traditional positioning as a “platform” where video creators can upload what they like. They still do, but YouTube now must put more skin in the game, investing to keep top stars on the site. Creators and agents say the service is acting with rare urgency.

The internet is full of niches, but some of those niches are gigantic.

a new report from South Korean online publication Naver says that Samsung is also working on a faster LTE chip of its own, which could be used in one version of next year’s Galaxy S6.

According to the report, Samsung is developing a tri-band LTE Cat. 10 modem for its Exynos chips that would support theoretical data speeds of up to 450Mbps, or significantly higher than the maximum 300Mbps speed of the current LTE Cat. 6 standard.

Apparently, Samsung is interested in making its own LTE modem chips, rather than relying on competing products. Qualcomm also has a similar modem for the Snapdragon 810 System on Chip that could be used in a different flavor of the Galaxy S6.

On the other hand, no matter how fast these LTE modem might be, they’re still useless as long as carriers don’t also support the faster data transfers.

Like any general, Samsung is still fighting the last war – in this case, the specs war – with the same weapons. Remember Smart Scroll, Air Gesture, and the like?

Turns out that it was just a baseless rumor, which has now been shot down by Qualcomm’s Senior Director of Public Relations, Jon Carvill. While Carvill refused to comment on the delay or the rumor, he did say that the development on the Snapdragon 810 chip is going as per schedule.

“I can tell you that everything with Snapdragon 810 remains on track and we expect commercial devices to be available in 1H 2015,” said Carvill.

By far the best Android news site I’ve come across (for its ability to get exclusives, write interesting reviews and dig into new software). This year’s gift guide has that extra something; see if you can spot it.

By 2018, more than 50% of users will use a tablet or smartphone first for all online activities >> Gartner

Mobile devices are increasingly becoming the first go-to device for communications and content consumption, according to Gartner, Inc. In the emerging economies, users are adopting smartphones as their exclusive mobile devices while in developed economies, multi-device households are becoming the norm, with tablets growing at the fastest rate of any computing device. As such, Gartner predicts that, by 2018, more than 50% of users will go to a tablet or smartphone first for all online activities.

“The use pattern that has emerged for nearly all consumers, based on device accessibility, is the smartphone first as a device that is carried when mobile, followed by the tablet that is used for longer sessions, with the PC increasingly reserved for more complex tasks,” said Van Baker, research vice president. “This behaviour will adapt to incorporate wearables as they become widely available for users. As voice, gesture and other modalities grow in popularity with consumers, and as content consumption tasks outweigh content creation tasks, this will further move users away from the PC.”

Let’s hope they’re doing better than the first-time users above.

The thing to really pay attention to in this justifiedly celebratory blogpost is the email from the boss of UsTwo (which built the game) exhorting the team, and setting out clear goals – all starting “must…” – to achieve. All achievable, but all challenging. Great leadership and great teamwork.

A former Apple executive who sold some of the iPhone maker’s secrets to suppliers will serve a year in prison and repay $4.5m for his crimes.

Paul S. Devine was sentenced in San Jose federal court earlier this week, more than three years after he pleaded guilty to wire fraud, conspiracy and money laundering. The US Attorney’s office announced Devine’s penalty Friday, but declined to explain the reason for the lengthy delay in his sentencing.

Devine faced up to 20 years in prison.

The scheme funnelled millions in kickbacks to Devine for passing along confidential information to Apple suppliers and manufacturers who used the secrets to negotiate more favourable deals.

Considering this. The suppliers got better deals – so they were paid more by Apple? So either Apple’s profit was reduced, or it had to push up prices. Devine was a global supply manager at Apple between 2005 and 2010.