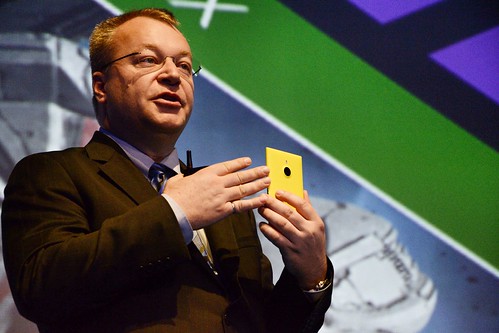 I’m continually fascinated by the reactions engendered by Stephen Elop. He is blamed, variously, for

Possibly he has kicked a cat at some point too, which would never do.

Latest in these is Om Malik’s furious outpouring, in which he says

The very fact that a middling executive could be brought on for a turnaround of Nokia, and compete with the iPhone/Android onslaught with absolutely zero turnaround experience was one of those decisions that has confounded me and I continue to blame the Nokia board for shooting itself in the head. On his watch, Nokia essentially eviscerated. Android might have been a better decision, but he went with Windows Mobile. The stock tanked, market share shrank and like proverbial Lord Mountbatten he was part of the last days of the Nokia Raj.

(Minor fact point – he went with Windows Phone, not Mobile, which was dead by then.)

Let’s set the scene first. Nokia ruled the smartphone business in 2009, but that business was tiny compared to what it is now. More important, the ground was shifting under Nokia’s feet. The arrival of the iPhone, and more importantly Android, and – more importantly than both – of their respective app stores meant that the whole smartphone game was changing. Nokia didn’t have capacitative multi-touch, and didn’t grasp the potential for “a computer in your pocket”, even at the iPhone’s high price.

So by mid-2010 Nokia was in deep trouble, which many of its board had realised for some time. That’s why they sacked their then chief executive and headhunted a new one. Stories have emerged that Elop was their second choice – after an unnamed American exec at a big company (Tim Cook?).

What were Elop’s choices? In order: stick with Symbian; go with Maemo; go with Android; fork Android; go with Windows Phone; try to license something else.

• Symbian was already a dead dog (see my review of its flagship N8).

• Maemo simply wasn’t ready, and would have had to try to build an ecosystem from scratch with virtually no developer support – which Nokia would be unlikely to mobilise on its own.

• Google Android. I asked Elop about this last year (at the launch of the Lumia 1020 – a phone that despite its amazing camera has sold so poorly it might as well have been hand-delivered.) He said:

“I’m very happy with the decision we made,” he said. “What we were worried about a couple of years ago was the very high risk that one hardware manufacturer could come to dominate Android. We had a suspicion of who it might be, because of the resources available, the vertical integration, and we were respectful of the fact that we were quite late in making that decision. Many others were in that space already.

“Now fast forward to today and examine the Android ecosystem, and there’s a lot of good devices from many different companies, but one company has essentially now become the dominant player.”

Of course, the manufacturer was (and is, for now) Samsung, which the advantage of component manufacture. I believe Elop was also tipped off by then-CEO Steve Ballmer that Microsoft would begin patent lawsuits against Android manufacturers to generate revenue and raise their costs, and hence make Windows Phone no less attractive.

What Ballmer overlooked was that the network effect which worked so well for Microsoft in the 1990s, attracting developers! Developers! Developers! to the Windows desktop platform would work against it in mobile, where iOS and Android were attracting people who thus pushed Windows Phone – a new, still-developing platform in 2010/2011 – to the back of their development queue. (And Windows Mobile had to die; it was unsuitable for the modern world, just as Symbian was. Microsoft wrote Windows Phone in record time, but it was still too late.)

• Forked Android. I’m unsure whether Elop looked at the idea of forking Android (that is, using AOSP and adding a la carte services). Nokia had a map company; for search it could have gone to Microsoft, which was (still is) desperate to get mobile search share for Bing; and then it could have looked around for other providers for other services.

The big question in such a scenario would be apps, of course, and the question of what Google might do with the Android code that made up AOSP in the future. But I don’t think such considerations occupied peoples’ minds very much. Smartphone sales in China were still a tiny business, comparatively, because they hadn’t quite achieved economies of scale.

I think that the “what if Nokia had picked up AOSP?” question is the really interesting one – so if anyone knows if that option was examined (I forgot to ask it of Elop) then do get in touch.

Now he’s back at Microsoft, Elop is chopping tons of jobs. I wonder if this is entirely his idea. Ballmer very much wanted to buy Nokia’s mobile business; Elop would have been keen to sell.

But I think Satya Nadella is shifting Microsoft away from devices towards services, and towards platforms.

That, however, is why I find the killing off of the Nokia X puzzling. It’s “Nokia on forked/AOSP Android”. I’ve previously said that Microsoft should just give up on Windows Phone, and adopt AOSP, because it has all the pieces in place. Nokia actually did do that – but now it’s dead.

This just makes no sense. If Microsoft is a platform company (as evidenced by Nadella’s first public performance being to unveil Office for iPad, then it should be building and enabling platforms.

Now, Windows Phone is definitely a platform. The trouble is, it’s not a very big platform. It’s as big, in terms of users, as Mac OSX – about 70m users worldwide.

But there’s one key difference: OSX has captured top-end users, willing to splash out around $1,000 on computers which cost much more than the average. By contrast, Windows Phone’s best-selling phone is the Lumia 520, a low-end pay-as-you-go phone that has done well in terms of numbers but really hasn’t captured any noticeable user revenue. (In fact, Microsoft generates more revenue from Android patent licences than Windows Phone.)

Further, the desktop/laptop installed base is smaller than the smartphone installed base (about 1.5bn v 2bn), meaning that Apple has a (slightly) bigger share there. Windows Phone is not a success.

Android, however, is a success. And tons of Chinese companies have made AOSP a success – using it to build platforms where they offer search and maps (Baidu) and e-commerce (WeChat etc). Lots of developers are comfortable writing apps for AOSP and Android.

Microsoft though is ditching Nokia X (which phones will be sidegraded to Windows Phone – that’s going to be interesting for the users) – abandoning the chance to build its own native platform and exploit Google’s power in the market to hoist itself upwards. Instead, it’s going to plough on with Windows Phone.

No USP, no reason to be

That’s hopeless. Windows Phone has no USP. Consider: BlackBerry has its enterprise-grade security. (Governments and defenceniks still love it.) The iPhone has the Apple brand and user experience. Android has any size, shape and price you want. Windows Phone has… no native YouTube app? Fewer apps overall? It lacks many of the enterprise features that iOS 7 has (and that will increase when iOS 8 arrives), so what is the reason for getting it?

I really don’t know what Microsoft’s mobile strategy is any more. It’s clearly making the same mistake it keeps making: trying to fight people on the ground where they’re strongest. That worked once – over browsers. But Microsoft had a big advantage then: it had Windows. If browsers had been a “fair” fight, who knows if Netscape or Internet Explorer would have won.

John Kirk makes this point very well in “Microsoft is the very antithesis of strategy“: Microsoft keeps sieging cities when it should be diverting rivers. (Want the people to come out of that city they’re holed up in? Cut off their water, or alternatively drown them.)

In search, Microsoft tried to take on Google head-on, five years late, playing catch-up on basic technology and infrastructure, instead of finding other ways to exploit search. Google keeps diverting rivers – Chromebooks have forced Windows licence prices down; Google Docs has forced cuts in the price of Office; ad-supported email has destroyed the paid-for Hotmail model (it used to exist, honest). Google diverts rivers. But Microsoft can’t see a city – mobile, search, browsing – without wanting to lay siege to it.

Mobile is just more of the same – and just when it looked like it had a chance to make the water flow the way it wanted with the Nokia X, Microsoft is killing it.

Don’t expect things to improve. Maybe someone though could ask Stephen Elop if he ever considered whether Nokia could have forked Android (or built on AOSP) rather than going with Windows Phone.

(Since you’re wondering, I’m on holiday. But I thought this might be fun to do.)

1 thought on “What if… Nokia, Microsoft, Elop, Nokia X and sidegrading”