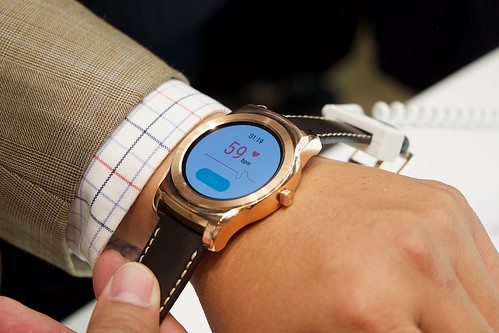 Got an LG Watch Urbane? Congratulations – you’re part of a pretty exclusive club. Photo by Janitors on Flickr.

Back in February I tried to estimate how many Android Wear devices were activated in 2014, following Canalys saying that 720,000 had shipped that year.

The figure I got, based on the page on Google Play, where one can track not just downloads but also comments and average rating for the Android Wear app (which you need to control your shiny new Android Wear device), was 700,000.

Progress, or the lack of it

OK. So what about progress since then? I’ve kept noting the progress of the number of downloads, and the number of comments, on the Google Play page, helped from time to time by the Internet Archive (it’s wonderful. Donate).

My previous estimate worked on the basis that the number of comments was proportional to the number of downloads. I don’t see any reason to change that assumption.

So how does it look now? The number of comments keeps going up:

(One point to note: the average review score has been trending down steadily. You would expect this for a new technology: the keen people who forgive anything are first in, and are followed by those who got it as a gift, or an experiment, or whatever. Notably, some of the recent low ratings come from people complaining about updates; that would suggest that the installs/comments ratio is actually falling.)

Whichever, the precise value of the average review has fallen from a comfortable 4.83 (out of 5) to dip to 3.98 at the end of October, recovering to 4.00 last week.

And now we try to fit the number of installs – using the points that we have, which isn’t a lot – to that graph, assuming downloads are directly proportional to comments.

So I’ve tried to fit the graph as best I can. And this is what I get:

Fitting known waypoints to the number of comments suggests that 1.9m Android Wear devices have been sold

That’s the figure I get: 1.9m downloads in total, suggesting that since February there have been a total of 1.2m more installations of Android Wear.

So again we ask: is that bad or good? There are now 1.4bn Android devices in use, according to Sundar Pichai. Only those running Android 4.3 upwards can use Android Wear, which means we’re potentially talking about 67.8% of devices according to the very latest figures from the Android Dashboard. (That’s up substantially from 47.6% back in February.)

Now we have a potential addressable market for Android Wear of
1.4bn * 0.678 = 949.2m devices. Of which it seems 1.9m, or 0.2%, have bought. (This doesn’t allow for people owning multiple devices, but the incidence will be very low compared to the 949m devices available.)

• The absolute number of Android Wear devices in use is still really low.
• A total of 1.2m have been sold since February
• It’s tiny compared to any estimate of the number of Apple Watches sold since the launch in April, which varies by analyst; Canalys estimates that it has shipped 7m in two quarters, which compares to 1.2m Android Wear sold
• These may be the lull before the storm of purchases on Black Friday/Christmas, but abandonment could be a problem
• Android Wear, despite being first to market, suffers from a lack of brand visibility, and visibility overall. Kantar ComTech released a survey in October based on a study from August which found that in the US,

Among panelists who knew what a smartwatch or smartband was, 92% connected Apple to the category, far more than any other brand. This was followed by Fitbit in second place with 47%, with Google (34%) edging out Samsung (33%) for third place.

That doesn’t leave a lot of room for others, at least in the US buyer’s mind.

I’ll keep tabs on Android Wear, absent Google releasing any figures. But for now, this is starting to look like an interesting question: can a device category succeed if it doesn’t have a successful Android version?

6 thoughts on “If you think the Apple Watch is a ‘flop’, try this estimate for Android Wear device sales”